I picked up Knuffle Bunny: A Cautionary Tale by Mo Willems because a children’s librarian told me to. I didn’t expect it to fit in so well with a line from the poem we are learning By Heart this month from Kate Baer’s “Motherload,” which mentions “heavy- / bottomed toddlers in all their mortal rage.” Those words perfectly describe our tiny hero, Trixie.

Even though the very first sentence tells us this story occurs before Trixie “could even speak words,” I was still surprised when the first words out of her mouth were “aagle flaggle klabble!” followed by “blaggie plaggie!” and “wumpy flappy?” and worst of all “Snurp.” Parents, if you’ve heard the dreaded “Snurp,” you know you have done something very, very wrong. In this story Daddy has left Trixie’s stuffed animal, Knuffle Bunny, in the washing machine at the laundromat, an error deserving of her hearty bawl (“Waaaa!”) followed by her going “boneless.”

To Daddy’s credit, when Mommy points out his mistake — one which she recognizes immediately — he runs back to the laundromat to look for Knuffle Bunny. One of my favorite illustrations is when Daddy sets his face in a determined scowl and rolls up his sleeves: “So Trixie’s daddy decided to look harder.”

His determination pays off, and the stuffed animal is found. Then Trixie says her first words: “Knuffle Bunny.”

I used to speak Toddler much more fluently. I assume that when I become a grandmother, the nuances will return.

Knuffle Bunny mostly takes place at a laundromat about four blocks from the Brooklyn Public Library Park Slope branch. That library now has an 18-inch-tall bronze statue of Knuffle Bunny that toddlers and bigger lovers of this book can snuggle up to. The cartoon-like illustrations of Trixie and the people in the book are contrasted against black-and-white renderings of iconic spots of this area of Brooklyn.

Mo Willems won a Caldecott Honor for this book and for two others. For a while he worked on animated sketches for Sesame Street, where he earned six Emmy Awards, but he wanted to write and illustrate books. That went so well that he’s gone on to write three musical adaptations of his stories. He’s the first artist-in-residence at the Kennedy Center.

One reason I enjoyed Knuffle Bunny so much is that even though I am a grown woman, sometimes I feel as misunderstood as Trixie. I find myself speaking and waving my arms and deploying every centimeter of my big hazel eyes, and yet no one hears. That makes me feel fussy too. Maybe I, too, should consider going boneless. (It worked for Trixie.)

Dearest Trixie, I do beg you to forgive your father. He really is trying. We grownups, we are slow to hear and quick to speak. You cannot see inside our heads, but they are full of multi-colored blocks, constantly tumbling over. We know your language is pure and bright, but we have forgotten our mother tongue. Show us some mercy, please. We know you did what you had to do.

For our next Children’s Book Club, Friday June 11, we’ll read a love story set in El Paso, Aristotle and Dante Discover the Secrets of the Universe, by Benjamin Alire Sáenz. (I cannot recommend the audiobook highly enough, read by Lin-Manuel Miranda.) 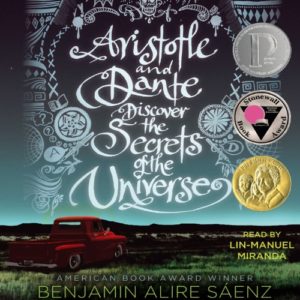