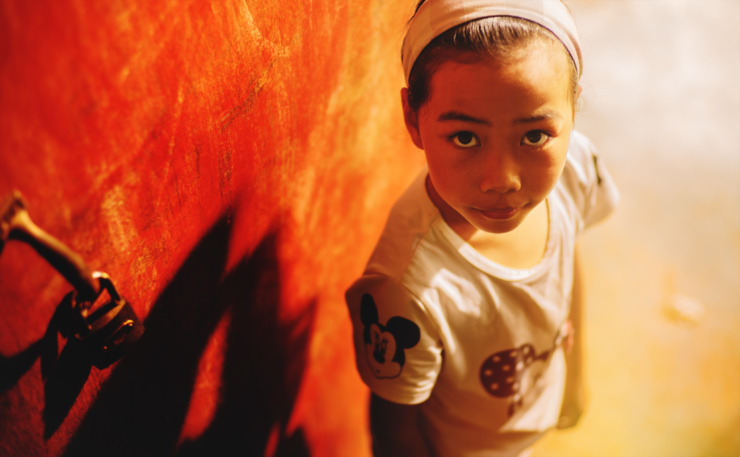 Every December I reread Charles Dickens’ A Christmas Carol. And every year I think I’ve found all there is to find. Until I find something new.

In Stave II, when Ebeneezer Scrooge visits the school of his past and encounters himself as a lonely boy, comforted only by reading, something extraordinary happens — more extraordinary than three ghosts. Suddenly a man, in foreign garments, wonderfully real and distinct to look at, stood outside the window, with an ax stuck in his belt, and leading by the brindle an ass laden with wood.

‘Why, it’s Ali Baba!’ Scrooge exclaimed in ecstasy, ‘It’s dear old honest Ali Baba! Yes, yes I know! One Christmas time, when yonder solitary child was left here all alone, he did come, for the first time, just like that. Poor boy!’”

As in the character from “Ali Baba and the Forty Thieves” one of Scheherazade’s tales from Arabian Nights, or The Thousand and One Nights. A storybook person, come in the flesh.

But wait! There’s more from a French fairytale.

‘And Valentine,’ said Scrooge, ‘ and his wild brother Orson; there they go!’”

And more tales from Scheherazade.

‘And what’s his name, who was put down in his drawers, asleep, at the Gate of Damascus; don’t you see him?’
[…]
‘And the Sultan’s Groom turned upside down by the Genii; there he is upon his head! Serve him right! I’m glad of it. What business had he to be married to the Princess?’”

And back to England and Daniel Defoe’s Robinson Crusoe.

‘There’s the Parrot!’ cried Scrooge. ‘Green body and yellow tail, with a thing like a lettuce growing out of the top of his head; there he is! Poor Robin Crusoe, he called him when he came home again, after sailing round the island. Poor Robin Crusoe, where have you been, Robin Crusoe? The man thought he was dreaming, but he wasn’t. It was the Parrot, you know.’”

Do you see what happened? Scrooge’s favorite characters actually came to life while he read when he was a boy. And so when he goes back to Christmas past, those characters are as real as his old classmates.

This is why we read. To have characters speak to us. To have their images as clear in our minds as our loved ones. This might be called reading generously.

Over 2020, our monthly reading roundup has been guided by a search for wisdom. Poet William Stafford has been our guide with A Ritual to Read to Each Other. Even though the poem talks about an elephant parade, it has a way of being the light in the darkness around us. It gives clarity.

But clarity and wisdom sometimes only get us so far. We can know what to do and still not want to do it. How do we keep from becoming a “A squeezing, wrenching, grasping, scraping, clutching, covetous, old sinner” like Ebeneezer Scrooge? How do we get from that mizer to a man who says, “I am as light as a feather, I am as happy as an angel, I am as merry as a schoolboy. I am as giddy as a drunken man”?

Tweetspeak Poetry’s 2021 theme is Generous, and this column will become Reading Generously. We’ll spend the next twelve months exploring what that means.

Part of what that means for me is rereading books like A Christmas Carol. It’s a way to admit I haven’t absorbed all the book has to offer. Ali Baba was always there, but I never noticed him until now, probably because a book podcast I love is reading those thousand and one stories. Each year as a reread this story I get to watch Scrooge come alive. He became generous with others because he first became generous with himself — the lonely little boy who found friends in books:

Some people laughed to see the alteration in him, but he let them laugh, and little heeded them, […] His own heart laughed, and that was quite enough for him.”

Poetry
A Child’s Garden of Verses, Robert Louis Stevenson (his poetry came up in both Peace Like a River, read last month, and The Magician’s Book, this month)

Middle Grade and YA
The Boy, the Boat, and the Beast, Samantha M. Clark (Writers’ League of Texas recently did an online workshop with her)
Dry, by Neal Shusterman and Jarrod Shusterman (a climate change thriller)

Made Progress
How We Fight for Our Lives: A Memoir, Saeed Jones (also a poet!)

1. Have you ever actually read A Christmas Carol? If not, make it your December resolution. Then watch the Muppet version and be amazed how much they got right.
2. What fictional characters seemed real to you as a child? Or as an adult? (This is a judgment-free zone.)
3. Share your November pages. Sliced, started, and abandoned are all fair game.