We have been fooled into taking the short view. The trees know this.

In the little barely-blue room, where I’m sitting to write to you today, there is a small oak vanity table that once belonged to one of the great-great-grandmothers in my family. Sometimes I imagine her sitting in the tiny chair that accompanies it. What does she see when she looks into the oval glass, with its floral-carved crown? More than herself, I suspect, even though she would not know to see me as I am now, here in this room with what once belonged to her.

Not knowing everything that’s to come is not the same as being short-sighted.

“If Darwin had studied trees, we might have a whole different view of things now,” my daughter recently said to me. After supper, she’s been reading us The Hidden Life of Trees.

Trees, who can live for thousands of years, take the long view, and for this reason they are very, very kind to all their members. Relying on an underground network of communication via roots and fungi, they will sometimes do things like send sugar and water to threatened trees on the other side of the forest, temporarily giving up what they could take for themselves alone. What the trees understand is that the health of the whole forest depends on the health of even its weakest members, for if they let the weak trees suffer and die, then too many gaps open up in the overstory, and then the wind can come in and wreak havoc, knocking even the strongest trees down. Trees, oddly, to our eye, will even take care of mother trees that died long ago, sending sugar and water to still-living roots whose trunk and branches turned to humus hundreds of years prior.

Though our library is now closed to the public, I’m grateful that I happened to have Farmacology on my book pile before they told us to keep their books until further notice. Written by physician Daphne Miller, it’s a fascinating look at taking the long view with one’s health—supporting the whole person by first supporting the whole community that makes up a farm. She also suggests we think less in terms of diseases we want to kill and more in terms of health we want to build from the inside out. The book is worth reading in its entirety, but today it simply made me think to make pine needle tea. (Please note that the type of pine is important, if you try this at home. Some are toxic. And never use the bark or twigs. Just the needles.) I don’t usually get sick, and if I do it passes quickly, but a few serious stressors have been pressing in since early this year, so I’m ill, and I can’t get out from under it. Today, I turned to the trees.

Recently, we ran the poem Small Kindnesses in Every Day Poems. I want it to be true, so very much, but I fear this part might be getting in the way for many of us:

We have so little of each other, now. So far
from tribe and fire.

The idea in the poem is that we therefore rely on “Only these brief moments of exchange,” to do the work of being closer to tribe and fire, to do the work of having more of each other. But I’m thinking we need a longer view, that we consider building more than “fleeting temples.”

The white pine which today gave up her needles for my tea was planted by someone I extended a secret kindness to, while he was dying of cancer. It was a small kindness of solidarity. I decided that since his life was being eclipsed I would eclipse something particular in my life. I did it for a year.

The house I now live in belonged to him and his wife. After he died, she eventually met someone and began a second chapter in her life, moving all the way to Wyoming, where she is happy. The white pine, she told me, weeks before I moved into this home, was planted by her husband twenty years earlier. He had rescued the tree from a lot up the street that was being sold and cleared. It was a long view, though it could not see what was to come.

Thank you, I whisper to him now. 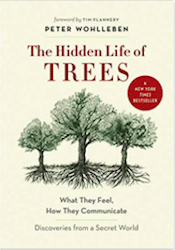