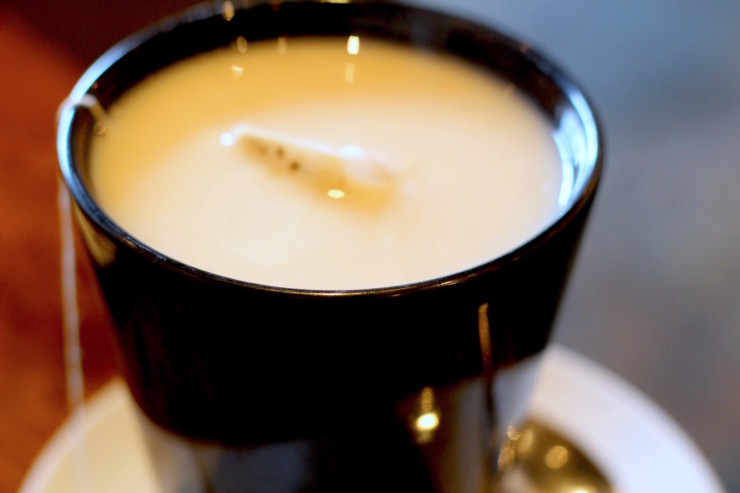 The first rule of motherhood is this: as soon as you create a plan, it is almost sure to be disrupted by your children or the weather.

That is why I am not writing to you from the attic today, even though I’d intended to tell you about the little half-moon window that looks out over the beautiful Hudson River. It is also why I did not go to Starbucks today for a feast of the senses. Rather, I went to First Village Coffee. Most times, your children don’t intend to disrupt your plans. It’s just a function of your relationship: you’ve organized your life around them in some way (for me, it’s driving my daughter to college) and something happens with them, so your life (and schedule) is impacted. The weather just always seems to know about these things; thus, I am pretty sure “when it rains, it pours” was coined for this very dynamic. Today, it rained. 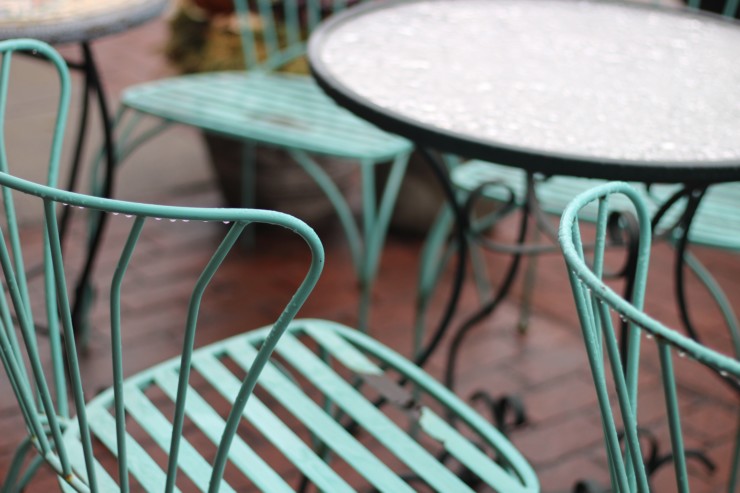 My older daughter has recently been very stressed about a particular something. She has not gotten sick literally for years, but the stress got the best of her, and illness was soon to follow. My younger daughter, never one to be left out of anything exciting, even if it is illness, followed suit. Consequently, today she did not go to college.

But I did have a plan, after all, so I am going to write to you about the poem Loch Ness, even though I did not step foot in Starbucks or get to sit in the comfy red-orange leather chair.

First Village Coffee is down on Main Street in Ossining, where, like many immigrant-run businesses in the U.S., it has contributed to the revival of a town that has suffered what a great number of towns have suffered—the loss of a viable center, and with it the loss of economic and community health.

I was privileged to catch Luis Corena between errands (he co-owns the shop with his wife Kathryn), and I asked him, “Why coffee?”

Luis, who grew up in El Salvador during its civil war, believes in the power of coffee to bridge differences (which coffee did, he noted, during that hard time). Coffee was part of his childhood. “I’m from a coffee culture,” he said. Then he continued, regarding First Village,”It’s not just about ‘here’s a cup of coffee.’ It’s about everyone we support right on down the line. The small growers and their communities. The people here in Ossining. We encourage people to stay in the shop. We don’t even serve espresso to go. We serve it in a small glass, and you drink it here. People talk to each other. They meet for work here. They hang around. It brings them together.” 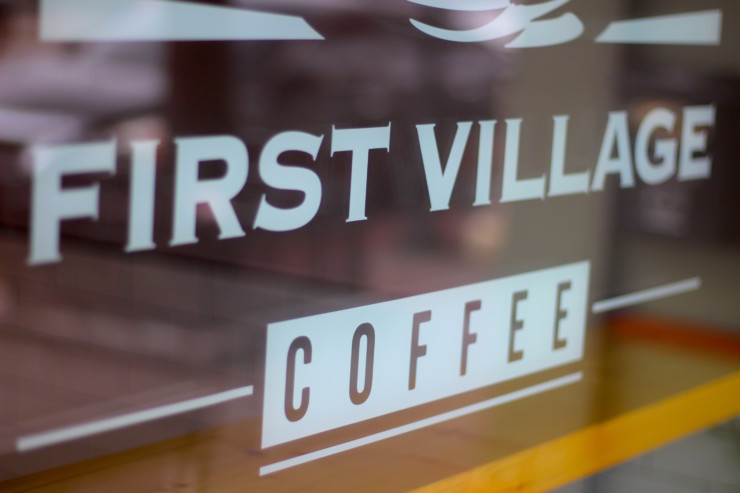 After I went to First Village, I drove down to the Hudson River’s edge. I was thinking to write about “Loch Ness,” while sitting on a bench overlooking the fog-veiled water (the rain had let up, I’d been at First Village for so long!), but in the spirit of plans-not-going-as-planned, the benches were drenched and not at all adequate for sitting on to write about poems (or anything else, for that matter). The day is now that kind of blue-white that makes the world soft—but the attic dim—so instead of sitting upstairs with the half-moon window in view, I’m sitting in my room in a dark wood rocker my mother gave me long ago, with my feet warming near the old white radiator.

In a recent radio interview, I remarked that my mother gave me two great gifts: tea and poetry. It is true. It is also probably what makes it hard for me to consider a new identity as a coffee drinker.

I often find it interesting to go back and discover something I said without having, at the time, thought too much of its implications. In this case, it’s the statement from the very first coffee shop post: “Even though I am a tea drinker.”

Rereading that, it struck me how identity-drenched the statement is. Identity is about more than who we think ourselves to be. It is also about who others think us to be. It’s about how we’ve spent our time (and our money). It’s about the words we’ve written, the things we’ve said, and the objects we own. (I own countless teas, two tea kettles, nine teapots, and many, many teacups.) Identity is wrapped up in who we hang around with. And the rituals we engage in.

The latter part of “Loch Ness,” which is written from the monster’s point of view, says this:

…I reach
red eyes to stars invisible by dawn, whisper
that I understand what it is to desire
a constellation that would not assume
I prefer to live in darkness.

You could say that the poem is about identity—the part of it that involves who others believe us to be. Nessie is feeling “winter-weary,” and like “a loon weeping.” She is seeking “warmer air,” but the viewpoint others have of her is making that difficult, if not impossible.

In the evenings, after supper, I have begun reading The Hidden Life of Trees with my daughters. The author, Peter Wohlleben, is a forester whose job it was to view trees predominantly in one way: for their economic value. For this reason, he overlooked many fascinating qualities of trees until he began running survival training and log-cabin tours for tourists, and these forest visitors would bring unusual things to his attention: a gnarled branch, a tuft of moss on bark, a bizarre tangle of roots. Today, Peter cannot cut down a tree in a violent way (yes, there is a compassionate way to cut down a tree!). His forester identity has shifted.

Growing up, tea meant my mother. Coffee meant my stepfather. Cruel, crude, and spirit-crushing, he sat at the dark kitchen table day after day, veiling the air with cigarette smoke and downing cup after cup of Maxwell House coffee, while ordering my mother around. I liked the dark blue cans and the way you could trace your fingers in their grooves. I was never allowed to taste the expensive (for us) brew.

In the world of conflict resolution, some people believe that all conflicts are resource-based. Others believe they are all, down deep, identity-based. I tend to go with the latter. I have watched people endanger their very existence on the resource level, for the sake of identity.

It is important, I think, to have a strong identity. It keeps us directed. It gives us a sense of belonging. But it is also important to be able to shift, when new information comes our way: new information about ourselves, or others, or the world.

Every day, I read a poem from Every Day Poems, knowing that these poems might change nothing—or they might change everything. Like Wohlleben’s forest visitors, the poems come to my inbox and they point out things I hadn’t noticed. They ask me questions. Or I ask them questions. They give me a chance to shift my perspective and, yes, even small parts of my identity that sometimes grow into larger trends within my heart and mind.

At First Village today, feeling winter-weary, I ordered my favored Earl Grey. I even got an Earl Grey and blackberry scone. I am, for now, still a tea drinker. But that may change. We’ll see what the weather (and poetry) can do. Lift the first line of “Loch Ness,” which begins “Sometimes on quiet mornings…” to craft a poem with Identity at its heart. Set your poem in the coffee shop if you like. Or take it home to your own table. Want to put on a persona? Try writing your poem from the point of view of someone or something that has felt misunderstood.

A man talks to his mother
about his sister:

Have you heard from her?
She never seems to be there.
We need to get everything
out of that utility closet.
It’s a mess, he said.

His old vacuum cleaner.
A roll of insulation.
Personal things, she said.

I can fly into Tokyo
and make my way to Laos.

Just as long as you’re back
by October third.

A woman with short hair
speaks in a stentorian voice:

Some friends of ours renewed
their wedding vows. But we do
it different. We shoot
things, have big bonfires.
There was fire spitting.

In the corner, in a plush overstuffed
chair, a woman opens an envelope.
Handwritten. She turns the letter
over in her hands. Sniffs it,
feels the indentations from the point
of the pen. Opens it and starts
to read. Sips from her coffee cup,
puts her head into her hands and starts
to shake with silent, uncontrollable sobs.
We have traveled too fast over false ground.

A Book That Stirs Tea & Identity, from L.L. Barkat “The Novelist is quite an engaging, insightful, and illuminating read. Once again, the author, L. L. Barkat, delivers and in this novella, has managed to incorporate storytelling in the most gentle and comprehensive manner with some of her most breathtaking and moving poetry.”

Buy The Novelist on Amazon now