Curious George is a story of resistance.

H.A. Rey, born Hans Augusto Reyersbach, and his wife, Margret, were Jews who fled Paris on bicycles two days before the Nazis invaded. In their 75-mile journey they were stopped and searched, but the only thing the official found was a manuscript for a children’s book about a monkey. He let them go.

So it appears George, the curious, (then called Fifi) got out of that scrape, just like he gets out of all the scrapes in the story that bears his name.

After a journey through three countries in four months the Reys finally reached their destination, New York City. The so-called “monkey book” was picked up by a publisher within a week. Curious George was published in 1941. 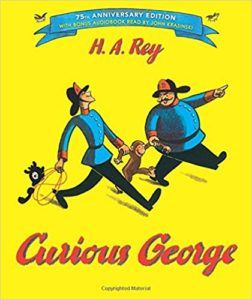 I’ve owned this book for as long as I can remember. I never questioned why the man with the big yellow hat took George out of Africa — I suppose I should have. I simply liked the little monkey who “promised to be good. But it is easy for little monkeys to forget.”

George personifies a human child. He can understand speech. He can think. He eats and sleep and dials a phone. (We’ll ignore the mention of George smoking a good pipe. After all, it was 1941.) And most importantly, he can get into scrapes. So many scrapes!

He falls overboard, he lands in jail, he flies away on a large bunch of balloons. Somehow he gets out of each scrape, either through the help of others or through his own ingenuity. The story ends with George living happily ever after at the zoo with bears and elephants and penguins and camels and zebras and kangaroos and giraffes and rhinos and tigers and even a turtle and a frog, all pictured.

If this is a resistance story, then what qualities does George have that make him so resilient?

It did not surprise me to see the word curious so many times, six in all. But I was surprised to find tired in three.

Curiosity is tiring. So is resistance.

Verbs that describe George in the story include trying, struggling, walking, running, escaping, reaching, and holding tight with both hands — all of which sound quite tiring. So is eluding a foreign power intent on your destruction.

How does a little monkey, or a young married couple, find happiness amid such tiring resistance work?

It seems ridiculous to be thinking about children’s books,” Rey wrote to a friend. “[But] life goes on, the editors edit, the artists draw, even during wartime.”
Rey was speaking of the book he and his wife wrote in 1939, called Raffy and the Nine Monkeys , in which the monkey that became Curious George first appears. They went on to write six more stories about George.

What makes you happy, even during wartime? Is there some small thing you can create? A way to keep your curiousity sharp despite being so very, very tired from all that resistance? Perhaps a silly little monkey book will be the balloon that carries you to safety.

The next Children’s Book Club will meet Friday, February 14. In honor of the occasion we will read a short chapter book titled Junie B. Jones and the Mushy Gushy Valentime by Barbara Park. Because this year, as in the story, “Valentime’s Day came on Friday!”