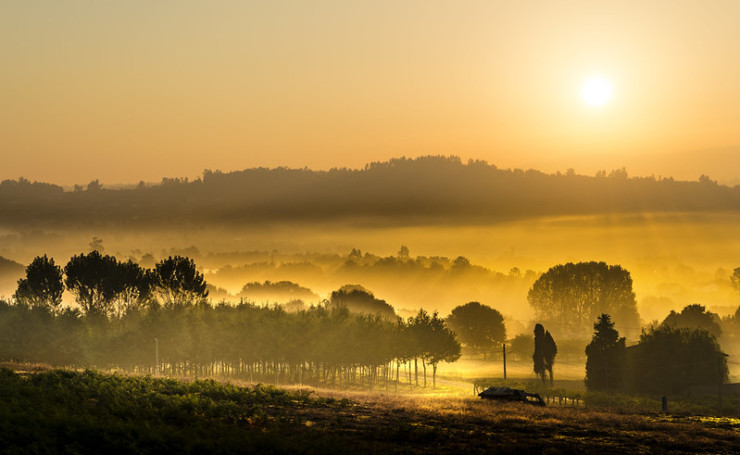 One of my assigned duties as Poet Laura is to “Write, draw attention to, explore the history of, or leave on bulletin boards — poems about Lauras.” These past few weeks, I’ve been on the job.

Lauras and poetry have a significant history. The fourteenth-century Italian poet Francesco Petrarch wrote hundreds of poems, mostly sonnets, about Laura de Noves, a woman he admired from afar but never courted because she was married.

But wow, was he into her:

Sweet air, that circlest round those radiant tresses,
And floatest, mingled with them, fold on fold,
Deliciously, and scatterest that fine gold,
Then twinest it again, my heart’s dear jesses;
Thou lingerest on those eyes, whose beauty presses
Stings in my heart that all its life exhaust,
Till I go wandering round my treasure lost,
Like some scared creature whom the night distresses.
I seem to find her now, and now perceive
How far away she is; now rise, now fall;
Now what I wish, now what is true, believe.
O happy air! since joys enrich thee all,
Rest thee; and thou, O stream too bright to grieve!
Why can I not float with thee at thy call?

Although I know they’re out there, I haven’t found many post-Petrarchan Laura poems — yet. So it’s a good thing I’ve been tasked with adding a few to the canon. But first, a little history on the name.

Laura is derived from laurus, which is Latin for “bay laurel,” the leaf used in victory wreaths and savory soups. Laura was a very popular name in the United States in the late nineteenth century and remained in the top 50 into the early twentieth century. Then it dropped in popularity, peaked in the late ’60s, dropped again in the ’70s, experienced a brief revival in the ’80s, then dropped again, seemingly for good. For 2019, the name was number 274 in popularity, 67 down from 2018 and 264 down from 1969.

The youngest Laura I know is 17, the oldest, 58. I have over a dozen Facebook friends named Laura— and that’s not counting the Lauries, Laurens, and Laurels in my life. They include previous classmates, neighbors, and coworkers; school moms; and a number of literary Lauras. In fact, L.L. Barkat, founder and editor of Tweetspeak Poetry, is—you guessed it—a Laura, and an influential one at that. I dedicated my book How to Read a Poem to her.

Since starting my post as Tweetspeak’s first Poet Laura, I’ve written two Laura poems: one about a Laura I know pretty well, and the other about one I’ve never met.

First, Laura Brown. Even though we live hundreds of miles apart, we’ve gotten to know each other quite well over the years at various writing conferences, workshops, and retreats. (We’ve also developed a habit of playing Irish music whenever we’re together—she on whistle and I on fiddle.) This Laura is a force of inspiration, laughter, and encouragement wherever she goes.

I composed this found poem using a number of phrases from Laura Brown’s own Facebook and Instagram posts. As a keen observer and devotee of life’s daily beautiful moments, Laura demonstrates a spirit of gratitude I’ve come to admire. In writing a poem about her, I wanted to inhabit her words and allow them to inhabit me.

And look! It’s a new day with no mistakes in it yet,
leaves and lines and light
sluicing over the bookcase.

She climbs into the writer’s seat,
peace lily riding shotgun on a table
among daubs of urban orange.

on what she has seen and heard,
her vision and pen
two bumblebees working the same thistle.

A drain rack of clean dishes.
Warm stack of folded laundry.
Toasty edges of cheddar crackers,
and Pittsburgh wound up
in a gauze of snow.

The day’s beauties draw near
as fragile as they depart:
an old woman’s face
rising out of a dab of suds,
adolescents marching
into the light of their moonrise drums.

Day is done, but morning

keeps breaking and breaking.
She tells us this, even when
we forget, even when we don’t want
to know. Like it
or not, it never gets old.
Even when light hits a dead end,
it finds a way out.

My next poem was inspired by Laura Lees, who is married to Jake Lees, another writer I’ve crossed paths with at conferences over the years. Although I’ve never met her, we became Facebook friends, and I’ve taken utter delight in her fun-loving pictures and posts. I asked Jake to send me a few photos he thinks really capture her spirit, and he happily obliged. (They’re pretty much the cutest couple ever.) I suppose you could call this one an ekphrastic poem of sorts:

and when a coffee mug blocks
those lips, your eyes
(autumn-pond blue with fish

flicking up sparks) say the same thing:
the world is ridiculous, and I love it
so much. Come, let’s catch it if we can.

I’ve got quite a few more Lauras to commemorate in verse over the next year. Chances are pretty good that you know a Laura or two as well (maybe not a newborn baby, given the stats, though that would be a big bonus). What if you challenged yourself to write your own Laura poem? What lovely Laura would you celebrate, and why?