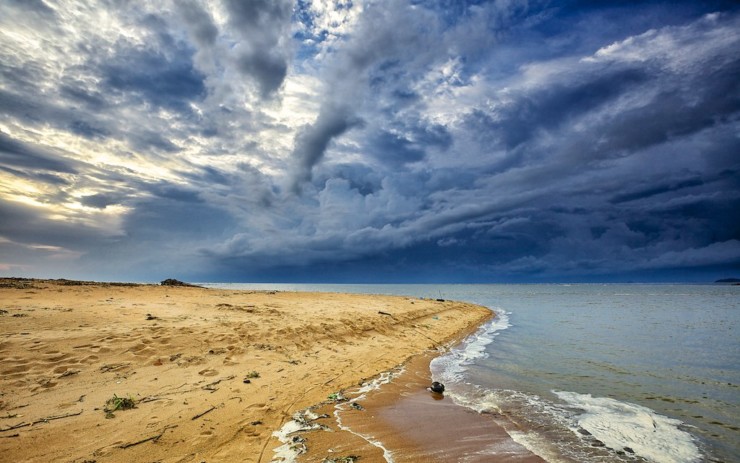 Editor’s Note: This patron-only post is a reprint of Chapter 21: Lighthouse in New Jersey • Should You Publish? from Rumors of Water: Thoughts on Creativity & Writing

I had driven two hours South to visit a friend in New Jersey. She’d told us about the lighthouse, oldest one in the country. My girls wanted to go. I wanted to go. It might help us stop thinking about Sonia’s knees.

Just a week before this day, Sonia had come to me one morning and wakened me, though she knows I don’t like to be wakened.

I’d opened my eyes and seen without seeing. Known it was Lyme Disease. Two months earlier, I’d picked three ticks off my girl’s sweet little body, called the doctor who said don’t worry yet. I’d watched for fever, waited for a rash. Nothing. But now in this moment, I knew.

I sat up, pulled the sheets back. “Sonia, let me see your knees.”

Her knees were hot, and swollen to three times their size. They looked like her grandmother’s knees had looked after surgery, purply and tender. She was in pain but refused to cry.

Now, in the lighthouse, knees still fairly swollen, antibiotics fighting inside her, she wants to climb one-hundred-and-one narrow spiral steps. And I say, “Okay, you can try,” because I don’t want to hold her back if she thinks it is worth the struggle. I doubt she can make it to the top, but I don’t want to make the decision for her.

So we start, Sonia leaning into me, taking each step slowly and stiffly like an old woman. We touch stone walls, feel the coolness of the place. We lag behind the rest of the group, hear them laughing and talking above. At the halfway point, it is finally too much and Sonia can’t go on. I give her a hug, look into her eyes and say, “I’ll go up with Sara,” because I am in a dilemma; Sara wants to go to the top, but she is nervous to go alone, and Sonia cannot move another inch. She sits down on a cold metal stair, leans against white walls. “I’ll wait,” she says, eyes steady, filled with longing.

Sara and I climb to the top. The last ascent isn’t stairs at all, but a metal ladder with nine tiny, slippery rungs. The guide has to open a hatch so we can ascend to the lookout area. We take our turns on the ladder, and the guide closes the hatch when the last of us wriggles onto the platform.

“I can see New York City!” I say, more than once. “It’s amazing!” We are taking pictures, marveling about the farmhouses to the south, the city to the north, the water to the east. We are loud, apparently, and our words slide down to Sonia, who can hear what she’s missing.

After about ten minutes, the guide says, “Thanks for coming.” She has told us that we really need to keep to the schedule, because she has another group waiting to climb. She turns to open the hatch, to let us go back down, and I hear someone whimper.

I look down and it is Sonia.

She is crying, and I catch my breath. I look to the guide and mouth, “Please?” I know the schedule is the schedule, but here is my girl with tears streaming down her face, and she has come up dizzying stairs all by herself, pulled herself past pain because she wants to see.

Sometimes writers tell me they want to write a book. I say, “Are you sure?” I don’t want to hold them back, but I want them to think about what they’re getting into. Two of my books plunged me into sorrow and emptiness when I wrote them. Both are memoirs, and they pull from hard places. Each was a climb I felt ready for because I’d already experienced a measure of healing. I’d told the stories in smaller pieces before— to friends, over many years.

As writers, we have to judge these things. We may not be ready. I’ve met writers who backed off from an idea once they realized what it was going to take. I’ve backed off from my own ideas I knew I wasn’t ready to tackle. Sometimes the reasons can be intensely personal: we can’t tell a story that is still too raw. Sometimes the reasons involve timing or a need for growth; for instance, Sara wants me to write a fiction book, and I want to do it, but I’m not ready to invest the time it would take to learn that special craft.

Sonia looks to the tour guide and waits for an answer. She looks at the last nine stairs. These are the worst; they aren’t stairs at all, but rungs. No one can carry her up them. They are too narrow. They are perfectly vertical.

The guide looks at her watch. She’ll be late if she extends this opportunity. But she tells my girl, “Yes.”

Photo by Christopher Harriott, Creative Commons license via Flickr. This is a reprint from Rumors of Water: Thoughts on Creativity & Writing by L.L. Barkat. Used with permission.