Mom, do you still love Dad?’

‘Please don’t ask me,’ she said. I didn’t know what to do, so I just sat there until she wiped her eyes and blew her nose and said, ‘Come on, Leigh, let’s go out.’

So we got in the car and drove to that fried chicken place and picked up a bucket of fried chicken. Then we drove down by the ocean and ate the chicken with rain sliding down the windshield and waves breaking on the rocks.

There were little cartons of mashed potatoes and gravy in the bucket of chicken, but someone had forgotten the plastic forks. We scooped up the potato with chicken bones, which made us laugh a little. Mom turned on the windshield wipers and out in the dark we could see the white of the breakers. We opened the windows so we could hear them roll in and break, one after another.

‘You know,’ said Mom, ‘whenever I watch the waves, I always feel that no matter how bad things seem, life will still go on.’ That was how I felt, too, only I wouldn’t have known how to say it, so I just said, ‘yeah.’ Then we drove home.”

That’s why Beverly Cleary is the beloved author she is—that realism. We know how the mom feels without having to be told. We know how Leigh feels, even when all he can say is “yeah.” We are in the car with the two of them, beside the waves, scooping mashed potatoes with chicken bones. 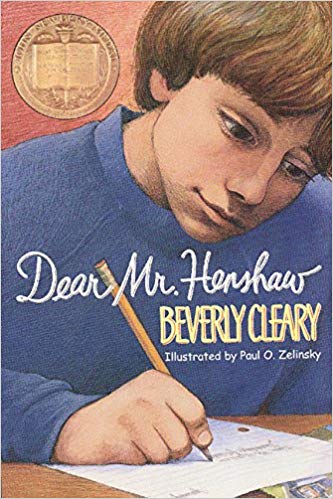 I knew there was a gap in my Newbery-winner knowledge: Dear Mr. Henshaw by Cleary, who just turned 103 years old. I liked Cleary and the universe of characters she created who live in Grant Park, Portland, Oregon, but this book and its characters live outside that realm. I wasn’t sure I wanted to get to know Leigh Botts of Pacific Grove, California. That is, not until Callie Feyen dedicated a chapter to Dear Mr. Henshaw in her new book, Twirl. Because Callie discovered the book in her childhood library, I went to my library to find this title with J F Cle on the spine and a Newbery Award sticker.

The entire book is letters — or diary entries are written as letters — addressed to fictional children’s author Boyd Henshaw. We never read Mr. Henshaw’s letters to Leigh, nor do we meet him. But we do hear a description of him from another children’s author, Angela Badger: “He’s a very nice young man with a wicked twinkle in his eye.”

He’s the kind of author who responds to fan mail from a fifth-grader. When he answers Leigh’s ten questions, he does so with that “wicked twinkle.” When Leigh’s teacher makes him read Mr. Henshaw’s answers to the class, this is what happens:

The class laughed and Miss Martinez smiled but she didn’t smile when I came to the part about your favorite animal was a purple monster who ate children who sent authors long lists of questions for reports instead of learning to use the library.”

Mr. Henshaw then sends Leigh his own list of questions, including “9) What bothers you?” and “10) What do you wish?” As Leigh writes his answers, he discovers what’s really going on inside him — having trouble at a new school, missing his dog, missing his dad.

Mr. Henshaw suggests Leigh start writing in a diary and addressing it to someone, so Leigh buys a composition book (that’s what I write in too), and he starts each entry with the date and Dear Mr. Pretend Henshaw. It’s enough to help him become a writer. And because this is a Cleary book, when Leigh enters a contest, he does not win first prize. To make him an award-winning writer right from the start would ring false.

Dear Mr. Henshaw won the Newbery Medal in 1984. It consistently makes both teachers’ and librarians’ lists of top books for children. Cleary herself has won the Children’s Literature Legacy Award, the National Medal of Arts, and she’s been considered for what’s known as the Nobel for Children’s Literature, the Hans Christian Andersen Award.

But I think the niftiest honor she’s received is the three statues of her characters from the Ramona series that are in Grant Park’s The Beverly Cleary Sculpture Garden for Children.

I wish Leigh Botts had a statue there as well. But even more, I wish there were a statue of the elusive Mr. Henshaw. No one would know who this sculpture of a nice young man is supposed to be, but everyone would notice the wicked twinkle in his eye.

The next Children’s Book Club will meet Friday, June 14. We will read Wangari Maathai: The Woman Who Planted Millions of Trees, by Franck Prevot, illustrated by Aurélia Fronty.