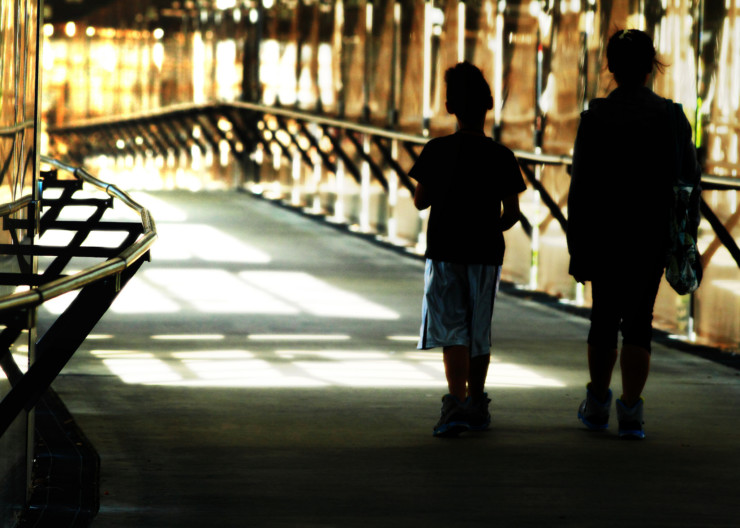 When I come across a brilliant writer pulling off second person brilliantly, I’m tempted to think it’s not that special. It’s just another tool in the writer’s toolbox that I might make use of one day. Maybe. It’s like when author Ehud Havazelet writes in The New York Times, “You ask, so how different really is Second Person? Isn’t it just a choice of color, say, or tonality, the way a composer might choose whatever key she likes to compose a piece in?”

But when I come across it and it’s done well, I also feel a great sense of satisfaction. The writer has used the second person narrative voice, and I have read it, and we have become co-conspirators in a rare occurrence.

In Citizen: An American Lyric, poet Claudia Rankine draws her readers into the book’s scenes and stories using the second person, creating a more personal experience that might catch her readers off guard.

Rankine gathered her own interactions, as well as the interactions of others, to compile the vignettes. The ambiguity of who was involved in the situations described, along with the use the second person point of view, creates a sense of intimacy that might not be as effective if the book were written in the first or third person. Because readers can’t assign what they’ve read to a specific individual and because Rankine’s words hook readers, they have more room and permission to imagine themselves as her main characters. She writes:

The rain this morning pours from the gutters and everywhere else it is lost in the trees. You need your glasses to single out what you know is there because doubt is inexplicable; you put on your glasses. The trees, their bark, their leaves, even the dead ones, are more vibrant wet. Yes, and it’s raining. Each moment is like this—before it can be known, categorized as similar to another thing and dismissed, it has to be experienced, it has to be seen… The moment stinks. Still you want to stop looking at the trees. You want to walk out and stand among them. And as light as the rain seems, it still rains down on you.

In this interior scene, readers are invited to make the text their own thoughts. They can imagine the rainy morning and what it would be like to look out a window to discern the trees’ details. And, readers can better connect with the idea of experiencing something through seeing because of the vivid image painted using the second person.

Another scene that brilliantly employs the second person narrative voice is:

Because of your elite status from a year’s worth of travel, you have already settled into your window seat on United Airlines, when the girl and her mother arrive at your row. The girl, looking over at you, tells her mother, these are our seats, but this is not what I expected. The mother’s response is barely audible—I see, she says. I’ll sit in the middle.

Because readers don’t know the race, ethnicity, or appearance of the person already seated in the airplane when the girl and her mother arrive, they can again easily imagine themselves in that row. Use of the second person further facilitates this dynamic. Also, because of the lack of clarity about the person interacting with the girl and her mother, readers’ assumptions are exposed; while they imagine what this person looks like, their own biases may be more apparent.

In another scene Rankine writes, “And when the woman with the multiple degrees says, I didn’t know Black women could get cancer, instinctively you take two steps back though all urgency leaves the possibility of any kind of relationship as you realize nowhere is where you will get from here.” Rankine’s readers know that the person who takes two steps back is a Black woman. They know the woman speaking to her is not Black and is at least intelligent enough to earn more than one degree. In one quick slice, it is made clear: intelligence does not shield a person from painful ignorance.

By the end of our experience with Rankine, we understand that the second person can help remove illusions—it can switch people’s points of view. And that’s something we writers may not have realized was so within our power to do, simply by choosing, with care, which perspective to use.

Seeing Rankine’s use of second person narrative voice makes me want to give it a try and see what happens. Below, I’ve provided the before and after of an excerpt from a piece of fiction I’m writing (which is loosely based on a personal experience). I originally wrote this section in first person, but I thought I’d see how it works in second person.

What do you think? How does your sense of the piece change?

I will never forget the tiny, mirrorless bathroom that looked like it had been swallowed by lime-green ceramic tile. There was a white pedestal sink, a toilet, and a walk-in shower with no door or shower curtain. I only showered twice that week because a nurse aid had to be present. I cried the first time. The woman who watched me—I can’t remember which woman it was—sat on a stainless stool in front of the door and thumbed through a magazine while glancing up every few seconds to make sure I wasn’t drowning myself or harming myself in some way. After I undressed, I stood under the water and covered my body with my arms and hands. I didn’t know which direction to face—I didn’t know which direction would be less humiliating.

You will never forget the tiny, mirrorless bathroom that looked like it had been swallowed by lime-green ceramic tile. There was a white pedestal sink, a toilet, and a walk-in shower with no door or shower curtain. You only showered twice that week because a nurse aid had to be present. You cried the first time. The woman who watched you—you can’t remember which woman it was—sat on a stainless stool in front of the door and thumbed through a magazine while glancing up every few seconds to make sure you weren’t drowning yourself or harming yourself in some way. After you undressed, you stood under the water and covered your body with your arms and hands. You didn’t know which direction to face—you didn’t know which direction would be less humiliating.

Have you tried writing in second person? How did it go? As an experiment, try rewriting a first-person vignette into second person. Charlotte Donlon is a writer who reads and a reader who writes. She holds an MFA in creative writing from Seattle Pacific University where she studied creative nonfiction. Her work has appeared in The Washington Post, The Curator, Catapult, The Millions, Mockingbird, and elsewhere. Her first book is The Great Belonging: How Loneliness Leads Us to Each Other.