Located in Arlington, Washington, the Children’s Storybook Garden’s mission is “to enrich the mind and spirit of children through the exploration of nature, art and literature.”

Once a month, during the growing season, a librarian walks past rows of bookshelves and the book-return slot carved into the counter, then out the door of the library. After crossing the little street she enters the Arlington Community Garden. Strolling down dirt paths between boxes of cherry tomatoes, rosemary, and sunflowers she joins the Children’s Storybook Garden event. 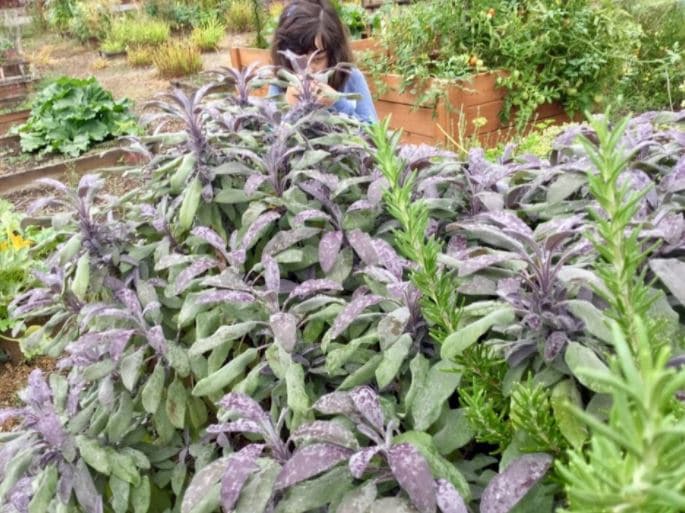 There, she’ll read to children on a blue and ivory quilt, while they enjoy a snack such as tangerines, cookies, and mini bottles of water.

After the reading, a craft time on the book’s theme begins. Projects might include creating terrariums in jars; painting fairy houses or beehive pots; and laying out leaves, flowers and twigs onto sunlight-sensitive paper.

Only a few steps away from the library itself, families can step inside before or after the event to peruse book selections available for their own storytimes. 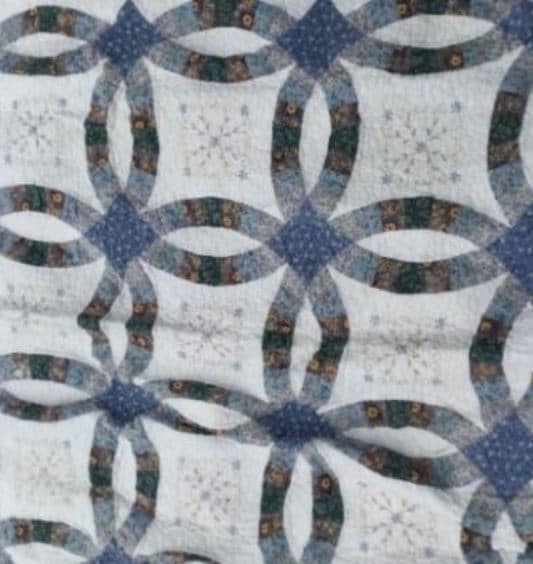 All this is offered to any child in the community for free. Supplies and labor are provided through the generosity of sponsors and volunteers from the Friends of the Arlington Library, the Arlington Art Council, as well as several others*.

Charleen (Char) O’Neal, who originally came up with the concept, chooses the stories, selects the crafts, and helps on the day of the events, along with a group of other volunteers.

My daughter “Dot,” as I sometimes call her, and I first attended one of these occasions a few years ago. I found myself enchanted with the garden setting where we listened to a story in the warmth of the sunshine, met other children and their grown-ups at the craft table (I remember a fairy-dust necklace coming home), and tossed a disk around in the lawn afterward. That was the day I joined the not-for-profit volunteer group, The Friends of the Library. 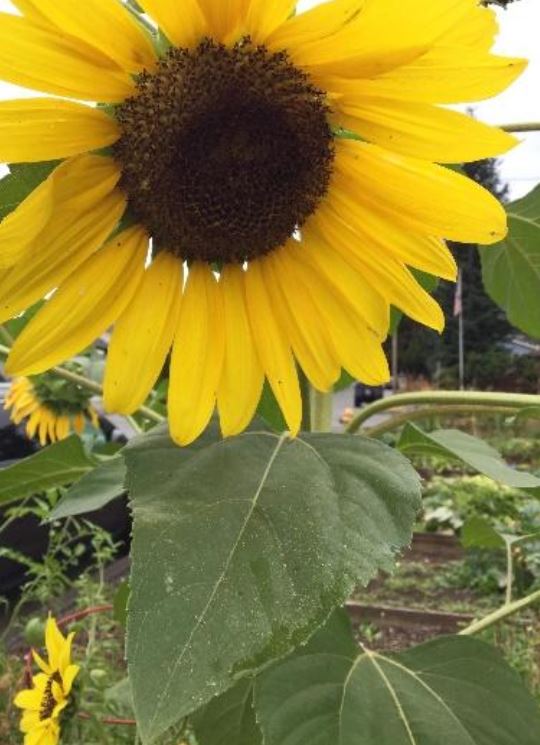 As a member, I certainly haven’t helped at all the events, but when I’ve arrived a little early to help tape down tablecloths flipping up in the breeze or fill bowls with bright little pools of paint, my daughter has enthusiastically jumped in to help.

Last year, as a second-grader, she discovered she could also officially become a member of The Friends of the Arlington Library—and would even get to wear a badge. Thrilled that kids could be genuine team members too, she eagerly filled out the membership form.

I’ve watched her take ownership of her role and search for ways to assist with tasks ranging from prepping art stations, to handing out pencils, bubble jars, and bookmarks to attendees, as well as emptying water buckets and clearing tables alongside her fellow volunteers.

At the September 2017 event, the theme centered on the book The Enormous Potato, retold by Aubrey Davis. Managing Librarian, Kathy Bullene, sat in a folding chair on the grass and read expressively. Holding up the pages wide enough so the kids could see the playful illustrations, by Dušan Petričić, she’d occasionally ask questions about the story.

When I later asked Char why she’d chosen that book she said, “I just liked it. And it talks about cooperation, which is key.” These storybook events do take cooperation to pull off between the planning, reading, purchasing, delivering, crafting, gardening, setup, clean up, and advertising. 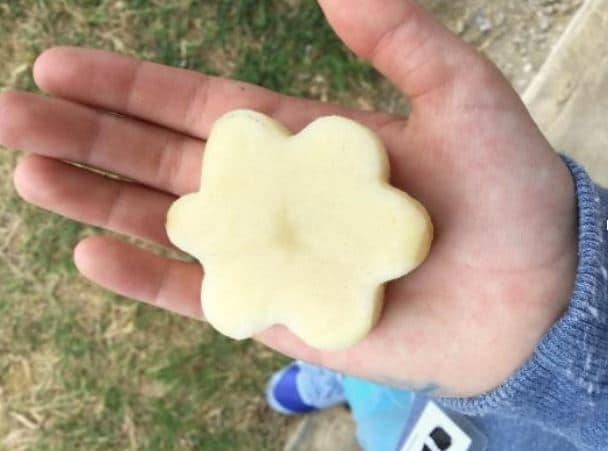 At craft time we used the potato stamps Char had cut out, to paint designs onto mini blue tote bags and T-shirts. A little boy next to me wanted to write his name on his bag. His mom wrote out the letters clearly on the disposable tablecloth, and he copied his name, letter by letter, onto the canvas. I introduced myself to the mom and we chatted about our kids’ ages, siblings, and the projects they were designing.

While the bags lay in the sun to dry, we all set off for flower-picking. Char led us around the corner to where California poppies had sprouted. My daughter noticed one of the smaller girls struggling to break the stem of a flower. “Do you want help with that?” she offered, before plucking the poppy and handing it over.

Back in the spring, Char had planted a variety of spuds like Rose Finn Fingerlings, reds, and some russets she seeded for the kids “just in case,” as she said to me.

The potato crop was boxed in by hay. Planted directly into the straw were orange Nasturtium flowers with deep-green circular leaves that remind me of lily pads. 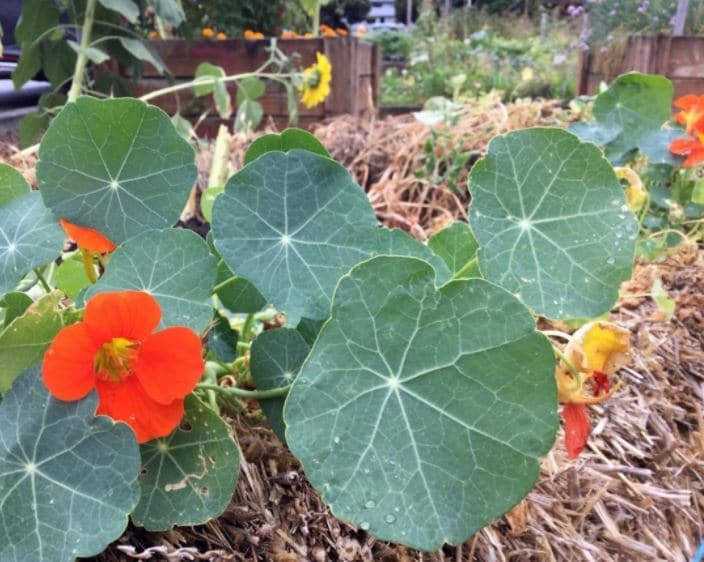 As the children chipped into the dirt with their mini spades, the pitch and speed of their chatter suddenly spiked—potato bugs! They leaned in closer to track the paths of the roly-poly critters.

My daughter stood off to the side dutifully holding baby wipes (to help the little ones with their hands when they finished) and peering around trying to see the bugs.

I offered her an out from duty. “Would you like to dig too?”

“Sure! I’ll get a shovel!” She ditched the wipes and sprinted toward the tools.

Char encouraged everyone to feel free to take clippings of the herbs and produce from the Storybook Garden’s bed or boxes anytime. Dot plucked a sprig of lemon thyme, and I showed her how to roll it between her hands to release the scent.

As everyone plunked their potato collection into paper bags and prepared to leave, she and Char handed out sunflowers almost as big as the children’s faces to each attendee as a parting gift. I said goodbye to the mom and son I met earlier at the craft time, “See you around town.” 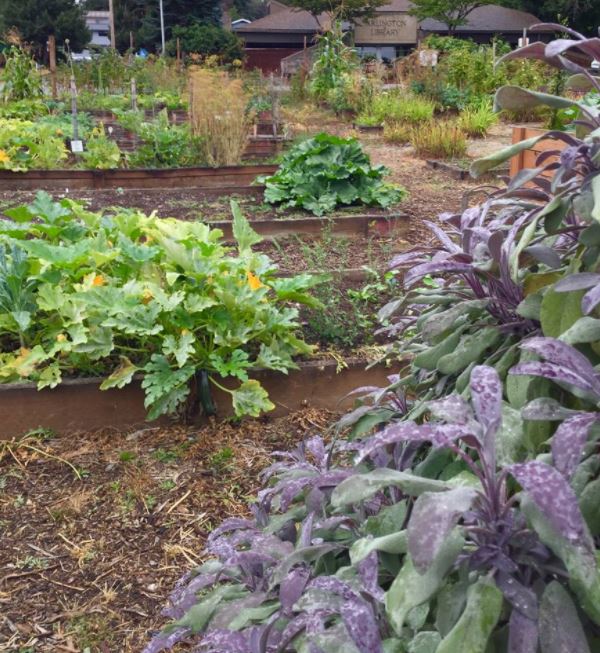 View from the Children’s Storybook Garden box overlooking others’ beds in the Arlington Community Garden, across the street from the library

Brushing dirt from our jeans, my daughter and I meandered across the street and into the library. After spending hours next door, the library felt different—a little more familiar and comfortable—like an extension of our own garden. We checked out books and packed them into the car next to sunflower petals and spuds and drove home.

I thought back to an earlier drive home from the July event. That time a librarian was preparing to read The Magical Garden of Claude Monet. After the kids were settled on the quilt, my daughter quickly walked away from the group and headed toward the craft tables, which still needed a few supplies laid out.

“Honey, the story is starting,” I’d whispered as she breezed by.

“I know, but I really want to help finish the tables.” She smiled.

On the drive home that day, she read silently in the back seat. “How does volunteering make you feel?” I asked.

Back home, I sunk our two sunflower stems into a container of water and set it on the iron porch chair. Over the next couple days, I’d see those two sunbursts each time we went in or out of our front door.

I’d think of the mom showing her son how to write his name on the little blue tote and the look on my daughter’s face when she first smelled the lemon thyme she’d crushed between her fingers.

Fall rain would soon descend on our little town in the Pacific Northwest. The autumn, and then winter weather, meant no more Children’s Storybook Garden events for the next eight months. But what had been sown and taken home would last past the growing season. 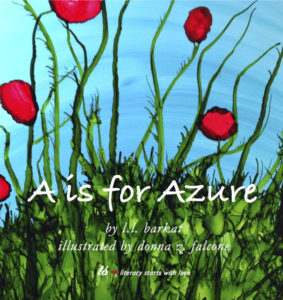 Brilliant ink-on-tile illustrations created with a secret process bring the alphabet to colorful life. Children will delight in the rich, poetic language of colors like emerald, jasmine, and quartz—while also meeting old favorites like yellow, orange and purple.

BROWSE A IS FOR AZURE NOW 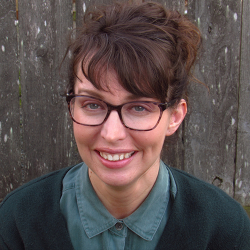 Bethany Rohde
Bethany Rohde's poetry and prose may be found in such places as: Mothers Always Write, Every Day Poems, and the e-book, Casual, published by T.S. Poetry Press. If she could spend her coffee break anywhere in the world, it would be in the imagined place she used to draw as a kid (and still does). She'd lean back against the smooth trunk of a shade tree surrounded by undulating, grassy hills and watch the sway and flow of the blades.

Bethany Rohde's poetry and prose may be found in such places as: Mothers Always Write, Every Day Poems, and the e-book, Casual, published by T.S. Poetry Press. If she could spend her coffee break anywhere in the world, it would be in the imagined place she used to draw as a kid (and still does). She'd lean back against the smooth trunk of a shade tree surrounded by undulating, grassy hills and watch the sway and flow of the blades.