— A Tree Grows in Brooklyn, by Betty Smith

If you live in my small town and want to read Eleanor & Park by Rainbow Rowell, you have to ask the librarian. It’s not shelved in the YA section. The book is frequently banned for a number of reasons, and to find out why, you don’t have to look past the first chapter. It’s set on a school bus in 1986, and it’s full of f-bombs.

I rode a school bus in 1986. That’s exactly what it sounded like. I first read E&P a few years ago, after many recommendations. The story is about first love and about families. Which means it’s about the same things that Shakespeare’s Romeo & Juliet is about. But I didn’t realize the parallels between the two stories until Callie pointed them out in her annotations of Romeo & Juliet: the full play—includes essays and annotations by Callie Feyen of The Teacher Diaries, from T.S. Poetry Press.

[This] scene is not much different from the first few pages of Rainbow Rowell’s ELEANOR & PARK. Didn’t think I could get through it because of the first page and a half. So much swearing. So many innuendos. Fantastic story, though. Parallels much of R&J. Why start off like this? What’s Shakespeare saying about teenagers? What’s Rowell trying to tell us about them?” (from Act I, Scene I) 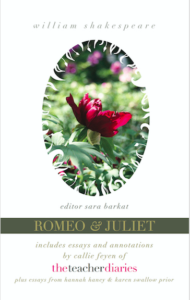 R&J starts in a public place in Verona with two male servants saying naughty things about young maids. The content is essentially no different from the content in E&P — only the words are different, as is wont to happen over a span of a few hundred years.

The ageless truth is you never know when a new girl will show up on the bus or a hot guy will crash the party. You never can predict how your life will change.

“The new girl took a deep breath and stepped farther down the aisle. Nobody would look at her. Park tried not to, but it was kind of a train wreck/eclipse situation.”

What did Romeo look like? “My lips, two blushing pilgrims, ready stand / To smooth that rough touch with a tender kiss.”

Compared to Romeo and Juliet, Eleanor and Park take it very slow. The book has the sexiest hand-holding I’ve ever read. Rowell delivers a read that stays with you forever.

But Shakespeare? I’ve been avoiding him since about 1986.

William Shakespeare is like Kendrick Lamar — both men are geniuses, and both intimidate me. I need context to understand them. In the case of Lamar, whose music I have heard from my kids’ phones since 2012, I needed the movie Black Panther, for which Lamar wrote the soundtrack. For me to get Shakespeare, I also needed context provided by Callie Feyen’s The Teacher Diaries: Romeo & Juliet. Neither of these stories — E&P and R&J — are only about young love. R&J is also about feuding families. E&P is also about abuse and prejudice, of many varieties.

I haven’t been a teenager for a while. One of my children has already left those years behind, and the other isn’t far from official adulthood. I thought I would be a better parent through these years Callie describes as “awkward, mysterious, horrifying, wonderful” — oh, wait, she was talking about Romeo & Juliet.

She writes about how the adults in R&J, the Nurse and the Friar (the parental figures) sometimes do the wrong thing with the right intentions. Callie also writes, “Nothing in this story is easy. Everyone is right. Everyone is wrong. We learn to walk through the story holding onto both of these truths.” The same could be said of E&P. So many adults fail these star-cross’d lovers.

Just in case you think Callie is stretching when comparing one youth story to another, Rowell makes it explicit, with a discussion of Romeo & Juliet, which Eleanor and Park’s English teacher, Mr. Stessman, calls not only a tragedy but “the tragedy.”

(Sidenote: I love Mr. Stessman. A lot of character development happens in his classroom scenes.) Mr. Stessman says to Eleanor, “It was love at first sight.”

It was ‘Oh my God, he’s so cute’ at first sight. If Shakespeare wanted you to believe they were in love, he wouldn’t tell you in almost the very first scene that Romeo was hung up on Rosaline…It’s Shakespeare making fun of love,” she said.

“Then why has it survived?”

“I don’t know, because Shakespeare is a really good writer?”

“No!” Mr. Stessman said. “Someone else, someone with a heart. Mr. Sheridan, what beats in your chest? Tell us, why has Romeo and Juliet survived four hundred years?”

Park hated talking in class. Eleanor frowned at him, then looked away. He felt himself blush. “Because…” he said quietly, looking at his desk, “because people want to remember what it’s like to be young? And in love?”

I wonder how long it’s been since my librarians have read Romeo & Juliet. Do they remember Sampson and Gregory’s lewd words in the very first scene? If they were read it now, would the book be banned? Would an inquisitive patron have to ask permission to read The Bard?

It’s no more worthy of pearl-clutching than Eleanor & Park. And although the two heroes don’t live happily ever after at least, unlike Romeo & Juliet they do live.

Photo by Abby Gillardi, Creative Commons via Flickr. Post by Megan Willome, author of The Joy of Poetry.