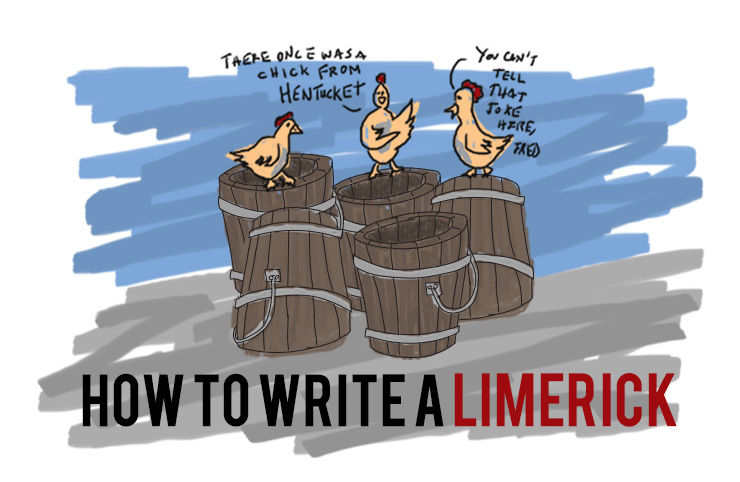 10 of the Best Limericks

I once put some chickens on buckets
To rhyme in a verse on Nantucket
The chickens were jokers
Who’d make fine stockbrokers
But they needed to be more like puppets.

The limerick is a fun little poetry form. It’s often used for bawdy rhymes, though its origins were more for the pre-school set.

When we ran a monthly poetry prompt series on the limerick, we were treated to an abundance of the five-line ditties, and we’re still laughing about some of them.

Here, in no particular order, are our favorite 10 limericks from the Tweetspeak community:

There once was a mighty big snake
Stretched out on the concrete to bake.
A cake for a gator?
He shrieked, “See ya later!
That’s one meal I don’t want to make!”

A deadline in April: taxation.
No time for fun or relaxation.
I write limericks, I slumber,
put off crunching numbers—
an expert at procrastination.

There was an iguana named Bert
So fleek in a green muscle shirt.
With a whip of his tail
This magnificent male
Excited a ‘guana named Gert.

There once was a cousin from Lima
who drew up a getaway schema.
With her bag packed,
through the hedgerow she hacked
to sneak off and live with her Memaw.

The crane gave a hoot and just fled;
Bao Bao to China was sped.
While the red fox escaped,
our gorillas just gaped,
and Redd in his bed played dead.

Sister Mary the New York nun
Came to visit one time just for fun
Mom discovered too late
She’d made a mistake
And sauced my great aunt with some rum.

Two sisters went by middle names,
both their first names being the same.
The one was Maria,
the other … Maria.
The dad claimed the mom was to blame.

There was an iguana named Izzy
Who peeked through the window to see me.
He was looking forlorn
So I offered popcorn
But that threw him into a tizzy.

Plus a bonus limerick, from Santa to Heather

Heather, you’ve been quite a pain
Writing letters again and again.
You think it is cool
To break every rule.
No. You can’t have that castle in Spain.