Last month a colleague and I had a series of phone conferences with a client as we developed a new training course for them. We hadn’t met yet in person, hadn’t seen any smirks or frowns or winks or hand gestures to give us any cues as to how they were responding to our ideas and questions. So the first two calls were serious business. Very serious. Serious to the point of holding my head in my hands.

Finally, during the third call, in a move we could later decide was either brilliant or foolhardy, I made a joke. It had something to do with drawing lots to see which student would spend the afternoon locked up in our—oh, goodness. Never mind what the joke was. Just know it had all the potential in the world to go terribly bad.

There was a pause. The pregnant sort, you could say. And then, I believe, a bit of a muffled snort which seemed to give everyone else permission to laugh. From then on, the calls were not so serious. The discussions were not so tedious. We got done what we needed to, and it seemed that the trepidation that had marked our conversations up until then mostly went away.

Just because we laughed together for a while. (And it’s okay, no students were locked away during the training.)

What happened during that episode? In  Born to Be Good, Dacher Keltner highlights research around laughter that suggests that “it is almost always social, it collapses the body into a state of relaxation, it is intertwined with breathing.” It is true that at times during those calls I probably stopped breathing. Or at least stopped breathing normally. I or my colleague would speak, and I would hold my breath waiting for a response. Laughter, Keltner says in summarizing research by Robert Provine, is the “primordial breathing technique, the first ‘take a deep breath’ exhalation. When chimps and bonobos show the open-mouth play face, they are altering their fight/flight physiology to reduce the chances of aggression and opening up opportunities for play and affiliation.”

Laughter brings us together.

Jo-Anne Bachorowski and her colleague Michael Owren conducted research on the acoustic qualities and nature of laughter, making observations about laughter’s social functions. One important conclusion: “Laughter builds cooperative bonds vital to group living.” They note that laughter’s cooperative function arises from contagion—one good laugh deserves another. Brain research is telling us that “when we hear others laugh, mirror neurons represent that expressive behavior and quickly activate action tendencies and experiences that simulate the original laugh in the listener’s brain.” What that means is that even if we don’t laugh when we hear someone else laughing, we experience neural activity as though we were laughing ourselves. But the second part of that cooperative function is that laughter is rewarding. “Laughter rewards mutually beneficial exchanges—successful collaborations at work, in the kitchen, in child rearing, with friends,” explains Keltner. “Laughter signals appreciation and shared understanding. Laughter evokes pleasure. Given that each individual has a signature laugh, produced by the particulars of the vocal apparatus, laughs become unique rewards of cooperative exchange, building trust between individuals.”

Laughter aids not only in collaboration and cooperation, but also functions as a salve for grief. Keltner considered the research of George Bonanno who studied responses to grief over a period of 15 years. The “conventional view,” as Keltner notes, is hard to dispute: “after a trauma, everyone suffers prolonged periods of maladjustment, anxiety, distress, and depression.” But Bonanno’s research found that a significant number of people, within the year, are “as happy as they were, more poignant perhaps, filled with bursts of breathless longing, but in the end, content with life, and perhaps a bit wiser.”

How did they get there? Keltner argues that they laughed their way there. “Laughter provides a brief vacation,” he says (remember that breathing technique).” Together with Bonanno, he studied individuals who had recently lost a spouse, asking whether laughter might help them “find new layers of meaning in the midst of trauma, and perhaps a path to the meaningful life?” The conventional wisdom says that during periods of grief, expression of negative emotions is expected as a necessary means of recovery and that expression of positive emotions “is in actuality a pathological sign of denial.” On the contrary, what Keltner and Bonanno found was that laughter was an opening to a new way of being. Their subjects who laughed, far from engaging in denial about their loss, actually were the most likely to talk about their grief. But for them, laughter became a “portal into a new understanding of their lives. A laugh is a lightning bolt of wisdom, a moment in which the individual steps back and gains a broader perspective upon their lives and the human condition.”

Laughter is good medicine. Like my doctor always says, tell two jokes and call me in the morning.

We’ve been discussing Born To Be Good: The Science of a Meaningful Life in our book club this month. Are you reading along? Share your thoughts in the comments as we wrap up our discussion of this fascinating book. 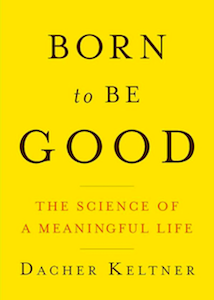