Even though we’ve been celebrating Poetry at Work Day for five years now, each year is a bit of a surprise. Will we be met with clever poets reminding us all that they are at work every day? (That’s the point, actually, for both poets and the not-so-poetic, that there’s poetry in the workplace every day, not just the special ones where we pay extra attention.) Will we see dozens of would-be haiku lines that take that sudden turn at the end toward “Coffee”? Or will we see, as we do every year, hundreds of different manifestations of people finding a way to lift the poetic in their work, or to bring an extra measure of poetry to the day.

The biggest surprise this year, at least for me, was seeing Poetry at Work Day in the chyron of a local news station. (That’s the digital headline you see at the bottom of your screen.)

Courtesy Desk, now on WGN TV with @PaulKonrad. It's National Poetry at Work Day, see what Paul has in store… #real pic.twitter.com/oHbprWqrHL

Paul Conrad of WGN morning news had a poem for his colleagues and viewers.

And not to be done by a newsroom in another market, the floor director of Fox 17 in Michigan read his poem in front of a roaring fire. (Things that you can do when you have a whole newsroom at your disposal.)

Another favorite of mine, which has nothing to do with the news, was the delicious haiku written by the folks at Frango. (Frango means chocolate in many languages.)

The theatre contingent was big this year:

Here's a little poetic inspiration from our workplace to yours. pic.twitter.com/37EakAybUO

"In darkness, smoke comes out of a stack. The sound of auto plant machinery hums and rattles. Hip hop drum beats [J Dilla-inspired] blend into the rhythm – a cacophony of working class hustle."#PoetryAtWorkDay #SkeletonCrew #DominiqueMorisseau #OpeningLines

Libraries, as usual, led the way:

Page by page and stair by stair,
Find a book and a comfy chair.
Get lost in a story or nine,
Or in Cravens' stairwell design.#PoetryAtWorkDay pic.twitter.com/tD8Vvx9rQP

Today is #PoetryatWorkDay! If you're a state employee, let us deliver some beautiful poetry directly to your desk. Just click on "Place Hold" next to each book to get started! https://t.co/WwEV6qobLh pic.twitter.com/eNJ8ikjXuW

Roses are Red
Violets are Blue
It's #PoetryAtWorkDay
Just trust us
It's true: https://t.co/jWilL9Qs3W pic.twitter.com/syAnY0pVgF

It's #PoetryAtWorkDay! We decided to go with a book spine #haiku.

Waiting for winter.
The most noble adventure
In the falling snow. #UAlbanyLibs #Poetry pic.twitter.com/UQ2XFYAFIs

Look what Scholastic was doing:

In celebration of Poetry at Work Day, the Scholastic Awards team shared their favorite poems on the @Scholastic blog. What's your favorite poem? https://t.co/kn8pXHBwWO pic.twitter.com/TyvOXw4VN3

And there was some participation from both sides of the aisle:

A MAP haiku to celebrate #PoetryAtWorkDay:
Working together
To bridge partisan divides
Across the nation

At Veterans United, we're here for you,
Our team will help make your dream come true.
So give us a call or check us out online…
Hey wait, is that a link? I'll take that as a sign!https://t.co/sE5KXeMQhV#PoetryAtWorkDay

Poetry and coffee and cafeterias, oh my:

Left some poems at my local coffee shop. I went there to work so logically I had to leave poems for folks to celebrate #PoetryatWorkDay #morepoetrylessstress for all! pic.twitter.com/zl8kEymsbk

The overseer of meats
at Mehlman's Cafeteria

would plate a slice of meatloaf
when he saw my brother in line.

The Mary Rose was hard at work throughout the day crafting poems about the ship’s very wet (and now dry) fate.

She sank in the Solent, it’s true,
But she was raised in October ’82.
The Mary Rose is much better,
Now she’s not wetter,
So bring the family to Portsmouth to view!#PoetryatWorkDay #poetryatwork pic.twitter.com/IfzcpghWSn

If the weather makes you feel blue,
And you're looking for something to do,
Why not visit a museum for an hour, or two?#PoetryatWorkDay #poetryatwork pic.twitter.com/41JtWA1B0K

While some like to think of Poetry at Work Day as a national celebration, the day is routinely celebrated all over the world. This year we saw participation from all kinds of places:

As Oscar Wilde once said: ‘We are all in the gutter, but some of us are looking at the stars.’ Let your mind rummage through the minds of our wordsmiths today! It’s #PoetryAtWorkDay after all! pic.twitter.com/tUY9CxY7hw

Our wonderful neighbors in Canada came along:

Roses are red,
Violets are blue,
I turn on my headlights,
And you should too!#PoetryAtWorkDay #SeeAndBeSeen pic.twitter.com/BavbQpBnzL

No better time will there ever be/
to choose your passwords carefully.
Use a combo of numbers, symbols and letters/
And choose something you won't forgetters (…we did our best) #PoetryatWorkDay

"Why should I Iet the toad work squat on my life?" A bit of #PhilipLarkin for #PoetryAtWorkDay. #Poetry #poets #work #Tuesday. pic.twitter.com/RKLhy6ClLi

Poems remind us to be healthy:

We had a wonderful reminder of the power of poetry in dealing with dementia:

This #PoetryatWorkDay read about our supporter, Tom, who recorded Shakespeare's 154 sonnets to help us provide specialist dementia nurses for families who urgently need them https://t.co/jjevtOXHBA #CharityTuesday

Did you know that today is #PoetryAtWorkDay?

"Don't feel so glum, plum. Don't feel beaten. You were made to be eaten."#Poem #Poetry #DayOfTheYear pic.twitter.com/Pu8T6TKWH5

And it doesn’t take a fan of T.S. Eliot to know that cats will always have a place in poetry:

Surrounded by books
Brimming with cats
I search out the details
and wear many hats. pic.twitter.com/QgdcxQtJnP

Though if cats aren’t your thing, maybe you like cows:

All around the barnyard, the animals are fast asleep,
Sleeping cows and horses, sleeping pigs and sheep.

As always, thanks for celebrating with us. You, and poetry at work, will help make the world a better place. 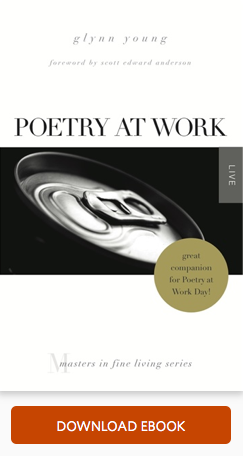