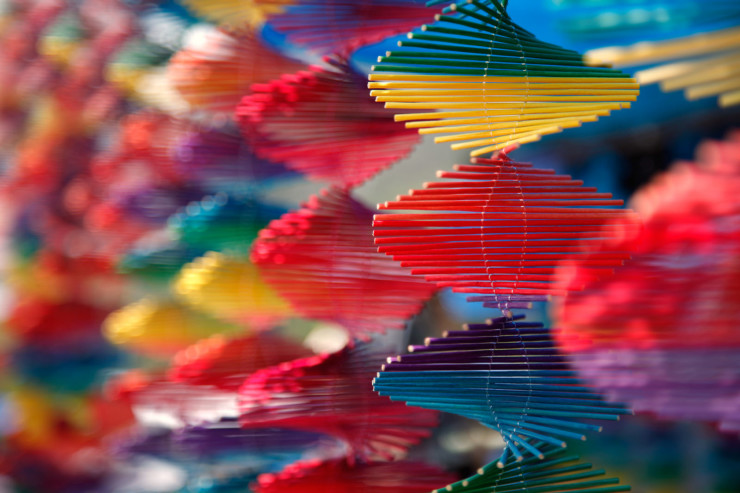 Editor’s Note: This the final post in a three-part book club discussion of Helen Czerski’s Storm in a Teacup: The Physics of Everyday Life.

It’s a wall, and tea can’t pass through it.

—Helen Czerski, Storm in a Teacup

I, for one, don’t find straight lines to be the worst thing. I’m pretty sure, in fact, that I’ve not ever been made dizzy while walking in a straight line. Put me on a merry-go-round, turning in circles for no good reason, and we’ll have a different outcome.

When we were at Disney’s Epcot several years ago, we went on the Mission: SPACE ride. Knowing the ride fiddled around with G-force simulations, we signed on for the Green mission. All in all, it was pretty harmless. We came out walking upright and feeling not at all like we’d just been in outer space. So then, about that Orange mission. How much worse could it be? I let my kids talk me into the advanced mission. I flinched a little at the warning signs that suggested that if you had high blood pressure, or were pregnant, or had back problems, or ate anything spicy for breakfast, you might like to skip the ride. But really. The Green mission was so relaxed. It’s all Disney smoke and mirrors anyway. We stayed in the line and persuaded ourselves that the little bags in the seats once we got to the ride didn’t mean a thing. Just because they have them in the seat pockets of an airplane doesn’t mean that everybody on the flight uses them. Right?

Riding Mission: SPACE Orange is just like watching a video shot from your own vantage point while strapped into a hard plastic chair. You launch into space, you dodge a few asteroids, you come in for a difficult landing on Mars only to have the edge of the cliff you just came to rest on fall away beneath you. It’s just video. No big deal.

But the contraption you’re sitting in, in ways that you cannot actually see at the time, is spinning at such a ridiculous rate of speed that your eyes water. (And the tears track  horizontally over to your ears, instead of running down your cheeks.) Your cheeks fill with air in that weird way they do when you drive down the highway with your head out the window. (You don’t do that? Okay then, the way your dog’s cheeks fill with air.) No one I saw coming off this ride was the same person who boarded it. Even the college guys ahead of us in line joking and jostling each other before the ride were a certain shade of green afterward, no longer jostling each other for fun but out of an inability walk straight.

Yes. Disney has a way of turning a campy little video into a horror show of physical sensations no responsible person invites upon themselves just for entertainment.

“The one thing you can’t do when you’re spinning is travel in a straight line,” says Helen Czerski in Storm in a Teacup. I can assure you, there are other things one cannot do while spinning. (Including reaching for that bag I mentioned, so you may consider having it in your hand before lift off.) But clearly, moving in a straight line is one. A thing that fascinates is that the spinning itself, sometimes, comes as a result of such an attempt, anyway.

Czerski observes that when we stir tea, a hole forms in the middle of the cup:

When I start to stir my tea, I’m pushing on the liquid with the spoon. I push it forward, but there’s only so far that it can go before it meets the side of the mug. If I did the same thing with a spoon in a swimming pool, the water in front of the spoon would move forward, and it would keep going forward until it mixed with the rest of the pool. But in the mug, there’s no room for that to happen. Even though the side of the mug isn’t going anywhere, it can still push back on any liquid that bumps up against it. It’s a wall, and tea can’t pass through it . Since the tea can’t go in a straight line, it starts to move around the  cup in a circle. But as that’s going on it’s piling up against the walls because only the side of the mug can push back. The tea will keep trying to go in a straight line, and it only moves around in a circle because it’s being forced to curve.

This is the first lesson about spinning things.

I realize Czerski is the physicist here. But it seems this is not the first lesson about spinning things. The first lesson, to my mind, is Don’t. (But perhaps she has not ridden on the Orange mission.) Even so, there may be a lesson, if one wanted to extrapolate one, about the resilience of tea and its willingness to continue turning, instead of wringing its hands and collapsing in the face of the wall.

After all, says the physicist about spinning, “The worst that can happen is that you end up back where you started.”

While we’re all busy spinning around, it might be a good time to practice writing a villanelle, a poem form that uses repetition in such a way that it can feel like it circles back around itself. If you’re unfamiliar with the process, check out this post by David Wheeler which shows you step by step how to write a villanelle at the end. Show us yours in the comments!

Catch up on our Storm in a Teacup readings: