Any geologist will tell you this place is a smoking gun. Beauty and mystery lock horns with menace and might.

All persons traveling through the park from October 1 to June 1 should be regarded with suspicion. So reads a 1907 guidebook. My husband and I regard each other with narrowed eyes. Then laugh. He’s here to complete his “Certified Interpretive Guide Training.” I’m here to chronicle Wonderland, already feeling dwarfed by surroundings, wide-eyed as Alice.

To walk here is to absorb wonder even as you sense simmering violence underfoot. Like plumbing, myriad fractures and fissures beneath the surface gurgle and pour, sometimes reroute themselves overnight.

Rock forms before your eyes. 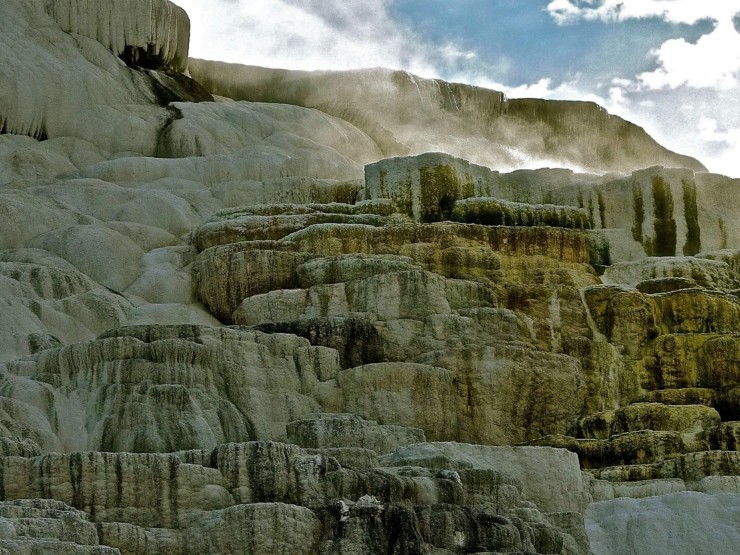 Geologists usually locate magma chambers 40 miles underground. Here molten rock seethes and churns just 2 miles below, relentlessly pushing upward. Central Yellowstone is rising about an inch per year. Were I to stand here until 2050, I’d be buried to my waist.

Jules Verne’s manic Professor Lidenbrock and his makeshift raft come to mind, forced up the fiery volcanic chimney on the crest of a raging, subterranean sea.

Perhaps we people ourselves with characters from books we love, ferry them with us into new settings: Voila!—surprise entrances from the wings of our minds where stories linger.

Established in 1872, Yellowstone now draws more than 3 million global visitors each year, eager to witness the geysers. The word derives from the Icelandic verb, gjosa, meaning “to gush.”

Picture a football field, upended. That’s how high water heaves at unpredictable Steamboat Geyser, largest in the world. With a million gallons of spray airborne, who could remain blasé?

Old Faithful spews enough water to sustain a typical American (100 gallons per day) for an entire summer—every time it erupts.

Venerable Castle Geyser launched its waterworks eons before pyramids shouldered above the desert.

No wonder the original Shoshone name for Yellowstone means “water keeps coming out.” Travel every road and you’ll catch the major features and still see only 2% of the park. Golden “gear jammer” buses await you, complete with guides. Or see the backcountry on foot, horseback, skis, or snow mobile. Rent a bike or canoe, or book Yellowstone’s xanthic stagecoach, bright as an egg yolk.

Most visitors arrive July through August. October means fewer crowds, some snow likely. But who minds sleeping in stocking cap plus hoodie when cobalt skies overarch sagebrush old as our nation? Aspens pay off their summer rent, freely spend their gold.

Our best advice? Drive the sinuous Grand Loop by car, in autumn, heading back down to Gardiner at sunset. Roadway unfurls like petrified spaghetti, touches off frissons along the spine thrilling both psyche and senses. Between foothills and mountains light cross-fades; valleys glow, then plunge into shadow; sunrays spotlight obsidian cliffs, a river, an evergreen grove. For two hours sky colors flare and bleed: gold to melon to rose, lavender, violet, slate-blue to battleship gray pricked by early stars.

According to estimates one-third of Americans will visit Yellowstone National Park.
Will you be one of them?

I’ve yet to mention Specimen Ridge, home to the world’s largest concentration of petrified trees, and The Grand Canyon of Yellowstone—deep enough to hold 5 stacked Statues of Liberty. Stay on this fire-mountain and spend the night among the stars. Watch their glorious bloom until the dawn, and get one more baptism of light. Then, with a fresh heart, go down to your work, and whatever your fate, under whatever ignorance or knowledge you may afterward chance to suffer, you will remember these fine, wild views, and look back with joy to your wanderings in the blessed old Yellowstone Wonderland.
—John Muir, 1898

A passel of presidents: Chester Arthur reeled in 103 pounds of trout, and Harding hand-fed the bears (note: major no-no). Gerald Ford served as a seasonal park employee in 1936. Kennedy visited two months before he died. Jimmy Carter came, as did the Clinton family.

Take this quiz about Yellowstone before October 29, 2017, and $1.00 will be donated to help Yellowstone Forever preserve this wonderland for generations to come.

Featured image by Maureen, Creative Commons license via Flickr. Post by Laurie Klein, author of the poetry collection of  Where the Sky Opens. Post photography by Laurie Klein. Used with permission.