Sometimes, poetry has a strong sense of place.

Sometimes, poetry is a place.

That poetry can be a place is a thing known intimately by the 90-and-change good folks who live near the intersection of Farm Roads 986 and 1565 in Kaufman County, in the little unincorporated town of Poetry, Texas. We made the discovery when Rick Maxson, the poet-editor behind our Every Day Poems publication, shared in a virtual editorial team meeting recently that he had, on behalf of Every Day Poems and Tweetspeak Poetry, adopted Poetry, Texas. 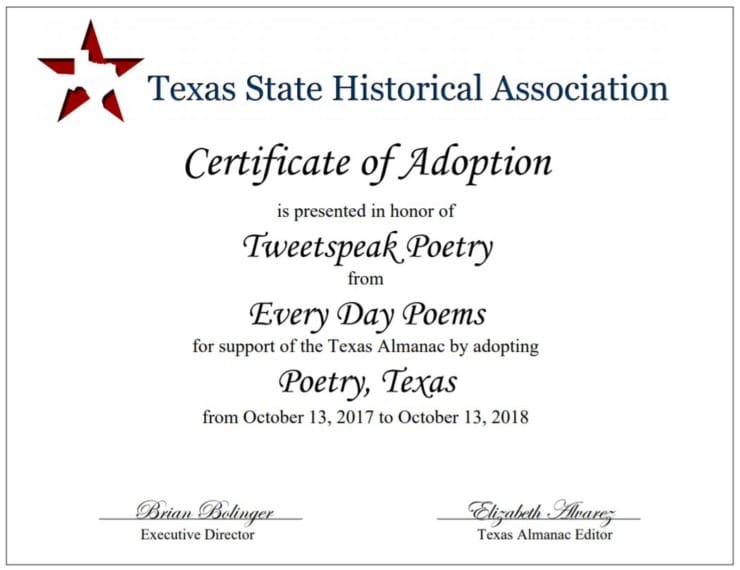 A few years ago, Falling Tree Productions spent some time in Poetry reporting for a podcast on BBC. The account is poetic in its own way, sharing interviews with the locals about the town’s history and ongoing struggle to keep the small community viable.

Like a lot of poetry, the town of Poetry started out as something else. The Texas Almanac (where you can adopt your own town for just $25) recalls that the town was first named by Elisha Turner after being awarded “a patent to a league and a labor of land” by Anson Jones, who was the last president of the Republic of Texas, back when that was a thing. Apparently along with patents and leagues and labors of land, a guy like Turner also got naming rights. There was some confusion at the post office, and in 1876 the postal service asked that the town of Turner’s Point be renamed to something less like another town. Good poetry has its own unique voice, so it’s fitting, really, that a local merchant named Maston Ussery suggested the name Poetry, “because the area in springtime reminded him of a poem.” The Almanac doesn’t say if he meant the idea of a poem or a real poem, and if so, what poem that might have been.

A lot has happened since 1876. We’ve put people in space and created telescopes big enough and powerful enough to see the whole galaxy. I imagine Maston Ussery might find that reminds him a little bit of a poem, too. And maybe he’d want to name a star after that poem, and after his place in Poetry, Texas.

He’s not here to do it, but Tweetspeak has always wanted to put poetry into space. On the moon, precisely, but with the NASA priorities as they stand right now we’re happy to work with the stars in the meantime. After Rick (our Every Day Poems editor) adopted a little town in Texas named Poetry, Tweetspeak took the liberty (or, poetic license as it were) of naming a star in a far off constellation for Poetry. You can even see it here, twinkling bright in the sky. Like our little town, Poetry the star came with its own adoption certificate. If you visit the profile online, you’ll find a poem written for the occasion.

Poetry
probably began
in the stars.

Though some would
say it began
in the moon.

Just look to the sky
and open your hand. It is believed that we are all made, at least in part, from stars. Joni Mitchell sang at Woodstock that “we are stardust.” Carl Sagan said that “The very matter that makes us up was generated long ago, far away, in red giant stars.” Even Walt Whitman wrote that “A blade of grass is the journeywork of the stars.”

Astrophysicist Karel Schrijver has said that “most of the material that we’re made of comes out of dying stars, or stars that died in explosions. And those stellar explosions continue. We have stuff in us as old as the universe, and then some stuff that landed here maybe only a hundred years ago. And all of that mixes in our bodies.”

So if we’re made up of the stuff of stars, and stars are made up at least a little bit out of poetry, maybe it’s also true that we are also made up, at least a little, of poems. If that’s true, there’s plenty of space in … space … for more poetry. Not long after our star appeared in the Centaurus constellation, someone else adopted a star in the neighborhood (the star-naming people let you be neighborly like that) and named it Neruda. And then, soon enough, along came Emily. And then Sonnet.

We can’t all make the trip to Poetry, Texas. (Though I think Rick may have.) But we can meet in the stars. Join us in naming more of Poetry’s celestial neighbors (you can do it for free). Just visit our star’s page and choose “Name a Star Nearby.” We’d love to hear from you if you name a star. Tell us what name you chose in the comments, and if you write a poem for your star, all the better (but certainly not required).

We’ll be looking for you in the night sky.