Then came a sound as of surf upon stone–
On wings of the wind came its ominous tone
‘Ere a living red wall, a flaming line,
Galloped down swiftly upon the tall pine . . .

Destruction and death were wedded that day
Of that awful year that’s so far away.

—from “Holocaust” by George Angus Belding
(as quoted in Michigan on Fire by Betty Sodders, page 311)

My grandmother once rode a train through the middle of a forest fire. I heard the story second-hand from my dad. The family settled in Alpena, he told me, and never returned home to Tower, Michigan. Grandma was four years old. She was born in 1904.

Tower is about 15 miles west of Millersburg, 30 miles west of Metz, 60 miles northwest of Alpena, which overlooks Lake Huron’s Thunder Bay. A branch of the Detroit & Mackinaw railroad once connected these towns. On October 15, 1908, a fire started somewhere west of Millersburg and raged over northeastern Lower Michigan, burning all the way to Lake Huron. The fire ultimately destroyed 2.5 million acres and incinerated the village of Metz. One of the most heartbreaking stories is of the D & M relief train that slipped off heat-warped tracks just outside of town at Nowicki’s Siding. The train might have made it to safety if it hadn’t been delayed by people loading household goods and a local saloon owner loading his liquor. When the train left the track, some leaped off. Adults threw children over the sides. People ran. Some died. Some survived, but with terrible burns. Three mothers and nine children huddled in a steel gondola car and perished.

“Thinking that my wife and children would get safely away, I waited to see if nothing could be done to save the depot . . .The fire was then consuming dwellings on the outskirts of the village, and soon after the train had gone, I realized my task was hopeless . . .” George Cicero, the railway assistant agent in Metz, sent his last message: “I can send no more. This building is all afire.” He ran through the woods to the next town. His wife and three children were in the gondola.

Is it possible this was the fire my grandmother and family fled, on an earlier train? These thoughts and other questions set me to researching the event a few years back. Some of the accounts gave me nightmares. I dared to start a novel but didn’t dare myself to continue writing. I tucked the first pages away in a box.

When we were back in Michigan this past summer, a visit to Ocqueoc Falls took my husband and me through the town of Tower. We stopped for lunch in Onaway at the Wood Winds Restaurant and Pizzeria, which opened in 1958 as the first A&W® drive-in in northern Michigan. It’s the place with the life-size black bear in front and the elk antler door handle. One of the placemat’s many advertisements was for a business in nearby Millersburg, and I realized where we were. After soup and salad and splitting a slice of homemade chocolate pie, I begged to take a short side trip. 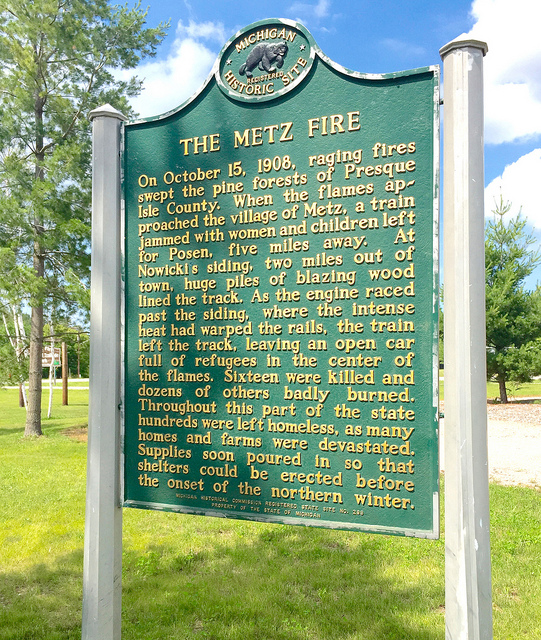 The fire started west of Millersburg. It could have been started by clearing land or burning slash or even due to sparks from a passing train. At any rate, it had been extremely dry after a wet spring that let the forest undergrowth flourish. Several killing frosts transformed it into a “powdery kindle.” (Sodder, p. 259)

We turned off 68 onto Millersburg Road, and I imagined the inferno, saw flames billow across the land, heard their roar, and felt their heat. I imagined people running, ashes in their hair, maybe with clothes aflame. Was that pond there then? Did someone find safety in the middle of that body of water? Perhaps share it with their livestock and frightened wildlife? “When the Village of Metz vanished into oblivion, all that remained were ashes, charred ruins and smoking rubble. The only building still standing was St. Dominic’s Catholic church, which actually was positioned just out of town to the southwest.” A house across the road from that church also survived, perhaps because bare ground left from harvested potatoes provided a safe barrier. (Sodder, p. 284)

As we approached the village, what there is of it, we passed the “new” St. Dominic’s on the left. The original church that survived the fire was moved some years back to serve as the church’s parish hall.

Just past the church sits the Metz Township Hall, and next to it is a small roadside park memorial with a playground and nature trail. Various markers describing the tragedy and its aftermath stand along a path. Weather-protected photos and articles line the interior walls of a pavilion. My husband and I spoke low, if at all, though nobody else was around—except for a few cars parked at the bar across Railroad Street. A couple of grills nestled next to the pavilion. I don’t think I could enjoy hot dogs at one of the picnic tables.

I sat in one of the swings and wondered if on this same spot a hundred-plus years ago, children may have shrieked not with laughter but with fear. I listened for the train whistle. I sensed an eerie aura when I looked up at the still-standing railroad track sign and then walked a ways down the rail-to-trail. I felt torn and disjointed between the now and the then on this beautiful sunny warm day.

A parishioner who was tending the church plantings at St. Dominic’s directed us to the old cemetery out of “town” about a mile where the original church used to stand. A home has since been built on that land, and we felt a bit like we were trespassing when we made our way out behind it to search out headstones that marked the resting places of fire victims. A couple of deer ran past.

The fire swallowed St. Peter’s Lutheran first. Three church members saved the organ, the Bible, and a crucifix and dumped them in a ditch. The crucifix and Bible remain in the church that was rebuilt on its original foundation. After we visited the old cemetery behind that church, I took note of all the bushes surrounding the building. They weren’t blooming, but I’m pretty sure they were lilacs. I remembered that Sodders wrote about how lilacs had been planted to mark the graves of victims of the Peshtigo Fire of 1871. (page 19-21) I thought about the hardiness of lilacs and of how fire increases the growth of wild ones, not only by scarifying the seed but also by opening the forest canopy to light. I wished these bushes were in bloom so I could take in the fragrance. 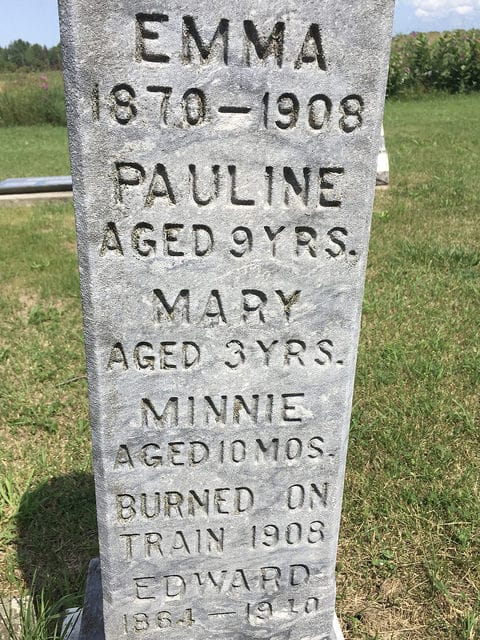 Said Pastor Ernest Thieme, “Sunday, I buried at one funeral, ten of the members of our church who died in the fire. It was a strange worship service, which I conducted with a loudly sobbing congregation alongside a church in ashes, conducted over open graves. I leaned against a lonely standing fence post, and wept, perhaps the first time since I was a child.”

The possibility that my grandmother may have experienced this fire connected me to the place and it seems to be part of my personal history, too. Perhaps it’s time to pull that novel out of the drawer.