“What if you just did it your own way? No rules, no right or wrong, just what you think is beautiful?”

I copied these words from Sandra Magsamenon onto poster board and underneath I wrote “Summer 2017” and hung the sign on a wall in our dining room. I put a pack of Post-its on the table, a few pens, and a note: “What do you want to do this summer? Write it down and stick it on the wall. Love, Mama.”

Hadley wants to eat dinner at our neighborhood pool and have a summer-long Yahtzee tournament. Harper wants to learn how to dive off the diving board and meet a fairy. (They live in Ann Arbor, you know.)

I want my girls to follow what they think is beautiful, so Yahtzee will be our summer centerpiece on the dining table, and I’ve found a book that tells me where all the fairy doors in Ann Arbor are located. We can see the diving boards from our kitchen window, and since the pool opened, we’ve been there every day. We walk out our back door, and the girls run ahead of me — past the two rocks they decorated where their fallen fish lay buried, past the cottonwood trees they played under in late winter and early spring — and as they run, their beach towels billow behind them and the cottonwood seeds flutter and dance so that what I see already feels nostalgic. I wonder if the thrill of this short walk to the pool will ever get old. It’s like walking in a poem. 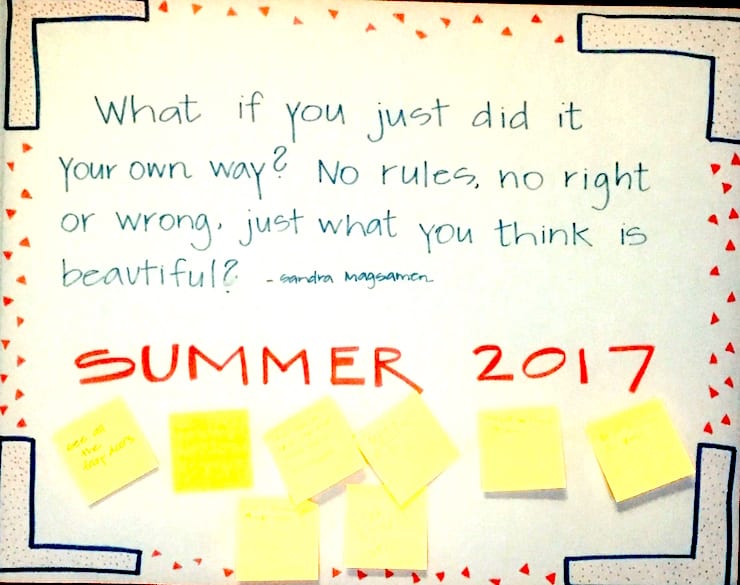 One of the items on the summer list is Harper’s hope to “read 100 books together before bed.” I’m all for reading, don’t get me wrong, and summertime reading is a must — like going to baseball games and wearing flip-flops or making your first pair of cut-off jeans. One hundred books before bed, though? That calls for some creativity.

“Harper,” I say one evening, putting a cap on a marker after completing a “100 BOOKS” sign, “we have to come up with a plan.”

I tape the sign to the back of the door in our study. The girls are sitting on a couch, their hair still wet from being in the pool less than half an hour ago. Their cheeks are red and freckled, and they smell like summer.

“Can picture books count?” I ask.

“OK, but only ones we haven’t read before,” says Hadley, always up for a challenge.

“Perfect,” I say and pull out two picture books from my bag next to my desk. I’ve been cataloguing books at work, and if I see a book or two I think the girls might like, I bring them home. I always bring them back. Promise.

I get out Amelia and Eleanor Go For A Ride by Pam Munoz Ryan and Dear Mr. Blueberry by Simon James to the couch. The first one is a creative nonfiction story about a night Amelia Earhart and Eleanor Roosevelt skipped out early on a dinner at the White House and took a flight along the Potomac, to Baltimore and back. They had so much fun, they decided the only thing that could match the experience would be for the first lady to drive her car as fast as she could around Georgetown, so they ditched the Secret Service and did just that. Here’s a story about two ladies who were told flying and driving were tasks too complicated for females to handle. They didn’t concern themselves with what others said about what they could and couldn’t (or should and shouldn’t) do. They did it their way. They took a look at their white satin dinner gloves and decided these would be perfect for a night flight and a drive around the nation’s capital.

Dear Mr. Blueberry is a series of letters between a little girl named Emily and her teacher, Mr. Blueberry. Emily writes to him because there is a whale swimming in her pond, and she wants to know what kinds of food he eats.

Mr. Blueberry insists there can’t possibly be a whale in Emily’s pond. For one thing, whales swim in salt water, but Emily pays him no mind and pours salt into the water for the whale, who she’s now named Arthur, and who lets her stroke his head. It’s a delightful story about a little girl who attends to her beautiful dream despite her teacher’s insistence that a whale would never find its way to a backyard pond. I think Hadley and Harper could imagine a whale swimming in their backyard just as easily as they could picture two friends traipsing around Washington, D.C. in dinner party attire.

After we read the stories, I write down the titles on pieces of paper, along with the date, and tape them to the study door.

“We could read at lunchtime,” Harper suggests, “since we’re home together now. It doesn’t have to be only at bedtime.”

“Good idea,” I say, picking up Louis Sachar’s There’s a Boy in the Girls’ Bathroom. We’re currently in the middle of the book, when Bradley Chalkers is beginning to believe that he’s not a monster, even though everyone — students and teachers — says he is. He wants desperately to believe what the school counselor, Carla Davis, has told him: There’s no such thing as monsters, and everyone has good in them. I remember an English teacher of mine who once said that anything coming back to life hurts, and I see that truth in Bradley’s story. He is painfully learning to do things his own way, digging up beauty inside himself, and trying his best to follow it. I ache for him and root for him at the same time, hoping his imagination will bring his longing to life.

Our summer reading plan will consist of attempting to read one hundred books, but we will search for and follow beauty too.

I’ve been tinkering around with a reading log so we can capture some of the beauty we find. I think writing down the title of a book, the date we read it, and one sentence we find lovely would be a nice practice. The other day, though, as I was organizing books in the library, I found one by Monalisa DeGross called Donovan’s Word Jar. It’s a story about a boy who collects words. He puts them in a jar, but the jar fills up, and he doesn’t know what to do next. Skimming through the book, I thought collecting words would be a fun activity to add to our summer reading challenge. I have several glass jars and jugs I’ve been collecting since January, and slipping a word in one of them as we go through our days sounds delightful. Then every so often we can pick a word out of the jar and use it.

Harper taught me how to do something she termed “triangle spelling.” You draw a great, big triangle on a piece of paper and then spill the letters of the word into it. Harper likes to write her name and then add Zentangle designs in the spaces, but I thought we could write the word’s definition, add a matching doodle, and then maybe some synonyms and antonyms. We could make an artistic word wall. I tell Harper my idea on the way home from school one day.

“There’s a story about that same thing, except it’s with colors,” she tells me.

“Yeah. A little girl tries to catch colors and put them in a jar.”

I wonder out loud about catching colors. Does the girl carry around colored pencils and paper? Does she match the color to what she sees, or does she pick a blade of grass for green and plunk it into the jar?

“I don’t know because I was in art class when the teacher was reading the story to a kindergarten class outside in the hallway. We had a sub because our art teacher locked herself out of the house,” Harper says.

We drive for a while in silence, and then she says, “I remember yellow was the most difficult to catch.”

“You don’t say,” I respond. Yellow is my favorite color.

I’ve always believed that I’m attracted to yellow because it’s beautiful, but I wonder now if it’s because yellow is wild. Maybe its wildness makes it beautiful.

You can’t really capture something wild, though. Or you shouldn’t. It shouldn’t be stuffed into a jar. Maybe it’s waiting for you to chase it, past the cottonwood trees, into the pool. Maybe it whispers hello while you’re wondering about whales in ponds and little boys doing their best to bring the good out of themselves and white-gloved ladies flying over Washington, D.C.

Here’s to a wild summer, splashed with a hundred yellow stars.