After I took that spill on a hill at dusk into a pile of Mackinac Island horse manure some years back, I was afraid to climb back on my bike. But when we moved into this neighborhood carved from the Everglades, I agreed to join my husband on various wild adventures, some of which involved bikes. So early one Sunday evening we pedaled (I mostly wobbled) the three miles or so to Burt Aaronson South County Regional Park. It meant crossing a four-lane highway, and even though there was minimal traffic, the pavement looked mighty hard.

When we got to the entrance near the Osprey Point Golf Course, we had to dodge a stream of cars coming from the opposite direction and heading into the park. We figured out they were on their way to a “Chinese Lantern Festival” at the Sunset Cove Amphitheater. It had already been going for a month, with two weeks yet to go. How could so many people be so interested in Chinese lanterns? This, however, was not the night to go exploring. I needed to leave the premises before I tumbled into a car or one ran into me. Plus we didn’t have lights on our bikes, and the sun was going down.

Once safe at home, I did a web search. These weren’t just those sky lanterns we saw floating over the lake prior to a Fourth of July fireworks show. Nor were they a display of tree-swaying, paper-covered lamps. I discovered Chinese lanterns are a really big deal, and I was thrilled to have found somewhere to take my niece and great-nephew when they came from Michigan the following week. The festival, the first in our area, was sponsored by Hanart Culture, which takes its name from “han,” the largest nationality in China, and refers back to the Han Dynasty, considered a golden age in Chinese history. The second part “art,” refers to all kinds of art styles, including kung fu, martial arts, and acrobatics. The company’s purpose is to bring Chinese art and culture to the world.

Our first stop on the night we visited was the dinosaur empire where life-sized replicas moved and roared. My great-nephew was able to ride one like a box store pony. I wondered what dinosaurs had to do with this event and later discovered that the Chinese Lantern Festival originated in the city of Zigong, also known as the “Lantern Town in the South Kingdom.” A “dinosaur quarry” was discovered there in the 1980s, and in 1987 the Zigong Dinosaur Museum, the first specialized dinosaur museum in Asia, opened. We enjoyed a spectacular martial arts and kung fu performance. Afterwards, the great-nephew participated in a short group lesson on stage. We visited the craft tent where we saw art demonstrations of techniques such as straw weaving, paper cutting, dough modeling, sugar drawing, and Chinese knotting. A clay sculptor molded the faces and torsos of a couple posing for him, dressing the sculptures similar to his subjects.

When the sun set, the main art indeed became magic. The theme of the festival was “The Wild,” and Zigong artisans had spent nearly 30,000 hours assembling 800 colorful lanterns depicting animals from every continent. A herd of alligators and a flock of flamingos greeted us on the hill by the lake. We might have expected them, but as we walked on, it seemed like the world came together on that 15 acres, a sense accentuated by the various languages we heard spoken around us as a result of living in a multicultural area of South Florida.

The artisans used rayon, satin, ceramic, steel wires, and porcelain to construct the lanterns. They used thousands of low-watt LED bulbs to illuminate them, and several displays were even animated. Others, like a reef replica and a herd of hippos, were set directly in the lake. Tigers roared, and birds chittered. My father-in-law raised peafowl, so I especially appreciated the strutting peacock, its bright colors the result of small medicine bottles filled with colored pigment. 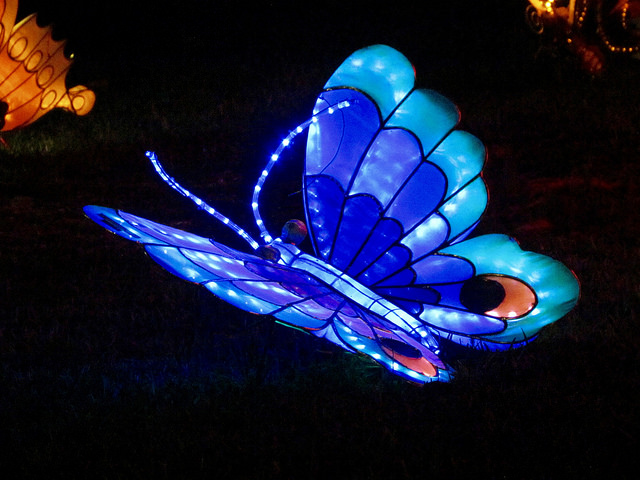 A yellowish-and-brownish-striped grasshopper gazed at me with its big black, green-ringed compound eyes. Or maybe it was a dragonfly. Or maybe it was a new creation. At any rate, fragments of Mary Oliver’s poem “A Summer Day” began to wisp around my head.

— Mary Oliver (read the rest of the poem)

Tell me, what is it you plan to do
with your one wild and precious life?