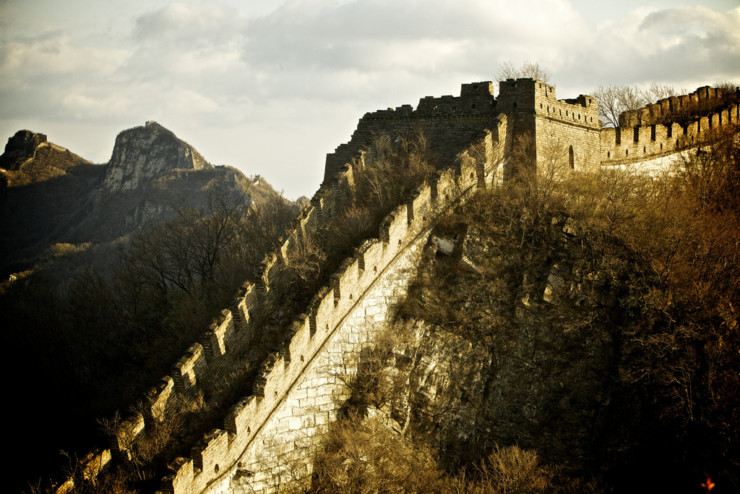 Of his poem “Mending Wall,” Robert Frost acknowledged, “People are frequently misunderstanding it or misinterpreting it.”

There is at once a contrast of two very different people on the same task to repair the stone barrier between their farms. In the first line, the poet-narrator communicates famously his hesitation of the job ahead:

Something there is that doesn’t love a wall.”

As the poem moves quickly into metaphor, this line is repeated and the mischievous narrator suggests that perhaps elves have been responsible for dismantling parts of the wall. The reticent neighbor’s only reply,

It is interesting to note that it’s the narrator and not the “old-stone savage” across the way who told his neighbor the wall needed mending. If hunters come along and undo the wall, the narrator fixes it. He requires it to be done once a year as if civilization hinges on this shared act of making barriers.

There seem to be contradictions as the narrator remarks that a wall would only be necessary if there were cattle to keep in place, except “here there are no cows.” He continues:

Before I built a wall I’d ask to know
What I was walling in or walling out,
And to whom I was like to give offence.”

There have always been walls, such as: the Great Wall of China, Hadrian’s Wall, and the Berlin Wall.

Frost reminds us there are some that do not love walls, but there are also those that do.

Something there is that doesn’t love a wall,
That sends the frozen-ground-swell under it,
And spills the upper boulders in the sun;
And makes gaps even two can pass abreast.
The work of hunters is another thing:
I have come after them and made repair
Where they have left not one stone on a stone,
But they would have the rabbit out of hiding,
To please the yelping dogs. The gaps I mean,
No one has seen them made or heard them made,
But at spring mending-time we find them there.
I let my neighbour know beyond the hill;
And on a day we meet to walk the line
And set the wall between us once again.
We keep the wall between us as we go.
To each the boulders that have fallen to each.
And some are loaves and some so nearly balls
We have to use a spell to make them balance:
“Stay where you are until our backs are turned!”
We wear our fingers rough with handling them.
Oh, just another kind of out-door game,
One on a side. It comes to little more:
There where it is we do not need the wall:
He is all pine and I am apple orchard.
My apple trees will never get across
And eat the cones under his pines, I tell him.
He only says, “Good fences make good neighbours.”
Spring is the mischief in me, and I wonder
If I could put a notion in his head:
“Why do they make good neighbours? Isn’t it
Where there are cows? But here there are no cows.
Before I built a wall I’d ask to know
What I was walling in or walling out,
And to whom I was like to give offence.
Something there is that doesn’t love a wall,
That wants it down.” I could say “Elves” to him,
But it’s not elves exactly, and I’d rather
He said it for himself. I see him there
Bringing a stone grasped firmly by the top
In each hand, like an old-stone savage armed.
He moves in darkness as it seems to me,
Not of woods only and the shade of trees.
He will not go behind his father’s saying,
And he likes having thought of it so well
He says again, “Good fences make good neighbours.”

If you were one of the two people depicted in this poem, which would you be? Can you see other ways in which “mending” could be interpreted? What are some of the positive aspects of mending a wall? What about the negative? Is there a restorative feeling to the poem with repairing what has been damaged or does mending the wall seem oppressive?  Think about these questions and respond with a poem of your own.

Here is a recent poem by Rick we enjoyed:

I remember the mystery of the rainbow,
its invisible waves caught in a web of words,
ending always beyond me—over the ocean,
nestled in the slow furrows of mountains, repeating
itself against the snow like the echo of a whisper.
At nine I thought it was merely a trick of light.

My life is defined by what hides in light.
Are we all not the prism, reality the rainbow?
And those who come and go, leaving a whisper
or a vision of who we are—paintings, music, words—
ideas that pry at the world within us, repeating
the colors, rhythms, and sounds like shores of an ocean,

or rising like keelhauled treasure freed from depths of ocean,
the flotsam that floats unknowingly toward the light
of language lifting it, calling into darkness, repeating
like a whip-poor-will against the night’s veiled rainbow,
calling out from the wreck of dreams, waiting for the words
we heard once through water—distant drum and whisper.

I live now in mountains, the dry pines whisper
near my window―clouds in moonlight—recall an ocean
that showed me the mask of time, left me searching for words
to describe the terrible force that shatters love to dust, light
enough that it never falls again, but colors the edge of rainbows
and sunsets like a delicate heartbeat forever repeating.

And why do I write these lines, as if in their repeating
someone will hear after a rain, at the end of day, a whisper,
because to shout would wake me much too soon—oh rainbow,
rainbow, forgive me, so long in learning you, I had oceans
to cross and mountain roads that rattled me before I saw your light.
Now I am only a prism for you, nothing more—a spectacle of words.

I am empty except for love and at the risk of repeating,
forgive us all for our complexity, let us drown in whispers
of what is truly human, simply light, hidden but for rainbows.