Here I am working on only my third barista badge. I have a ways to go, but I can’t look too far ahead. If I do, I’ll panic and start muttering in the streets about having to recite all “The Love Song of J. Alfred Prufrock” at once. This is a long poem, so I know it’ll take time, but I really thought I’d be further along by now. Part of the problem—and maybe it’s not really a problem—is something Glynn Young said, “Discovering poetry and poets can be something of a rabbit trail.”

Because I’m paying more attention to the words, I’m seeing things I’ve missed before—or just skipped over. I’m noticing rhymes and repetitions, though I haven’t yet figured out a pattern. I got sidetracked with researching sawdust restaurants and oyster shells. I even phoned a few friends. It turns out that sawdust was sprinkled on floors to absorb spills (and smells?) from, shall we say, rowdy patrons. And oysters were a cheap eat—as well as a possible aphrodisiac. Clearly Prufrock wasn’t inviting me on a date to the most savory part of town, which makes me curious about these women and this room and Michelangelo.

I took a break and backed up to that Italian stuff, I mean the epigraph, a “funny literary convention” that excerpts lines of another work to introduce a piece of writing. I don’t understand a word of it (yet), but I know it comes from Dante’s “Inferno.” It seems wise to read that to better understand, so I downloaded a Kindle edition of The Divine Comedy translated by—wait for it—Henry Wadsworth Longfellow. I need to sit with that revelation for a bit. Am I the only one who didn’t know the dude who wrote “The Song of Hiawatha” and “Paul Revere’s Ride” also did translation? In Italian?

Jumping down to the second stanza (after Michelangelo’s refrain):

The yellow fog that rubs its back upon the window-panes,
The yellow smoke that rubs its muzzle on the window-panes,
Licked its tongue into the corners of the evening,
Lingered upon the pools that stand in drains,
Let fall upon its back the soot that falls from chimneys,
Slipped by the terrace, made a sudden leap,
And seeing that it was a soft October night,
Curled once about the house, and fell asleep.

Struggling to get that correct made me want to curl around the house and go to sleep like my yellow cat. But, by Thomas, I got it. Then, in the next stanza, it’s the yellow smoke that’s rubbing its back on the window-panes. That reversal disturbed my universe for more than a minute.

While I was dealing with this foggy situation, I thought about Carl Sandburg’s poem.

It sits looking
over harbor and city
on silent haunches
and then moves on. I got to wondering who came first, Tom or Carl? Were they contemporaries? Did they know each other? Should I already know this? Did I maybe already learn that in high school or college?

Some say Sandburg sometimes copied other poets and that he published “Fog” a year after “The Love Song of J. Alfred Prufrock.” It might be true.  As the story goes, Eliot was not a fan of Sandburg’s poetry. Sandburg thought Eliot had no sense of humor. And I get the idea they were politically polar opposites. One day they both ended up in their publisher’s office at the same time. The publisher, fearing fireworks, tried to confine them to separate offices while he, in his words, went “to the John or something.” He says that when he came back just five minutes later, “Carl was sitting in my office, right next to Eliot, and Eliot had a big grin on his face. Carl said, ‘Bob, look at that man’s face. Look at the suffering in that face.’ And Eliot shot back, ‘You can’t blame him for the people who ride on his coattails.’”

Now where was I? Oh yes. Working on my third barista badge. I’ve got time. Indeed there will be time. And when I complete this section, I’ll treat myself to some toast and tea. 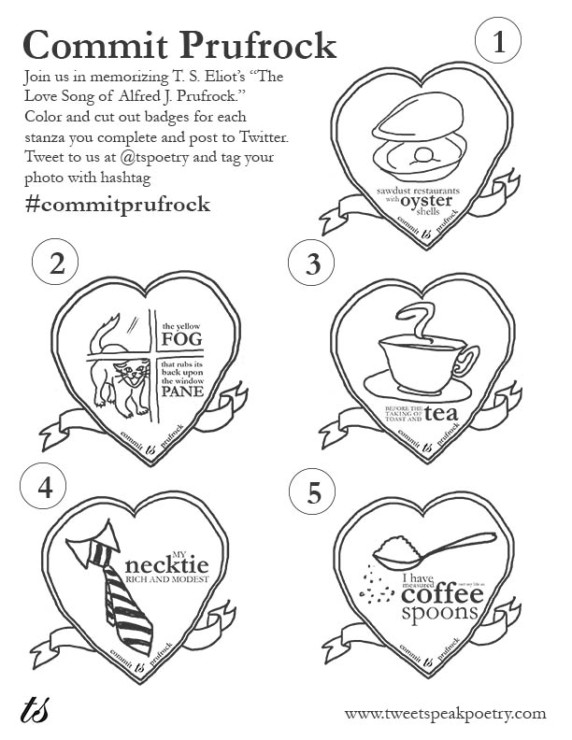 Editor’s Note: In the coming weeks, Sandra will update us on her progress and strategies for committing Prufrock. Stay tuned on Facebook and/or Twitter, where she’ll feature live video updates. We’ve given Sandra the option to Phone a Friend, so be prepared in case she calls on you to help with some Italian pronunciations or to learn a little about a part of the poem, or even to recite a stanza with her.

Want to commit Prufrock with Sandra? Download your own Committing Prufrock Poetry Dare Printable Barista Badges that you can cut out and color to celebrate all 15 sections as you memorize them. Tweet a photo with your badge to us at @tspoetry and use the hashtag #commitprufrock.

BUY HOW TO READ A POEM NOW