Early one morning a couple of weeks ago, I had my reasons for listening to Leonard Cohen sing so long to his Marianne. Little did I know that just hours before, he had been singing so long to us all. The coaxing to “laugh and cry and cry and laugh” was still humming around in my head later that day when I saw the first announcement of his death scroll by on the screen. It’s possible by then I had fully dispensed with any laughter and was considering tears.

Cohen’s unique relationship with the monastic life has long fascinated me, since I first came upon The Book of Longing, his volume of poems written during his five years at a Zen monastery in Southern California (among other places). Pico Iyer, who joined Cohen at the monastery for a time, notes in his short book The Art of Stillness that Cohen’s “name in the monastery, Jikan, referred to the silence between two thoughts.”

The silence between two thoughts.

Far from silence for its own sake, such a silence assumes thought. More than one thought, as a matter of fact. Such a silence, one can also assume, is what animates those thoughts. And perhaps one could take it just a step farther and wonder if such thoughts would be at all possible without the silence in between. 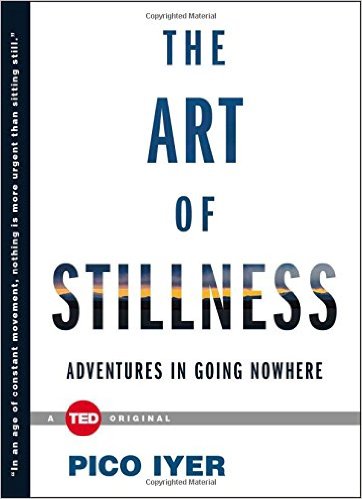 In these days — those attended by the noisy activity of the approaching holidays as well as the din of the tumultuous world around us — we invite you in to the space between thoughts, on a trip to that place Pico Iyer would call Nowhere, in our new book club discussion of Iyer’s The Art of Stillness: Adventures in Going Nowhere.

We’ll begin our discussion on Wednesday, December 7. I’ll post here to get get us started, and will invite you to share your thoughts (and a link if you post on the book to your own blog) in the comments.

Come away to Nowhere with us.

Watch Pico Iyer’s TED Talk for a preview of the book:

Buy The Art of Stillness

I used to be a claims adjuster, helping people and insurance companies make sense of loss. Now, I train other folks with ladders and tape measures to go and do likewise. Sometimes, when I’m not scaling small buildings or crunching numbers with my bare hands, I read Keats upside down. My first novel, Adjustments, is available now.