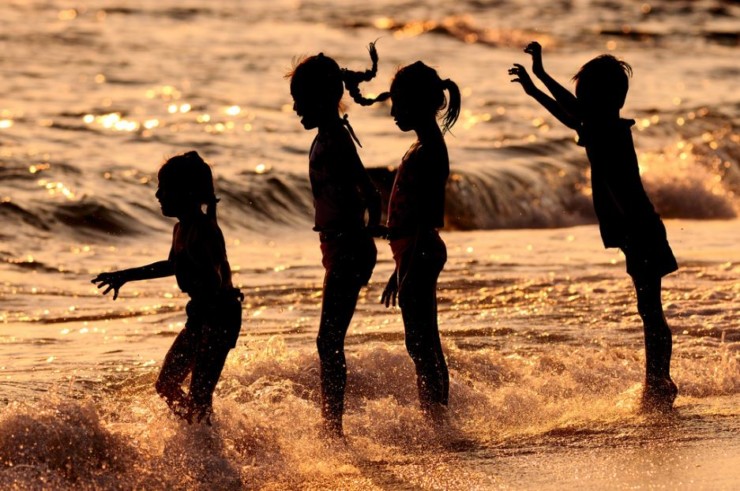 We consider that part of our reason for being in the world is to help paint poetry in the public square. Whether literally or figuratively, we believe that as much as poetry is a fine intimate pursuit, it also has its place in public spaces. This aim is at the heart of three of the public days for poetry we sponsor and celebrate, but perhaps no more so than with Random Acts of Poetry Day.

Yesterday, folks around the globe recited poems in meetings and around tables and in locker rooms and dance class, chalked poetry onto the sidewalk and stuck it under windshield wipers, paired it with cupcakes and performed it before government bodies. Most of it made us smile. Some of it made us chortle (that’s sort of like chuckling, but with poetic cupcake in your mouth).

Here’s a random sample of some of the random acts of poetry we saw yesterday. (And if you missed out on the day, or just didn’t quite get enough of it, you can extend the celebration and “say it with a poem” along with our friends across the pond at Forward Arts Foundation and today’s National Poetry Day.)

Forget the Rural Juror. One of our team got called for jury duty this week, and took Random Acts of Poetry straight into the courthouse. Tip for future jurors: cameras (and firearms, we imagine) will be confiscated, but your quiet little poets on popsicle sticks will make it through the body scanners just fine.

"I have measured out my life with coffee spoons" —T. S. Juror Eliot#juryduty #raopoetryday pic.twitter.com/Sb6m1YmGVg

But poetry didn’t randomly stop at the courthouse. In Thunder Bay, folks at City Hall performed poetry before the council meeting.

Some folks wisely took poetry on their random trip to the DMV.

All offices in the City Hall of the City of St. Louis received a donated 2016 #7GP winning student's #poem on the Random Acts of Poetry Day

Turns out yesterday was also World Teachers Day. Teacher Stacy Goddard challenged her students to go public with poetry and they shared their activities all over Twitter.

Would you like a poem with those fries? ("Hunger" by Robert Laurence Binyon) #RAOPOETRYDAY @GoddardStacy pic.twitter.com/8l4mJazVBN

Natalie's answers the movie question on the board at @caribou_social with Disney poem. #RAOPOETRYDAY pic.twitter.com/AgJEYQCLXt

Check out Stacy’s Twitter stream for more her students’ activities. We saw all kinds of other random school poetry:

Like we always say (actually, we’ve never said this, but we should start saying it immediately), nothing paints poetry in the public square like cupcakes. Really. How could we have missed this before?

And here are all those other poetic utterances that don’t fit into any of my neat category but made a splash wherever they landed.

I just committed a Random Act of #Poetry. 🙂 Slipped a homemade card into a neighbor's mailbox! https://t.co/2GafTDDVUy… #RAOPOETRYDAY pic.twitter.com/1OpsuZksmu

A little lunchtime randomness for #raopoetryday. Yes, it's a poem about a chipmunk. #chipmunksmakegreatpoems

Another wall! (I love this little poem placement)

This was me last week putting up a poem early for Random Acts of Poetry Day 2016. It's still holding up pretty well cept someone leaned on a couple of lines at the bottom and rubbed it out. #raopoetryday #raopoetryday2016 #randomactsofpoetry #poetsofkuching #Repost @calligraphyaf with @repostapp ・・・ Chalking the wall at @indahhousekuching – a time lapse. #chalkcalligraphy #calligraphyaf #raopoetryday #calligraphy

Today's project! . #Repost @calligraphyaf with @repostapp ・・・ Big chalking project at @indahhousekuching today! I asked if I could put a poem there for #raopoetryday and they said I could. Thanks Trudy and Colin! #calligraphyaf #calligraphy #chalkcalligraphy

People can be more than one thing and still be whole. Life is not black or white, one or the other. The Universe is a jumbled mass of chaos and beauty. So why should I be any different?

Today is Random Acts of Poetry Day. I slipped excerpts of my poems into books at a library. Here's a snapshot of one. #raopoetryday #poet #poem #stanza #random #library #books #literature #miracle #raopoetryday2016 #chapter #writing

Not sure when #raopoetryday was, but I still appreciate this.

Original can't be replaced. Real can't be duplicated. When you try to package authenticity for the masses, it ends up looking like white people with Iban ink on their red necks calling the bunga terung a "Borneo Rose" when roses… don't even grow in Borneo, bro.

First of the day! Left among the coffee sleeves at a cafe…#raopoetryday pic.twitter.com/MMRMH5ESrS

If anything says Random Acts of Poetry, this might be it right here. To drop a poem at random in a construction zone not knowing who might find it, who might need it. This is the very heart of this very special day.

Third of the day: dropped in a construction zone walkway#raopoetryday pic.twitter.com/XoC4hR3Zlj

Photo by Pai-Shih Lee, via Flickr. All rights reserved; used with permission.