From a faraway, wagon-train view from the plains, what stands out as you lift your gaze toward Colorado Springs is Pikes Peak—one of Colorado’s fourteeners; the purple mountain of “America the Beautiful” fame. But from the up-close, local’s perspective, the view of Pikes Peak is always framed by red sandstone rocks lifted high into formation, like a frontispiece: Garden of the Gods.

Designated in 1971 as one of the National Park Service’s National Natural Landmarks, Garden of the Gods is my go-to place, whether I want to show off our hometown to houseguests or go on a hike to catch up with a friend. Here’s why Garden of the Gods draws out-of-town visitors as well as locals who have lived here for decades:

Of course, the rocks. Many of the red layers have ascended into a vertical or near-vertical stance. Gateway Rocks and Kissing Camels, in obvious view from the road, are perhaps the most prominent rocks in the park, especially if the moon’s position is just right and you catch its entire circle centered through the opening under the camels’ kiss. When I hike with my son, though, I find one of the lesser-known, less visible rocks more satisfying—Siamese Twins or Balanced Rock—perhaps because it takes a little trek on a trail to get there, and I come home with red dust on the soles of my shoes. Or, perhaps because hiking to an out-of-the-way rock translates to a relaxed, cozy one-on-one conversation with my youngest. 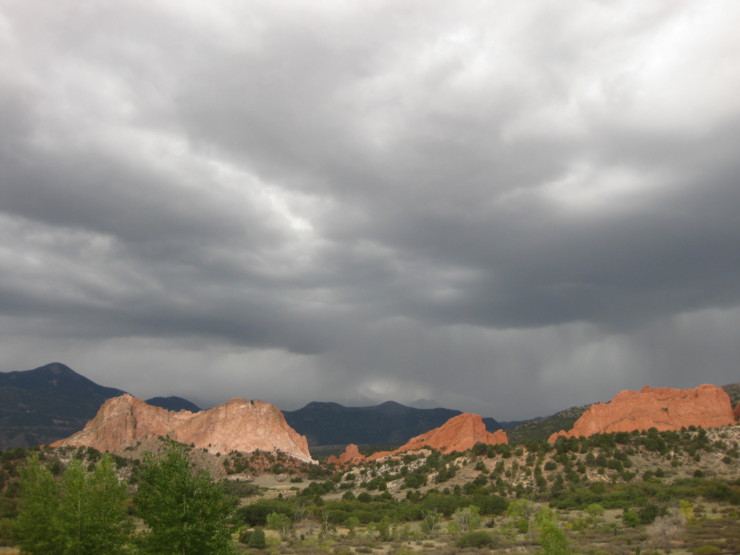 Gateway Rocks from Visitor and Nature Center – Garden of the Gods, Colorado

Signature Rock, located by the paved trails near the main parking lot, amuses me. A nearby sign warns visitors not to touch and therefore efface the “historical signatures”—names which mid-nineteenth-century pioneers and prospectors graffiti-engraved into the rock.

One of my favorites is a rock which, unlike Three Graces or Sleeping Giant, has not been officially named. It literally holds a heart within its surface. Only four autumns ago, while taking our beloved Aunt Ann (an out-of-town house guest) through the paved central trails, did I notice a perfect swirl of a heart tilted and impressed into the red stone. Unnamed Rock with Heart Embedded – Garden of the Gods, Colorado

Though several signs warn against climbing, especially on wet rock, technical rock climbers may come with their ropes and carabiners…with registration and a permit.

The red sandstone alone is striking enough. But combine that with a Colorado-blue sky, or the quickly shifting clouds of a mountain climate, or the impossibly vibrant yellows of autumn aspens, or snow, and it’s more than enough to attract any photographer—not just the pros like John Fielder, David Muench or Todd Caudle, but anyone with a point-and-shoot. More than once I’ve seen a fellow hiker with a camera bag slung over one shoulder and a tripod balanced over the other. The photographers’ subject matter includes not only the landscape and scenery but also…

Birders, bring your binoculars and listen. You might come across a red-tailed hawk, a prairie falcon, or white-throated swifts dipping and rising in flight, clouds and sky and high sandstones as their backdrop. Look in the many nooks dotting the North Gateway and South Gateway Rocks, and try to catch a snatch of bird (or bat) in flight, entering or exiting the small caves. At the northern boundary of the park, look into the cliffs. Train your eyes to watch for movement, or else you might miss the Bighorn Sheep. Siamese Twines with Pikes Peak in background – Garden of the Gods, Colorado

With 15 miles of trails, and loop options ranging from 0.5 to 3 miles, you could regularly run into a variety of hikers (solitary or in pairs or groups), dog walkers, or the high school cross-country team doing intervals using the Garden of the Gods trail system. The Perkins Central Garden Trail (named after Charles Elliott Perkins, who purchased Garden of the Gods and whose children gifted the land to the City of Colorado Springs in honor of their father’s wish that it be “kept forever free to the public”) is an easy, paved path from the main parking lot. Of course, Garden of the Gods offers more than these five favorites—a newly renovated visitor center and museum, and Segway and Jeep tours, for example. But for me, the wonder of these rocks hits close to home, not only in the sense that they’re close enough for me to jog to, but because I’ve climbed over boulders there with my family; I’ve had hour-long conversations with my friend Carol, taking her Miniature Schnauzer on a walk; I’ve taken snapshots of my mom with her arms outstretched in front of the tall and narrow Three Graces in winter. And over the better part of two decades, the sandstone from the trails has left a sort of dusting on my soul, a sort of imprint, like the swirled heart embedded in the rock.