It could be said that the magician was simply doing the very thing he was put on the earth to do: Magic. Amazing, mysterious, impossible magic. How long he had been performing magic is something we aren’t able to know. But it had been long enough, apparently, that making lilies appear from nothing had become commonplace. Too commonplace. On the night the magician made an elephant appear, the lilies were not enough. Confronted with the self-realization that he had “wasted his life, ” the magician sought to rectify the matter the only way he knew, with magic. “He wanted to perform something spectacular, ” Kate DiCamillo writes. (Small-minded though it may be, I should think I would have found lilies, made to appear where there otherwise had been none, to be quite spectacular.)

He had intended lilies; yes, perhaps.

These things that magicians conjure, they do not truly appear from nowhere. Perhaps it is not so noticeable with lilies, but an elephant—she would have to come from somewhere. And when she did, she would surely be missed where she came from (and was no longer) and where she appeared, she would not belong.

The elephant opened her eyes and looked around her and realized she did not know where she was.

She only knew one thing to be true.

Where she was, was not where she should be.

But how could this possibly be? If it were indeed true that this feat was the “most astonishing magic of his career, ” the greatest work of a man doing the thing he was born to do, how could it be that such a thing would also bring about so great an injustice as permanently injuring a noblewoman who will never again ask for a front row seat, and uprooting not lilies but an elephant from her not so remarkable (at least in elephant terms) life where she was happily enough living it?

It is often said that “Just becauses you can doesn’t mean you should.” The expression is quite memeable (with even Mr. Bean getting into the act). One could say that the magician should have exercised self-restraint, should have put aside his visions of grandeur, let go his last chance to make a real name for himself as magician fame goes. But to ask him to be satisfied with lilies that would hurt no one, and not cause such suffering for others, it could be argued we would be asking him to do the unthinkable: to be less than he could be.

I assure you, I intended lilies. I intended only a bouquet of lilies. (p. 44)

And yet, The Magician’s Elephant is quick to remind us from time to time, starting with the fortuneteller herself (who, after pocketing Peter Augustus Duchene’s florit and giving him the outlandish revelation that it was an elephant who would lead him to his sister) who says that “the truth is forever changing.”

The elephant, we’ll learn, who was summoned unjustly by the magician in an act of magic we can all agree in hindsight should never have been performed, is the key to Peter finding his beloved but thought-to-be-dead sister. “She lives, ” the fortuneteller says. She lives.

So then, was this an act that should never have been performed? A unimaginable cruelty to the elephant and the noblewoman? Or was this act a great kindness that would reunite the long-separated and lead to a happy life for them both in a home that longed for children?

I am forever wondering as I read this tale, is the truth forever changing, or are multiple things (impossibly conflicting things) true at the same time?

“Wait a while, ” the fortuneteller said. “You will see.” 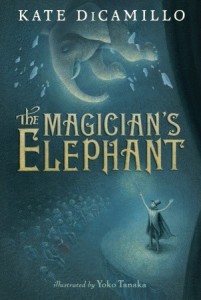 We’re reading The Magician’s Elephant together this month. Are you reading along? Perhaps you would share your observations about the way we exercise our passions and the ever-mystifying nature of truth in the comments.

During our book club, we’ll be exploring some of the overarching themes of the book together, rather than a chapter-by-chapter conversation, so you’ll want to read the whole book before we begin. (Don’t worry, it’s not a book you’ll want to set down once you start anyway.) Then, join us for thoughtful discussion here in the comments again for our last segment, next Wednesday, September 21.