The Grohmann Museum features the world’s largest comprehensive art collection dedicated to the evolution of human work—a gift to the Milwaukee School of Engineering (MSOE), which houses and curates the unique collection of 1, 000 paintings and sculptures from 1580 to the present that depict a variety of artistic styles chronicling the evolution of organized work.

As I climb the stairs to the roof, where the museum staff advised I begin my visit, I wonder if each engineering student is required to pass through and not only ponder the evolution of work, but also consider how machines and man fit together.

The museum’s rooftop sculpture garden served as the starting point for my self-guided tour. Larger-than-life-size bronze figures stand on the roof’s edges—each a worker, mostly muscular men, wielding some kind of tool, like a water bucket, hammer, or saw—inviting the visitor for a closer look with the backdrop of a cityscape. On this beautiful day, with its clear blue sky and light breeze, I could have lingered with these engaging sculptures all afternoon, but I had move on if I wanted to work my way through each exhibit.

On the third floor, I witnessed scenes of taxidermists, chemists, moneylenders, barrel makers, carpenters, geographers, cobblers, and violin makers. Vignettes included lace makers and piano makers, apothecaries and chicken feather stripping. One scene captured “Barber’s Day at the Monastery, ” and I tried to imagine barbershop conversation with monks in the 1600s. Did the monks even speak?

A collection of paintings depicted early medicine and medical diagnostics, and included physicians, alchemists—even quacks. One painting, a Dutch piece dated from 1613-1675, is actually titled “The Quack.”

This floor seemed to document the wide range of workers including gardeners, a paper boy, a chef’s boy, clam gatherers, and all kinds of smiths (such as black-, gold-, and coppersmiths), as well as glass and ceramic craftsmen.

Moving down to floor two moved me forward a bit in history. Here, I saw horse carts as well as railroads, cider mills, sawmills, loggers, bridge and highway construction, fishing scenes, water wheels, harvesting, and scything. A large piece depicted an activity less familiar to people in the Midwestern United States: the work of seaweed gathering. 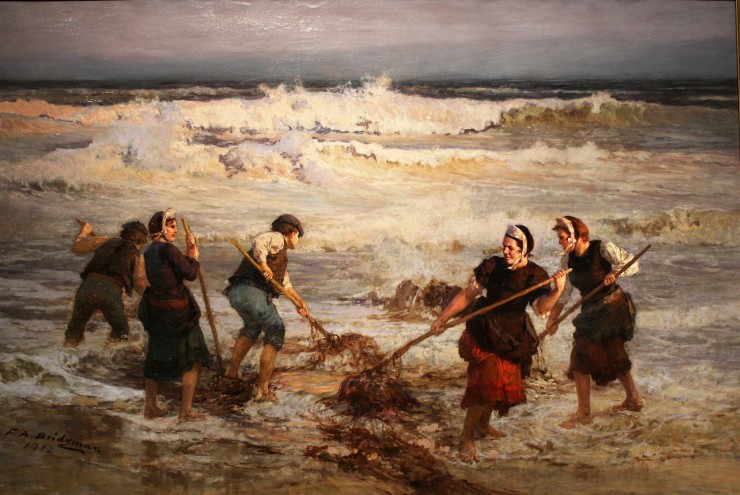 The Grohmann Museum honors Milwaukee’s brewery history with the “Le démêlage, brasseurs à Béthencourt, ” or “The Mashing Brewers at Bethencourt, ” (by Eugène Decisy, 1866-1936), which shows men diligently standing around steaming barrels at a brewery. A large room is dedicated solely to several of Carl Spitzweg’s works, which have a whimsical, light-hearted feel. A piece that had me chuckling was “The Bookworm.” In this painting, a man is standing on a ladder in a large library, reading a book that lies open in his left hand while holding a second book in his right hand, a third tucked under his left elbow, and yet a fourth gripped between his knees. A true book worm. The man featured in Spitzweg’s The Poor Poet lies on a thin mattress on the floor. An open umbrella is positioned in the corner of the room near the ceiling, presumably to stop the roof from leaking onto the poor man’s head. Judging by the papers in his hands, he is reading or constructing a poem. He owns little, but seems to have invested his hard-earned pennies to purchase books piled next to him on the floor. In this one scene, the artist suggests that the dedicated poet must pursue a calling, born out of love for the craft, and will endure poverty and misery to remain true to his vocation.

The Washerwomen of the Breton Coast is a lovely scene of women gathered at the shore of a body of water, immersed in their work. They are all wearing head caps and outfitted in simple clothing. One is looking out into the distance toward the water; several are wringing and rolling out garments; another is carrying a basket on her head, heading away from the group. All seem busy, a bit sober, and intent upon doing their work, with no time for small talk or gossip. 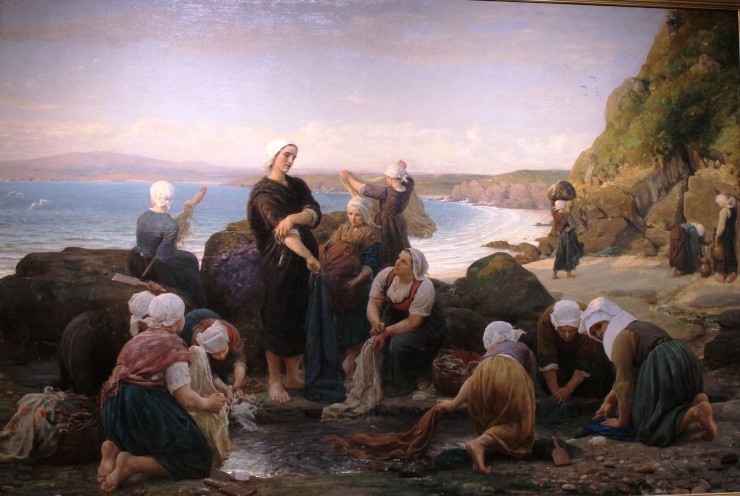 Moving down to floor one, I surveyed mining scenes, where artists depicted the lonely life of a miner and the tragedy of mining accidents. This final floor included an emphasis on steel and steel workers. A 22-minute mini-documentary called “Rhapsody of Steel, ” produced in 1959, documents the story of steel in an unusual format, combining actual footage with cartoons. This “rhapsody” ends with the quote: “The progress of man is the progress of steel.” As the film fades, I think about the progress of man, and steel, and art, and work. I step out of the tiny theater and re-enter the gallery, passing stained-glass windows created from images of a few of the paintings, including “Stacking Grain Sheaves, ” “The Tower of Babel, ” and “The Carpenter’s Workshop.”

On the first floor near the entrance, I stand on a mosaic that depicts five men and women at work in some form of manual labor. Looking straight up from this point, I can see a circular ceiling mural. The mural has a wheel in the center of the mural, acknowledging the importance of this invention. On one side, a doorway with the words “carpe diem”—seize the day—reminds students their time is valuable.

Maybe this is a hint of how machines and man fit together. Or maybe a key comes from the words painted on this mural created by a 14th century architect: “Scientia sine arte nihil est.”—“Science without art is nothing.”

Featured photo by Jeramey Jannene,  Creative Commons, via Flickr. Other museum photos courtesy of the author. Post by Prasanta Verma.