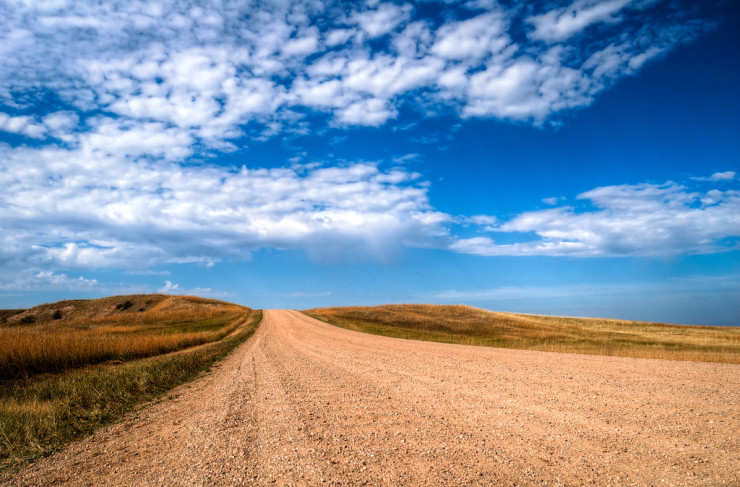 I have a recurring dream where I’m running down a deserted rural highway. The pavement is worn, its more prominent cracks patched in the hot summer sun with rubberized asphalt sealant in a modified Band-Aid configuration. The reflective yellow paint is peeled away in spots, with short scrub grass cut in here and there where it’s crawled up out of the ditch. The broken up stripe separates the roadway from the narrow ditch, a shoulder just wide enough to park a bicycle, but not nearly enough to get a whole automobile fully out of traffic if a guy’s timing belt should break just before the sun began to dip below the low rise of the purple Coteau on the western horizon.

The sun does set in the west, right?

I’m running because there’s a gravel truck behind me and it’s my preference, even in dreams, not to be run over. Especially by a gravel truck. They hit hard.

You might think I could just lunge to the side, do an artful drop-roll into the ditch and let the truck go by. It’s a dream, after all, so I won’t probably notice the scratchy weeds poking into my rolled up Oxford shirtsleeves and the sort of bugs that thrive in the dried grasses of the South Dakota prairie would surely be unimpressed enough to leave me alone. You could argue that they wouldn’t be attracted at all to the warm, sweaty skin around my neck, now lightly coated with the fine dust blowing across the just-harvested wheatfield beyond the barbed wire fence.

Of course, you’d be wrong. About both jumping into the ditch and the bugs.

Jumping into the ditch isn’t an option because I need to outrun the truck. You see, the lift gate isn’t fully latched. Every time the truck hits one of those patched cracks, it flips open and gravel sprays out of the back. The load in the hopper keeps gets smaller and smaller as little rocks bounce wildly in every direction over the pavement.

Just like in some high-speed hourglass metaphor, I keep running faster and faster because I need to reach my destination before the gravel runs out, an effort complicated by my not knowing where that destination is.

Here’s the part of the dream where I wake up and tell you it isn’t true. That I haven’t been having this dream; I just made it up. This is the way it works in dreams. And in serial fiction writing.

I wrote the first 400 words of Adjustments in April 2013. Since then, I’ve written about 112,000 more. It’s been just about a year since we decided not to wait until the novel was finished and to run the story instead in a serialized format, releasing an episode at a time in our [now patron-only] weekly newsletter.

So there’s the hitch: We’re publishing, little by little, a story I haven’t finished writing.

If I were still telling you about the dream, I might describe the enormous pterodactyl that swoops in now and again carrying a large canvas sack that looks a little like a mail bag in its mouth. The sack is full of more gravel, and when he gets over the top of the truck, he empties it out into the hopper. We release about two to three times the amount of content I am producing each week. Once upon a time, I was a good 50, 000 words ahead of myself. But I’m only running about 15, 000 words ahead these days. The pterodactyl puts less in than goes out the back. The gravel truck is gaining on me.

Writing serial fiction, like trying to outrun a gravel truck on a lonely South Dakota highway, is both exhilarating and confounding. Wait. Scratch that. Trying to outrun a gravel truck is probably not exhilarating. But it’s too late: I already said it, you already read it, and I can’t take it back. So I need to find a way to run with it. That is exactly how writing in a serial format, with near-simultaneous release works.

Here are some things I’m discovering in this unique writing context:

I write Adjustments weekly. Or, that’s the plan. But sometimes the plan doesn’t work. When one writes on the weekends, sometimes weekend activities or visitors preempt the coffee shop. Over the course of three years, you might rightly imagine lapses where writing inspiration did that drop-roll into the ditch and left me empty-handed, or where life events simply took precedence. Now that I have only a few weeks of a buffer, I have little room to disrupt the weekly writing practice. This has been helpful in teaching me to stay with the writing, work through temporary blocks, and produce week after week despite what I might otherwise feel like doing.

2. Be ready to improvise

A person who travels on rural highways must be ready for anything. There may be a pothole to dodge. One might find himself nose to nose with a big Hereford cow on the road. It’s easy to lose track of where one is going or how to get there. Since the first day I sat down to write this story (which, I admit, I did in part in order to prove it couldn’t be done), I haven’t known where the story was going. Another confession: I still don’t.

This far into the story, I am bound by certain events that occurred earlier on. Sometimes I forget those things happened, and for that I am eternally grateful to have a good editor. There is a certain Barbie doll head that makes repeated appearances in the story. Last week, we ran an episode in which, in the original draft, Will Phillips drops the Barbie doll head into his pocket. I forgot that detail when writing a future episode, and wrote as though the doll head had been returned to Will’s glove box. When the editor caught it, we had to have a conversation about which would be more important: that he put the doll head in his pocket, or that it later reappeared in the glove box. A few hours before the piece went live, a decision was made and the doll head when back into the glove box.

I just finished watching all 7 seasons of a popular television series. It took me about a month to watch what had been written over a period of seven years. Watching television the way that Netflix and Amazon Prime now allow us to do compresses this long process into a short space, and makes plot gaps that would otherwise be pinholes look gaping. The series has ended and I’m still wondering what happened with Alicia’s $6 million malpractice suit in season four, while someone watching over the course of several years instead of a few weeks likely forgot all about it (sort of like the writers). When a writer completes the entire work before publishing, these pinholes can be filled before they become gaping. When one is writing on the fly, (what you could call stand-up writing) it is a greater challenge to ensure they get filled.

You know that old joke about how to eat an elephant. (One bite at a time.) I can’t explain to you how a story arc works because I don’t think in those technical terms; I just know when it does. Since I don’t know the overall story arc of my elephant, I focus on the single bites. When I sit down to write, I have a target length in mind (typically eight to ten longhand pages) and I aim to write a complete scene with a beginning, middle and end (with a tiny sort of cliffhanger at the end to keep a reader interested enough to come back for the next installment). I’ve begun to think of it more as writing episodes within a television series. I imagine that when this story ultimately concludes, many of those smaller bites will in some way mirror the greater whole. But for now, I write small pieces that can stand on their own, which we then assemble over time into a single larger story.

Back in the dream I am not dreaming, I can hear sheep bleating over a low hill. An old weather-beaten farmhouse comes into view around the next curve. The gravel truck is bearing down. I loosen my shirt collar and keep running, arms and legs pumping as hard as they can to get one more scene out before the gravel truck spills its goods again.