There’s no particular form or beauty to draw one’s eye to the old brick building that sits at the edge of Circle Drive. No stainless steel or glass architecture or even interesting sculptures on the grounds. You have to know it’s there, down just a tad from the Beaumont Tower and across from the Red Cedar River and Main Library. The Science and Culture Museum at Michigan State University, established in 1857, is one of the oldest museums in the Midwest and the first in Michigan to become a Smithsonian affiliate in 2001. Its mission is to understand, interpret, and respect natural and cultural diversity. 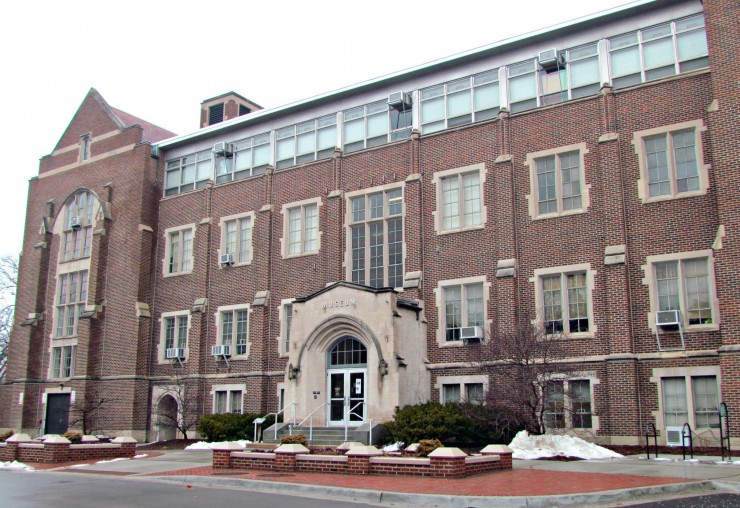 I’m a native Michigander. I got my BSN at MSU, only 25 miles from where I live now. Still, this is only my second visit to the museum—ever. I bring my husband and Grace, our oldest granddaughter, along with me.

After laughing at how fat the campus brown squirrels are in January, we enter the building and begin on the top floor, which seems an odd place to display dinosaur and elephant skeletons. “I’d have placed those exhibits in the basement, ” I say, but then I remember bare bones weigh much less than the bulk they have to support.

We spend some time studying dioramas of seven of the major North and Central America habitats and learn about the diversity of deer designed to live in each, from the small mazama to the bull moose. None of them would likely live well where they don’t belong. We also learn that when Michigan was a young territory and market hunting was legal, deer skins or whole deer were used as money. A deer carcass was worth a dollar, and that’s how a dollar bill became known as a “buck.”

In the 1890’s, a buck could buy you most of your kitchen staples, plus some clothes pins for free. The Heritage Gallery currently houses an exhibit called “Up Cloche: Fashion, Feminism, Modernity, ” and I linger here. I learn a cloche was a bell-shaped, head-hugging hat and was a symbol of women’s rising political and social power in the 1920s. (Ironically, its minimal design led to the precipitous decline of professional milliners who found themselves likely to be slapping simple hats together in a factory.)

The cloche framed women’s new freedoms and new Art Deco fashions, bobbed hair and painted cupid-bow lips. The women who wore them were often known as flappers. While I wondered if that was because they were creating a societal or cultural “flap” by defying traditions, it turns out the term “flapper” originated in Great Britain when women wore rubber galoshes they left open to flap when they walked. Like their galoshes, flappers were often considered “loose” in many ways.

The head-hugging hats and bobbed hair made the hatpin obsolete except for decorative purposes, but that didn’t stop Michigan state senator Joseph Bahorski of Detroit from introducing a bill that redefined any hatpin longer than 10 inches as a concealed weapon. One wonders why he chose 10 inches. I’m thinking I wouldn’t want to come face-to-face with someone wielding a weaponized hatpin even half that long. 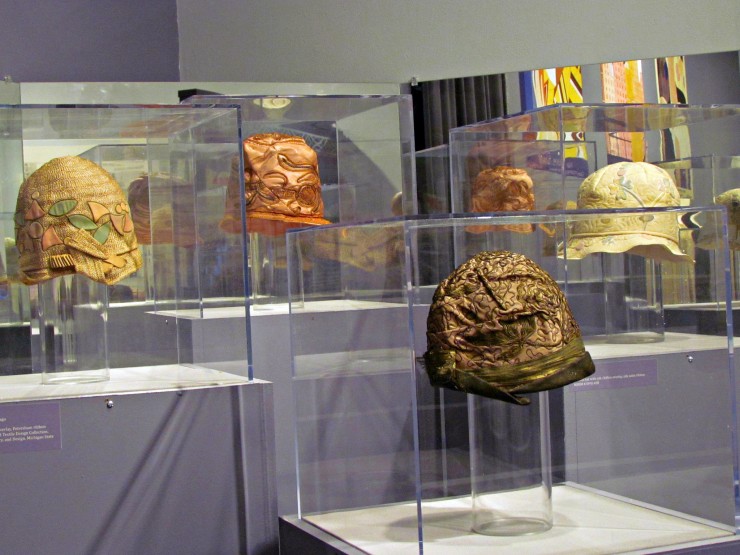 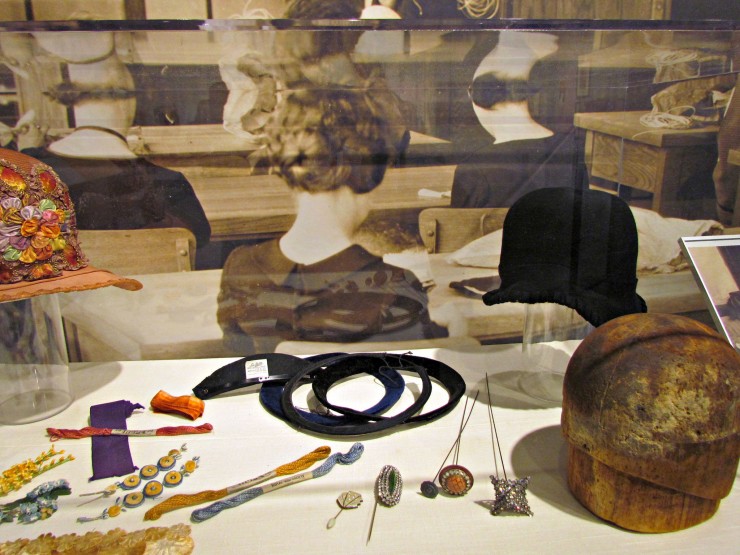 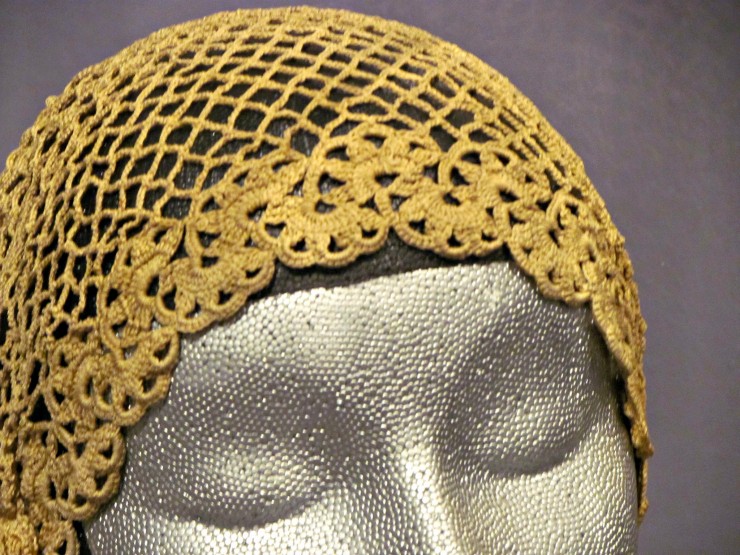 Across the way, in the Main Gallery, hang several quilts from Southwest China. Because I used to quilt, I’m particularly enamored with how these colorful pieced and appliqued patterns help piece together the cultural heritage of the Chinese people, and intrigued at the way the threads of the past can patch holes in the present. 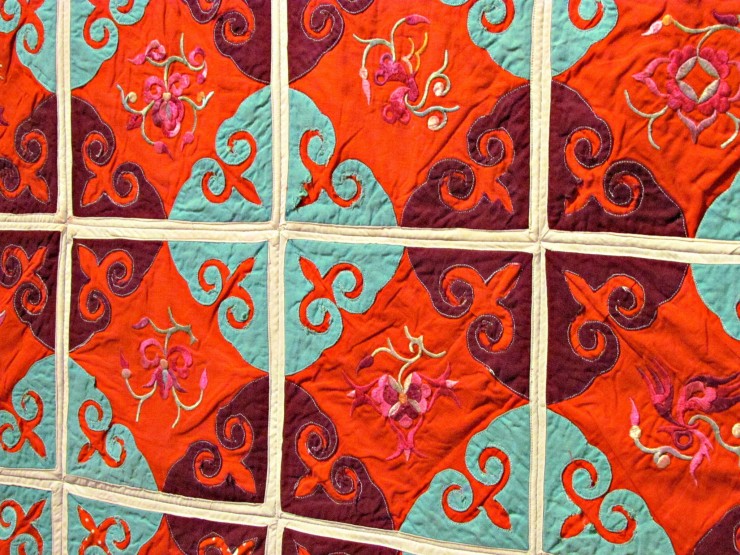 Another exhibit shares the work of an Odawa quill worker who uses undyed porcupine quills, birch bark, and sweet grass to create beautiful boxes. (I don’t know where an artist goes to find quills, but I read that porcupines shed them, and that one porcupine can provide thirty to forty thousand.) Since my granddaughter Lillee’s daddy is Odawa, I’m pleased to learn more about her heritage in the stories and photos displayed. My great-great grandfather passed down a “woody” heritage to me (I may even have sawdust in my veins), so the Michigan lumbering display particularly interests me. There, I find a little poetry.

I am a jolly lumberman, the pinewood
Is my home.
Like many other fellows—from camp to
camp I roam.
On many raging rivers, I’ve been
throughout this land.
But now I’m on the Manistee, with a
peavey in my hand.

It reminds me of Grandpa Baxter’s poem:

Make me a grave on a sunny slope
A pine tree at my head.
A fit place for a shanty boy
To lie when he is dead.
Peel off the bark, hew down the sap,
And there mark well these lines,
“Here lies an old-time shanty boy
From the harvest of the pines.

From “The Harvest of the Pine” by James G. Baxter

Lumber harvested in Michigan in the nineteenth century was over a billion dollars more valuable than the gold of the California Gold Rush, we discover. Michigan trees even helped to rebuild Chicago. Unfortunately, there was not an endless supply, and only 49 acres of old growth pines remain in Hartwick Pines State Park, a reminder of the importance to restore what we use up.

In the Hall of Cultures, a display uses teapots to illustrate the idea that culture is adaptive, diverse, dynamic, and symbolic. Their sizes, shapes, materials, decorations, and uses help us learn about the cultures that used and use them, we’re told. I have a sudden craving for tea and cinnamon toast in the Mischief Café. On the ground floor, a collection explores the effect work has on us and how we affect our work. “Iron Hulls and Turbulent Waters” tells a story of Great Lakes shipping through black and white photos of ore boats and dock workers. There’s a replica of the S.S. Edmund Fitzgerald, the largest ship ever to sink on the Great Lakes. It went down on November 10, 1975, and was found in two pieces at the bottom of Lake Superior. Gordon Lightfoot sang about it in “The Wreck of the Edmund Fitzgerald.” Prior to that, the Carl D. Bradley went down in Lake Michigan in 1958 and the Daniel J. Morrell sank in Lake Huron in 1966.

It seems appropriate that I end my visit with the discovery of a new-to-me Michigan poet, Cindy Hunter Morgan, who shares poignant words about both of these shipwrecks. When we return home, I scour the Internet for more of Morgan’s poetry and connect myself to The Michigan Poet. I remind myself of what beauty can be discovered behind old doors. And I write down the date of the Chocolate Party coming up next month to benefit the museum.