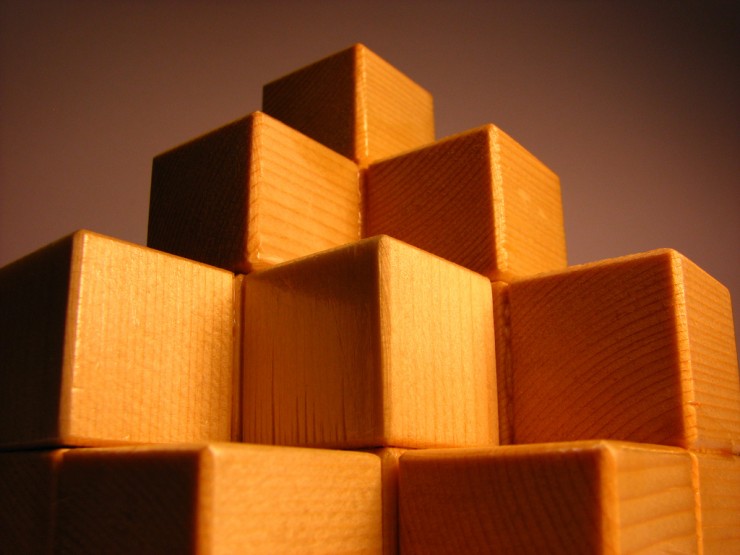 Children are naturals at identifying unexpected building toys, and if you’ve ever noticed a little one in a restaurant busily arranging salt shakers, sugar packets, and silverware into buildings, barnyards, and busy highway systems, you’ll know what I mean.

Block play with any materials that can safely be stacked, layered, lined up, built up, and built outward can foster rich mathematical language as well as dramatic storytelling abilities. In fact, one could say that children are physically building stories as they build with blocks. Imagine a child arranging a line of skinny 1-inch blocks end to end along the floor. If you ask him to tell you about what he is doing, you might get a math-like answer, such as “I’m making the longest block wall in the world. Longer than anyone ever before so I am going to need a hundred million blocks.”

Leave him to it, and he will use every block he can find to build that longest wall, and when he runs out, he will improvise or beg for more of what he needs. He is developing ways of thinking and speaking mathematically, which will grow in sophistication as he returns to block play and as he talks with others about what he’s doing. It’s not surprising that engineers say construction toys inspired their careers.

Another child arranging blocks in the exact same way might provide quite a different response, such as “My train doesn’t have a track, and I said Don’t worry Train, I’ll make one for you,  and so I am building a track for my train.”

Leave her to it and her project will no doubt expand in size, shape, and story. If you check in later and ask, “So, how are things going?” she might lean back, stroke her chin, and perched upon two sneakers with blinking lights built in, proceed to “read” the story on the floor, pointing as she goes.

“Look (points to train)! My train drove aaaalll the way down the track and under a bridge (traces the track with her finger and stops at the blocks built up over the track) and then this kid (points to plastic figure of a child) threw a huge rock off the bridge (points to solid wad of paper on the ground near the train). The rock hit the train (adding smashing sound effects and fist slapping gestures)! The train flew off the track (points to the train, its front wheels off the track). I had to call 911 because the driver was hurt really bad (imitating certain details from a local story that had been in the news and likely on her TV at home).”

She looks around and wrinkles her face. “Wait … I need to make the ambulance place!” She jumps up and takes giant steps over her track and heads to the block shelf, shoes blinking, to gather more materials … and so it goes and grows.

Now it’s chicken or egg time. Which led to what? Did the story give way to the block structure, or was it the other way around? It doesn’t take much mental stretching to see that there is a lot of early literacy being developed, and the groundwork for storytelling is being set. You might even say that the building blocks of written language are being laid. She has, after all, combined a lot of pieces into one dramatic telling with a beginning and middle and with the end yet to be determined somewhere down the track.

With blocks as catalyst, these children are describing situations, making plans and carrying them out, expressing their ideas, and deciding what will come next. I don’t know about you, but it’s hard for me to say what this is most like: a story or a block structure?

Have you ever noticed that when we talk about language we often use words related to construction? We say things like build sentences,  construct story lines in dovetailed sections, strengthen the foundation, and create a blueprint. Sometimes we even have to shave a little off. I can smell the sawdust now. And isn’t it interesting that both a book and building can have more than one story?

The physicality in block play seems to translate to language, too.

This is how I envision the gradual emergence of abstract thought from concrete experiences. It seems to me that through constructive play children use their hands and bodies to build their minds. (In fact, some research suggests that the use of your hands—to build, fix, play—is indeed connected to greater cognitive development.)

A friend of mine from graduate school once said “If I could have only one material in my [kindergarten] classroom I would say give me blocks and lots of them!” Excellent choice, Evelyn. Excellent choice.

Can Lego bricks and other construction toys boost your child’s STEM skills? by Gwen Dewar, Ph.D.

The Importance of Play, Particularly Constructive Play, in Public Library Programming by Sue McCleaf Nespeca for the Association for Library Service to Children