Maureen Doallas spoke with Fred Foote, a retired Navy Medical Corps physician who served in the 2003 Iraq War and currently leads the Warrior Poetry Project at Walter Reed National Military Medical Center in Bethesda, Maryland. He also is the author of Medic Against Bomb: A Doctor’s Poetry of War (2014), winner of the Grayson Books Poetry Prize. Foote’s poems have appeared in numerous periodicals and journals, including Commonweal, JAMA, and The Progressive.

You said in an interview with the National Endowment for the Arts that “poetry’s been my first love ever since I was a kid.” How would you describe your experience of poetry and its role in your life before joining the military? 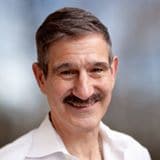 I always wrote poetry but more urgently after treating the wounded (both Americans and Iraqis) on the hospital ship “USS Comfort” during the 2003 invasion of Iraq. That [experience] is the origin of many of the poems in Medic Against Bomb: A Doctor’s Poetry of War, which focuses on the wounded of the Iraq and Afghan wars.

Who were and are your favorite poets?

Whitman and Frost were favorite poets when I was young, and still are today.

Did you write and publish poetry during your medical studies?

I started publishing poetry in 1995. My first published poems were about medicine, and my patients during my residency at Yale.

Throughout the nearly three decades you served in the Navy Medical Corps, you wrote poetry, especially while aboard the “USS Comfort” during the U.S. war in Iraq. What made the Iraq War so powerful a catalyst for poetry writing?

I think the public needs to know about the realities of the war, because we are the Nation. What America does is our responsibility. [My] book tries to bridge the gap between military and civilian. When civilians understand the Wounded Warrior experience, they feel more empowered to help the veteran.

What was “the stuff” of the poems you wrote, and how did writing the poems benefit you personally at the time?

I wasn’t able to write while on the “Comfort” war mission. The strain of doing war medicine was too great. Once I got back to the States in 2004, I was able to start writing about what I’d seen. Writing about the American and Iraqi patients was cathartic, because it allowed me to take a stand against the disaster of war.

Did you share what you were writing? If so, what were others’ reactions?

Many of the poems celebrate the deeds of particular healers on the ship and elsewhere. Some of [the subjects of the poems] have the poems up on their walls. What did you learn about yourself—as a doctor, as a person exposed to war’s ravages, and as a poet—while writing your much-praised collection Medic Against Bomb: A Doctor’s Poetry of War?

Just the need to speak the truth, and how art and healing and reality are all connected.

If you had to describe your collection in 10 or fewer words, what would those words be?

My “pitch” at books fairs: Award-winning poetry about our Wounded Warriors and military healers.

You told your NEA interviewer, “A poem comes as a gift, so I must earn it.” How do you, as poet, “earn” your words?

I always say the poems from memory. I spend about three hours rehearsing for every hour of performance.

Do you have an established writing routine or write poetry daily? What inspires a poem?

I generally write each day.

William Stafford, an American master, used to demand of himself a new poem each day. When asked, “What if you’re no good that day?” he replied, “Then I lower my standards!”

What is your idea of a successful poem?

Invention, movement, and passion. And personal uniqueness—a sense that only I could have written that poem.

[. . .]
The day you brought the scarves down
they pressed your hands
and those not maimed
tied scarves around the heads
of friends who couldn’t move
(silk to die for
new to those
dust-colored homes
only the F-18s
had deemed worth bombing)
Those who thought
They could no longer weep
wept to feel the touch
of simple cloth
And they were once again sacred women.

Foote wishes to make clear that as a retired military veteran and not a federal employee, nothing he shares with readers should be considered to represent the views of the U.S. Government.

In Part 2, Foote discusses his holistic approach to medicine and his Warrior Poetry Project. In Part 3, he talks about another initiative, the Green Road Project, which takes advantage of nature’s healing properties.