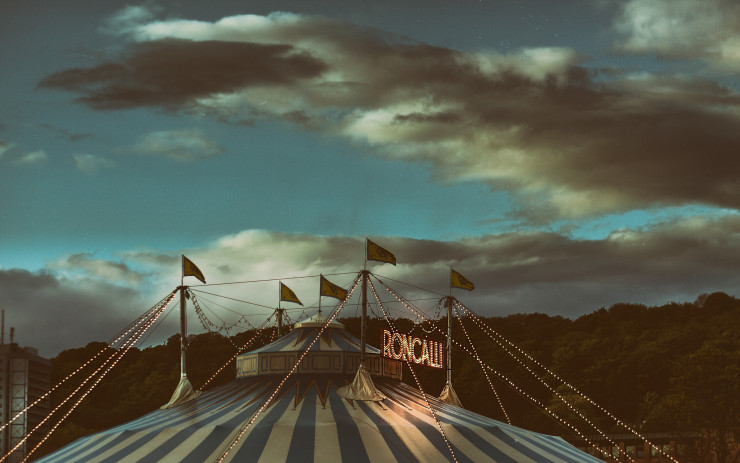 The year 1871 was the bellweather moment for the American circus when P.T. Barnum debuted his Museum, Menagerie & Circus. They featured exotic animals from all over the world, and visitors were first guided through the menagerie before entering the big top to find their seats. This was part of an educational outreach to draw crowds. People flocked to see the animals and shows but Barnum quickly discovered they were running out of room and needed to turn people away. To solve this problem he added a second and then third ring which allowed more visitors at any given performance.

It was an extravagance of performance and spectacle which drew upon Barnum’s philosophy, “Why send out a minnow when a whale will do?”

Today, the circus is still a popular scene, though it became necessary to re-evaluate its relationship to exotic animals. The circus has since changed many aspects of the show in order to blend with the mores of today. There’s a renewed emphasis on the artistic presentation of an act rather than spectacle. The Big Apple Circus works exclusively with domesticated animals and Cirque du Soleil doesn’t feature animals at all. However, there is a market that still loves the traditional three-ring animal circus and The Greatest Show on Earth.

Write a poem about the different types of circus animals, the animal parade of the traveling circus, or an original circus menagerie. Consider writing from the perspective of a child. The wonder of lights, color, and thrilling circus animals.

Let us go then, you and I,
Where the Ferris wheel circles into the sky,
Like a funnel cake upright in my fingers;
Let us go where vendors deep-fry treats,
Of butter and fat meats
And restless crowds spend hours as if some spells
Were cast on them in the House of Haunts,
A curse that followed them insisting
on the penitents of Lent
And the silliness of nutritional type question,
Oh do not ask, “Will it make me sick?”
It’s like a corndog fried in Bisquick..

At the restrooms people come and go,
Holding their stomachs and moaning ohhhhh.