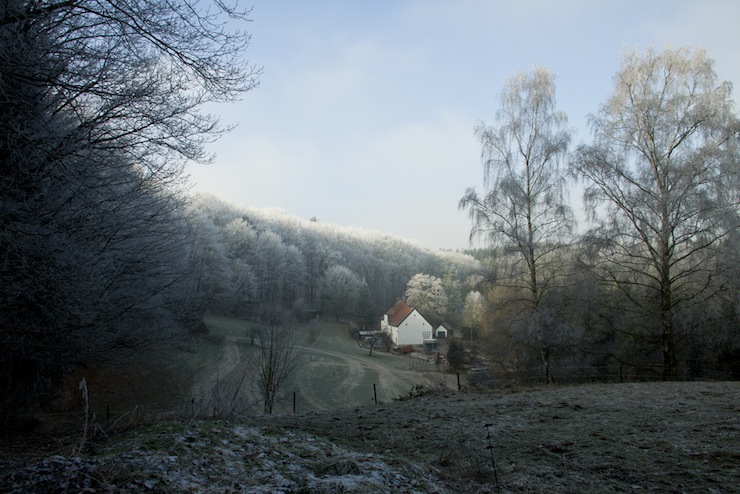 My writing desk overlooks our fenced-in backyard where red squirrels chase each other in death-defying scamps along the edge of our privacy fence and up the bark of a giant poplar. Behind and around me, wooden bookshelves stand sentry over my work. The sun warms me as I sit in front of my laptop sipping apple cinnamon tea, and my four-year-old black Lab, Tilly, lays her head in my lap hoping for a nibble of the peanuts I’ve been snacking on. She stares with those big brown eyes, tail wagging expectantly.

“Okay, ” I tell her, and she uses her tiny front teeth to wriggle the peanuts from between my fingers. I give her two. She wants more. I eventually ignore her long enough that she lies down behind me. I know without looking because I hear the thud of her body and the clank of her collar on the floor. She doesn’t even bother walking to her bed in front of the fireplace today. I have about five minutes before she’ll be back for more.

How much should the writer tell?

Though descriptive and amusing, the paragraphs above provide a limited picture about the office where I write. Yes, I have a wonderful desk in front of a large bank of windows, but the backyard I gaze upon is covered in dog poo because it’s been too cold to pick it up. (And that’ll be our little secret, okay?) I love the coziness of having a fireplace and built-in bookshelves in my office, though I rarely mention how drafty and dark it can be, and the sunlight that floats in and settles on my desk usually does lift my spirit, if it’s not blinding me from beneath the shades.

Most of the time, stopping midsentence to pet Tilly’s belly or open the back door for her so she can chase the squirrels does provide a much-needed break. Other times, I huff loudly at her and tell her to stop bugging me. And I often just forget to mention that my husband is sitting at my back, working from home at his own desk one day a week.

But investing in a high-end pooper scooper or taking roll call here in the office or going to great lengths to inventory the furniture and catalog the weather still won’t resolve the issue that every time a writer sits down to write, there are parts of the setting and the story that she will include and there are parts she will not—whether fiction or nonfiction. The things emphasized and the things disguised contribute to the greater good of what’s written. The author, who judges and evaluates and makes those decisions, must hope that in the end that readers will understand the difference.

In her Atlantic essay The Thoreau of the Suburbs,  Diana Saverin discusses Annie Dillard’s Pilgrim at Tinker Creek. Though the book sits firmly in the male-dominated wilderness literature genre, Dillard’s experiences in the woods were not of the woman vs. nature, lone wolf living off the land variety.

“She wasn’t a man living alone in the wild, ” Saverin writes. “In fact, she wasn’t even living alone. She was residing in an ordinary house with a husband–her former college poetry professor, Richard Dillard.”

The events of the book did take place in Dillard’s life, they just happened to be lived out in her suburban Virginia neighborhood. She did spend time alone walking through the woods that include Tinker Creek, journaling and chronicling the animals and natural phenomena she witnessed and pondered. She just happened to go home in the evening to her husband and their red brick house, and she just happened to play softball and attend faculty parties on the weekends. As it happened, she decided not to include those facts.

“One thing Dillard knew—but many of her potential readers didn’t—was that there had always been a certain amount of delusion involved in the lone-man-in-the-wilderness narrative, ” Saverin writes. For instance, researchers widely acknowledge that Henry David Thoreau, one of America’s early wilderness writers, regularly walked to nearby Concord and may have even had dinner at his mother’s house while living at Walden.

But that didn’t deter Dillard from wanting to tell the truth. “Later, Dillard emphasized that a nonfiction writer has an unwritten pact with the reader: that the writer is telling the truth. ‘Walden, shaped as it was, ’ she added, ‘nevertheless told the truth.’”

Which leaves Saverin wondering: “If the author conveys a resonant truth, does it matter what experiences led to the realizations?”

Memory can be so slippery

Of course, the path of fact versus truth contains all kinds of stopping off points, primarily for the nonfiction writer, but really for all writers.

For instance, I got rid of my copy of A Million Little Pieces without even reading it when I saw James Frey admit to Oprah that he, at best, exaggerated and, at worst, fabricated the story. But maybe I also should mention that I didn’t actually own a copy of the book; it was a loaner that I never returned. Also, I can’t remember for sure if I saw Frey’s admission on Oprah or somewhere else. A quick Google search confirms that Oprah did indeed host such an episode with the confession. But whether I saw the show live or in clips later I’m not sure.

Does knowing these extra details make the truth of my aversion clearer or not? Should I avoid writing about things I don’t remember fully? And even the things I do remember fully: should I still fact check myself? Memory can be so slippery.

The questions keep coming: Is making something up worse than omitting something that did happen? Does consolidating days or combining characters amount to fabrication? Does it matter if the fraud was intentional? Is negligence better or worse?

And just to clarify, could this whole issue be resolved by just admitting that we all do it sometimes?

Writing the world into existence

Then again, every literary artifact is imbued with a little deceit, limited by the singular perspective of the writer. We write into existence the world that we need to explain the truth that we believe. Like Emily Dickinson’s “Tell all the truth but tell it slant, ” we know that writing all that’s real might blind our readers or bore them to tears or gross them out beyond expectation (like did I really need to mention the built-in bookshelves or the overlooked dog poo?).

We also have come to expect that much of what we see and hear in the media and entertainment world is not the whole story. From Brian Williams’ six-month suspension to the spurious facts of the recent blockbuster American Sniper to the cleanshaven members of the Duck Dynasty gang who began growing their beards only when they received a contract with A&E, we have learned to question what we see and hear.

But when it comes to what we read and what we write, especially what we call nonfiction, there seems to be a higher standard—to tell the truth, whatever that happens to mean.

Photo by the glasseyes view,  Creative Commons license via Flickr. Post by Charity Singleton Craig,  co-author of On Being a Writer: 12 Simple Habits for a Writing Life that Lasts.

Read a poem a day. Become a better writer.