For the first 31 years of my life, the closest I ever came to the Great Plains was 37, 000 feet above, as I flew over the patchwork of fields and farms toward my final destination. When I moved from New England to Nebraska nearly fourteen years ago, my expectations of what I’d find were based entirely on stereotypes: the easy-going Midwesterner—corn-fed, robust, salt of the earth; combines slicing through a sea of grain; acres of cornstalks whispering in the breeze. I envisioned myself as an aproned Meryl Streep straight out of the Bridges of Madison County, setting a piping hot apple pie on the porch rail.

As it turned out, my expectations couldn’t have been farther from reality. Nebraska, with its wide sky, stark landscape and relentless winds, was not what I had imagined at all. For a long time, I couldn’t quite figure out where I fit amid all the space. I was recently reminded of my early days in Nebraska and that vast chasm between my expectations and reality when I visited the Joslyn Art Museum in Omaha. Although the museum is home to more than 11, 000 works, including Renaissance and Baroque masterworks by Titian, El Greco and Veronese; Impressionist masterpieces by Camille Pissarro, Auguste Renoir, and Claude Monet; towering blown glass sculptures by Dale Chihuly, and even a recently restored Rembrandt, it was the pieces that captured the people and places of the Midwest and the West that most captivated me.

As my husband and I strolled into one of the galleries, I laughed when I caught a glimpse of one of the most celebrated paintings in the Joslyn collection: Grant Wood’s Stone City, Iowa.

“This is a bit how I imagined Nebraska before we moved here, ” I said to Brad, pointing at the Seussian trees, quaint steeple and Rubenesque hills.

Wood’s idyllic rendering of the small-town rural America was intentional, offering a comforting pastoral ideal to a nation struggling through the Great Depression. But as I gazed at the painting, I wondered if idealized portrayals like Wood’s had, at least in part, informed my fantastical notion of the Midwest. Stone City, Iowa stood in sharp contrast to the landscape I had captured with my point-and-shoot camera not long after I first arrived in Nebraska. My own snapshot of a rural Nebraska road near Lincoln

As I strolled through a gallery featuring the Joslyn’s internationally recognized collection of artworks depicting the American West, I pondered the artist’s power to shape and influence a viewer’s understanding of a particular place or people. I was struck, for instance, by romanticized depictions of both the landscape and the Native American people by artists including Frederic Remington, N.C. Wyeth and Eanger Irving Couse.

“Painters created an image of the West as a rough-hewn paradise of rugged landscapes and daring action, ” the gallery text explained. “This vision—equal parts fact, myth and nostalgia—continues to stalk us in movies, advertisements and in our own imaginations, even as we acknowledge the complexity and contradictions of the West.” 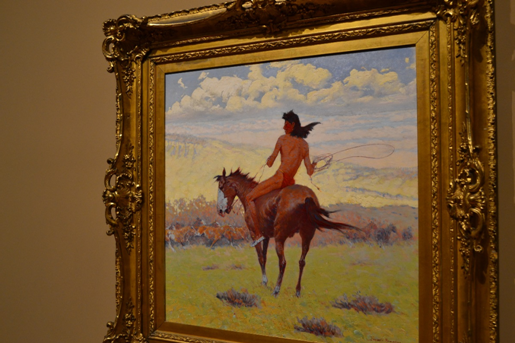 A few steps away in an adjacent gallery, I stopped in front of a selection of formal portraits depicting Native Americans. The accompanying signage explained that these paintings were among hundreds produced over three decades, beginning in the 1820s, when Plains Indians were brought to Washington D.C. on diplomatic missions. Thomas L. McKenney, superintendent of Indian Affairs, commissioned artists to paint portraits of the visiting chiefs with an eye toward creating a National Indian Gallery. The gallery was never constructed, but it’s worth considering the impact of these portraits, not only on the white men and women who viewed them, but on the Native Americans who sat for the artists as well. One can’t help but notice the Anglicized features of the Native Americans portrayed in these commissioned paintings, especially as compared to the sketches by Swiss artist Karl Bodmer displayed on the opposite end of the gallery.

The Joslyn is home to the largest collection of works by Bodmer, who was hired in 1832 by the German explorer and naturalist Prince Maximilian Wied-Neuwied to document his expedition to the American West. The two traveled 2, 500 miles by steam- and keelboat up the Missouri River as far as present-day Montana. They wintered at Fort Clark, near the Mandan villages, and then continued downriver in the spring. Bodmer’s portraits were the first accurate portrayals of western Native Americans in their own environment. Maximilian’s three volumes of journals, which were published in 2008, 2009 and 2001, along with his collection of 350 of Bodmer’s watercolors and drawings, are the centerpiece of the Joslyn collection. A page from one of Prince Maximilian Wied-Neuwied’s journals, 1832-1834

Although Bodmer’s watercolors and sketches were not hung directly next to the portraits that had been commissioned by the federal government, the contrast was obvious. One exhibit of paintings depicted the Native Americans as the white men preferred to see them (or the way the white men preferred they be seen by viewers); the other as they actually were.

On the hour-long drive home from Omaha to Lincoln, I gazed out the window at the shorn fields unfurling along I-80. Nebraska’s barren landscape wasn’t what I had expected when I first moved here almost fifteen years ago. The vast land and the seemingly endless sky were unfamiliar and unsettling to me. Over time, though, I’ve found beauty in the spaciousness of this place. There’s room to breathe here and a quiet slowness I didn’t anticipate. So much of what I’ve come to love about Nebraska I discovered simply by living in its landscape.