The shortest distance between two points is supposed to be a straight line. And I suppose that’s important where efficiency is concerned. When I recently drove from the middle of the country to the West Coast, and had a mere three days to do it, efficiency was concerned. But Day 2, the middle leg of the trip,  was the short driving day, with a target of just a little over 500 miles. This afforded me a small measure of flexibility so that when a rest area appeared less than a half hour from the Utah-Nevada border, I took it.

I didn’t need to stop. I’d be able to stretch my legs soon enough when I arrived in Wendover. But I went for the curve, not the straight line.

I’d been fascinated for the last hundred miles since passing the Great Salt Lake with the light covered crust over the soil in the median and beyond the highway shoulder. Occasionally a teenager might have expressed his (or her) love for a darling in a heart shape made of dark clumps of dirt contrasted against the salt-coated earth. It was still daylight on a hot August afternoon. The sky was clear. I pulled off. With my shoes and socks in hand, I crossed the hot salty beach and stepped into the cool water and took in the Silver Island Mountains across the salt flats, a color of blue I’m still not sure actually exists. I took pictures. I knew they wouldn’t do it justice.

Before I went back to the car, I bent down and scooped up a handful of salt crystals from the shallow water, checking around me to make sure I wasn’t going to be arrested for removing part of the landscape. On the way back east a few months later, I toyed with the law again, as the rest stop is not accessible from the eastbound lanes of the highway without making an illegal U-turn. I imagined I’d stretch out my arm toward the mountain ridge and tell the sheriff, “It was worth it. Go ahead and take me in. Every minute I was illegally parked on the shoulder was worth it.” (Actually, I was contemplating how much my insurance rates would go up because of the traffic citation I was sure to get.) As I drove toward Salt Lake City, checking my rearview mirror for the inevitable arrival of law enforcement, I looked out the driver’s window and was certain that the water surrounding the mountains was running just the slightest bit uphill. A sort of salt flats mirage, I told myself, still mildly convinced that the mountains were somehow suspended in air with the shallow water pulling up to their base.

I’d learn later this was likely no mirage. The salt flats in Utah are the result of the drying up of ancient Lake Bonneville in the Pleistocene era, creating this concentration of mineral deposits. With their smooth, flat surface stretching a good 30, 000 acres, this is one of the few places in the world where a person can actually see the curvature of the earth.

There are things in the world, I think, that are so beautiful the human mind doesn’t know what to do with them. Curves can sometimes be that way. The best the mind can figure is that water runs uphill, and the rest—well, the rest we chalk up to optical illusion. (If you make it to the Bonneville Salt Flats, you may as well make the extra 100 miles east and stop at Salt Lake, itself a massive remnant of Lake Bonneville.) 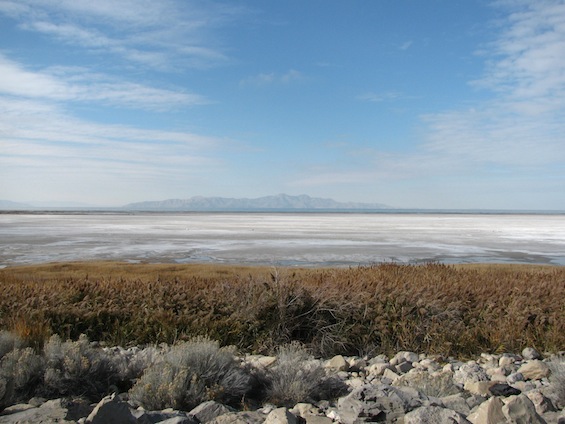 Dip into poetry every weekday morning with a subscription to Every Day Poems and find some beauty in your inbox.