The other day I drove past Facebook’s location in Menlo Park. Somehow, I’d expected the campus to be a single, sleek blue and silver building (with a single, well-placed thumbs-up mounted on the top), not the colorful city in miniature tucked into the rare open space in Silicon Valley it turned out to be. I believed, at least for a moment or two, that real people worked in the buildings, not just well-dressed bots churning out new algorithms week after week. Such a humanizing belief is reinforced by the fellow guests passing through the house where I’m staying, often from other tech firms like Evernote and Oracle. I strategized every day for a week when the woman from Google stayed in the room next to mine, finally taking my best shot when our schedules crossed in the kitchen one night.

“I’ll share my black beans and rice with you if you’ll open the secrets of the search algorithm to me, ” I said. “And I have chocolate in the fridge. Dark. From Trader Joe’s.” (I didn’t actually offer my dinner or my chocolate. What I really said was much less interesting.)

Damn, I thought. And she’s a nice human, too.

We have no top secret algorithms here at Tweetspeak. (Though we’ll happily come up with some secrets to share in exchange for dark chocolate.) But through a process that’s one part data, one part intuition, one part special sauce, we’ve gathered what seem to be the 10 most popular posts in the Tweetspeak archives (from all time). Whenever I look through the archives I marvel at the remarkable writers assembled here and the richness of the articles they’ve contributed.

Maybe you have a favorite post from the archives? Let us know in the comments.

“The word choices are as intense as the images, unique and unexpected in a fashion, and again full of the juxtaposition and shifting nature that pervades the entire poem. “[D]reaming evil” the “lonely thing [is] twelve-fingered, out of mind.” The “warm caves in the woods, ” the “rearranging [of] the disaligned, ” the surprise choice of words with which to pair, the way she “waved … nude arms at villagers going by” which only hints at answers, but brings the mind to question.” Read student writer Sara Barkat’s poem analysis of Anne Sexton’s “Her Kind.” “Adrienne Rich uses an observational, detached tone in “Diving into the Wreck” to write a detailed poem that focuses on humanity; storytellers as observers, recorders, and explorers; and the isolation of life; as well as the shared community found through the experience of story, through the mythical inner journey of the writer who makes such things possible.” Read student writer Sara Barkat’s poem analysis of Adrienne Rich’s “Diving into the Wreck.”

4. Ghazal Poetry: How to Write a Ghazal & Playlist

“Ghazal poetry is poetry of longing. Traditionally, the ghazal tended to focus on unattainable love, often illicit, or sometimes on metaphysical questions. But, today, the ghazal has broadened to touch many types of longing and loss, as in the friendship poem ‘Mortal Ghazal, ‘ by Luisa A. Igloria.” Listen to this beautiful ghazal playlist while L.L. Barkat teaches you how to write your own ghazal poems.

5. Simple Tips on Finding and Working With a Book Publicist 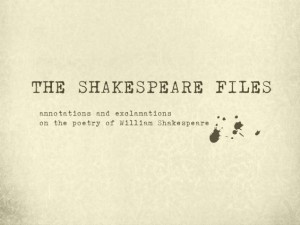 Discover the oft-overlooked Sonnet Matrix: the fictional way a certain poet characterizes a complex array of lines making up the traditional Shakespearean sonnet,  written in iambic pentameter and comprised of three four-line stanzas which rhyme in the required manner and ending with a rhyming, but not necessarily negative, couplet. Read the Shakespeare Files: Sonnet 116 (Annotated).

“This is perhaps the most famous of Shakespeare’s sonnets, made so because it is often taken as a loving monument to the beauty of the speaker’s beloved. After all, the beloved here is compared to one of the loveliest of things—a summer’s day—and comes out the winner for she is deemed “more lovely and more temperate” than that harsh, changing, and ever-declining season. Indeed, the poet says, the beloved’s brightness is “eternal” and “shall not fade.” What more powerful expression of love could there be than this, the steadfast belief in a lover’s eternal beauty and grace.” Enter Karen Swallow Prior’s Poetry Classroom for a lively discussion of Shakespeare’s Sonnet 18. I brought my poet Barbie.They’re smart enough for poetry?Barbies is an interesting topic.I want to stay but I need to go.But If you leave, who’ll representKen? I’ve never been comparedto Ken before.

Read more Barbie poems from one of our earliest Twitter poetry parties.

9. The Swing: A Children’s Poem on the Playground

“Ten years I’ve been doing this: coming to the park, pushing my babies and toddlers and kids on the swings, underdogging them, reciting silly poems, and watching their faces flash past, all joy in the safe freefall of the swing.” Read Kimberlee Conway Ireton’s experience reciting poems with her children on the playground.

10. How to Write a Catalog Poem (with or without words) “The steady crescendo of cataloging,  when done well, does not so much call attention to itself as it creates an inner sensation of power— like the waves of the sea ever-gathering towards shore, saying, ‘I am here, I was here yesterday, I will be here tomorrow.'” Learn about the power of the catalog poem, and how to write one.

The funny thing that happens when you concoct your own algorithm is that the results can sometimes be unpredictable, like getting 11 posts when you asked for 10. Here’s our bonus #11 post, just for good measure:

“Li Bai, as his poems often suggest, loved both wine and friends, and fittingly, the most famous poetic friendship in Chinese literature commenced when Li Bai met the younger poet Du Fu in a out-of-the-way wine shop. Although declining in health, he continued to travel during the last years of his life. Legend has it that he drowned when he was in a boat one night, and was determined to embrace the moon that he saw reflected in the waters.” Discover the work of Li Bai, and understand how “Traveling is hard!” in our very first Poetry Classroom post with professor Brett Foster.