Tweetspeak’s virtual Literary Tours take us to destinations of all kinds, finding inspiration in places such as art museums, libraries, and natural settings. Immerse yourself in Willa Cather’s childhood with a stop in Red Cloud, Nebraska.

As the wagon lurched over the rutted dirt, Willa Cather knew one thing for sure: she had no interest in living on the Great Plains.

Born in Virginia, nine-year-old Willa initially found Nebraska’s wide sky and endless landscape almost physically crushing. “As we drove further and further out into the country, ” she said, “I felt a good deal as if we had come to the end of everything—it was a kind of erasure of personality.” It was April 1883. The land, Cather later recalled, was “as bare as a piece of sheet iron.” The family planned to join Willa’s paternal grandparents on their homestead about a dozen miles outside the town of Red Cloud.

Less than 18 months after they arrived, her father decided he wasn’t cut out for farming and moved the family into a modest rental home in town. Willa Cather lived in this two-story, three-bedroom house with no running water and no electricity along with her maternal grandmother, her parents, her six siblings and their hired kitchen girl—all eleven under one roof. Cather stayed in that home into her young adulthood.

I recently visited Willa Cather’s childhood home with my book club. We’d read My Antonia and O Pioneers, and knowing the Pulitzer-Prize-winning author’s childhood home was less than a three-hour drive southwest of Lincoln, Nebraska, we decided to visit the setting in which Cather had set so many of her novels and stories.

We arrived in downtown Red Cloud, population 1, 200, on a scorching August afternoon. The town was eerily quiet. A hot wind blew across the plains and down the red-bricked streets, kicking up dust and whipping our hair into our eyes.

Our tour began at the Red Cloud Opera House, where Willa Cather gave her graduation oration in 1890. The Opera House is now home to the Willa Cather Foundation, which houses a number of Cather’s artifacts, including several of her dresses, her traveling trunk, and the family Bible, in which Cather changed her birthdate from 1873 to 1876 and her name from Wilella to Willa.

In a futile attempt to beat the heat, our tour guide, Carol, suggested we drive from spot to spot along the tour, so the six of us clambered out of my minivan in front of 241 North Cedar Street, Cather’s childhood home. As we crowded into the front hallway, Carol explained that the Cather children were not allowed into the sitting room, dining room or master bedroom. All seven of the Cather children were restricted to the kitchen and grandmother’s room. The oldest children, including Willa, slept in the attic. 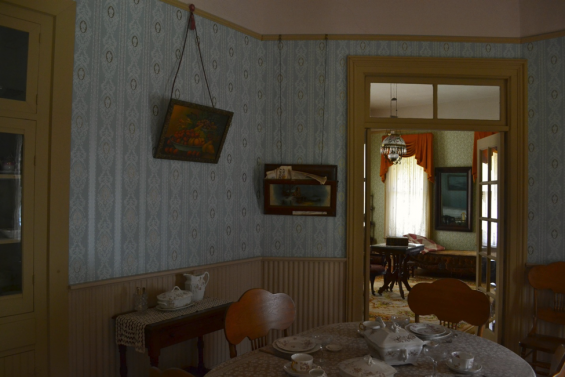 We climbed the steep, narrow staircase into the dim, stifling attic. As the oldest, Willa had her own room, a small, sparse space brightened by natural light streaming through a surprisingly large window. The floral wallpaper, now peeling and yellowed, is the original paper Willa and a friend hung when they were teenagers.

As I stood at the threshold of her bedroom, sweat trickling down my back, I tried to imagine sleeping in such oppressive heat. On the hottest nights, Carol told us, Willa and her siblings would fight to sleep in the hammocks that hung on the front porch beneath the bittersweet vine. Cather didn’t write her novels until long after she’d left Red Cloud and settled in New York City, but this simple bedroom played a prominent role in The Song of the Lark, in which the fictional protagonist Thea Kronberg daydreamed about her future and watched life rush by from this attic window. In fact, many of the tour’s highlights are woven into Cather’s fiction, including what’s known as The Harling House, which served as the backdrop for My Antonia. Annie Pavelka, who worked as a “kitchen girl” for the owners of the home, was Cather’s best friend and served as the prototype for Antonia. Although Cather didn’t live long in Red Cloud—after graduating from high school she moved to Lincoln to attend the University of Nebraska, and then relocated to Pittsburgh and later to New York City—she returned frequently to visit her family at what’s now known as Cather Second Home, a stately Victorian set on a quiet street two blocks from the center of town. Cather Second Home operates as a bed and breakfast of sorts (it’s bring-your-own-breakfast). I stayed in “Frankfort, ” the room Willa Cather slept in when she was in town, and was half-hopeful, half-leery Willa’s ghost would visit during the night (she didn’t). The morning of our departure, I awoke early, crept down the creaking grand staircase, and took my coffee out to the wide, wraparound front porch. The neighborhood was quiet and still, and as I tucked my legs onto the cheery yellow cushions, I recalled Cather’s words about Nebraska and its impact on her writing. “I think that most of the basic material a writer works with is acquired before the age of fifteen, ” she said. “That’s the important period: when one’s not writing. Those years determine whether one’s work will be poor and thin or rich and fine.”

Willa Cather’s years in that small town, settled amid the wide land and sky, made for a body of literary work that is rich and fine indeed.