It’s no coincidence, I think, that ice cream treats often come on simple sticks. The chocolate dipped ice cream bar, the dreamy orange creamsicle, even the minimalist (and dairy-free) sweetness of a bright red cherry popsicle, if that’s your way. And, I don’t think it’s by mistake that one of the earliest fellows to drive an ice cream truck was called the Good Humor Man.

In my business (insurance), it’s often said that we sell peace of mind. A promise. That sounds much more appealing than a contract, a piece of paper that might not be seen as worth more than the ink that’s printed on it. It’s hard to imagine a way to sell ice cream that makes it sound even better than ice cream, but think back to the days when the ice cream truck used to meander down our streets. When we heard the music, we jumped off our bikes, let go of kite strings, stopped stirring the mud pies and ran for the truck, a nickel and a couple of dimes jingling against each other in our pockets. Even if there was already ice cream in the freezer, it wasn’t the same. Ice cream from the truck tasted better because the ice cream truck offered more than a frozen treat: The ice cream truck peddled happiness. Good humor, if you will.

In its earliest iteration, the ice cream truck brought frozen happiness to doorsteps in a day when the typical home did not have refrigeration. They made ice cream accessible—by putting it on a stick and driving to and fro delivering it.

Take Your Poet to Work Day? On the surface I suppose it might look like a big organization driving a music box on wheels, peddling poets on a stick all around the world for people to take to work. But at its heart, it’s about access. To the past, to yet-unimagined futures, to connections with famous poets or to each other (over the topic of poetry and poems and poets). We know this. On Take Your Poet to Work Day, we saw conversations between friends and colleagues; we saw a post of a heart broken through a Gaza wall that someone labeled with the hashtag #poettowork; we saw people posting links to poems at Poetry Foundation, The Writer’s Almanac, Poem Hunter, Poets.org; we saw imagination at work. And it’s imagination, ultimately, that allows a person like Maya Angelou to reinvent herself, that allows Mary Ruefle to write like Mary Ruefle,  that turns a skyline into a “patient etherized upon a table, “ and that brings a patient back to health.

Poetry access. That’s what we’re about. That’s what Take Your Poet to Work Day is about. And that is a life-changingly subversive thing, even if, at first blush, it looks like a poet on a stick.

But don’t just take our word for it. Take a look at this small sampling of the day’s celebration, beginning with the care folks took with their preparations:

They found all manner of ways to get to work:

Adrienne Rich insisted on driving- I reached the pedals and we landed safely at the grocery. #PoetToWork pic.twitter.com/bdAsTEONKY — Donna Z Falcone (@BrighterSideBlg) July 16, 2014

Especially early in the day, poets insist on their beverages:

@tspoetry: Christina Rosetti hanging out at water cooler like so many Victorian poets were wont to do #PoetToWork pic.twitter.com/zTz7RCirZ1 — Nancy Franson (@nancyfranson) July 16, 2014

Looks like the famous poets are drinking lots of coffee. No tea drinkers? #poettowork @tspoetry — Journal of the Month (@JournalMonth) July 16, 2014

They spent a lot of time next to the computer, maybe wishing for a turn at the keyboard:

“I saw the best minds of my generation destroyed by madness…” #Ginsberg #PoetToWork @tspoetry pic.twitter.com/kBb9tebchC — The Clarence Hotel (@TheClarence) July 16, 2014

The metrical chatter in this office must have been deafening.

Some offered encouragement to a beleaguered worker, as in Langston Hughes’ reminder to “Don’t suck today.”

For #TakeYourPoetToWorkDay, I took Christina Rosetti. Mr Bill did NOT like sharing his mug with her. At all. pic.twitter.com/1taMsAumD9 — Mary Pierce (@momeraths) July 17, 2014

They looked for themselves, sometimes finding, and sometimes not.

Some poets just didn’t quite know what to do with themselves.

Others found a place away from the crowd.

Some workers found ways to bring their poets without needing the sticks:

It’s lame, I know, but we don’t have a printer. Good thing Seamus is under my lamp. #TakeYourPoetToWorkDay pic.twitter.com/omfSYBsrLm — Jennifer Strange (@strangejkp) July 16, 2014

Because live poets may not really like being on sticks:

Sylvia Plath rivaled Emily Dickinson for popularity this year, and brought along all the anticipated drama:

But that doesn’t mean Emily wasn’t in and around, up to her usual solitary antics:

I know too much E. Dickinson trivia to not have done this as part of #PoetToWork Day. #reclusivebread #litgeek pic.twitter.com/QlHGZA1Xdn

“Worked” at the golf course:

Tried to join the circus:

And when it was done, once again, settled in softly with an old friend.

We’re with you, Laura Bushinksi and National Student Poets. We love this day. 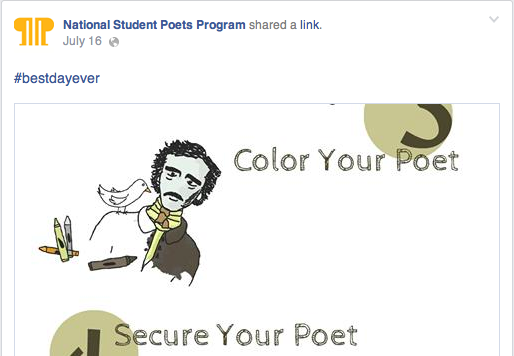 How did you spend Take Your Poet to Work Day? We want to know. If you write something up that’s a good fit, we might even ask your permission to reprint. Like this, from Callie Feyen.

Our Take Your Poet to Work Day coloring book is made for anyone who appreciates a little smart fun. Okay, so the day is past, but you can still print out the book and find a smile. 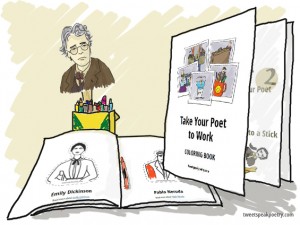