Sojourner Ahebee confesses being “completely stupefied and amazed” that she had been chosen for the National Student Poets Program’s second annual class of honorees. “I screamed a little when I opened the envelope with the selection results, ” she admits. One of just five American high school students singled out from among national medalists of the Scholastic Art & Writing Awards,  Sojourner, representing the Midwest, has spent the last year as a “literary ambassador” for America. Last week, in part 1 of our interview, she talked about poetry as remembering what is left behind. Today, she talks about the “high points” of that experience and what she has learned about the value of poetry.

Poetry Is Critical to Memory

Part of a “strong community of passionate writers” at Interlochen Arts Academy,  Interlochen, Michigan, Sojourner Ahebee says she “was always pushed to submit to as many writing competitions as possible.” A creative writing major who also studies history, anthropology, and the French language, Sojourner submitted work to the Scholastic competition in each of the three years she spent at Interlochen. Though she says the awards program “was just another means of letting go of my writing and letting it take me places, ” Sojourner also declares her 2013-2014 experience “life-changing”. “I am forever indebted to the program for making my biggest dreams a reality.”

As a National Student Poet, Sojourner has had “a lot of wonderful and exciting things” come her way. “For starters, ” she says, “I was lucky enough to have been invited to the White House, by Michelle Obama herself.” There, she took part in a poetry reading for Begum Kalsoom Nawaz Sharif, wife of the prime minister of Pakistan, Mian Muhammad Nawaz Sharif. In addition, she read alongside Billy Collins, a poet she is “very much intrigued by.” Calling it “quite humbling to be in such company, ” Sojourner adds that she’s “really enjoyed getting to know the other National Student Poets.* It’s amazing to see young people, from all over the country, so involved and engaged with the written word. Together, the poets and I have created a close-knit community. I am not exaggerating to say that these four talented individuals really do feel like an extension of my own family.”

During National Poetry Month,  in April, Sojourner took part in Poem in Your Pocket Day. As she and her group “strutted the streets of Cleveland” to hand out poems to pedestrians, Sojourner was “most impressed, and even surprised by, how open strangers were to being given the written word. Seldom did an individual reject our poems, and many were excited to receive one, ” she says, adding, “It was so exhilarating to see the lengths that people would go just for a poem.”

Particularly “inspiring and rewarding” was Sojourner’s service project as a leader of poetry workshops at Culver Meadow Nursing Home,  Traverse, Michigan, where she engaged with residents with Alzheimer’s disease. “I wanted to work specifically” with Alzheimer’s patients, ” Sojourner says, explaining that she had first-hand knowledge of its effects. Alzheimer’s “crippled” her grandmother’s short-term memory during the last decade of her life and “sometimes took the best of her” but she “remembered her poems with the fiercest tenacity until the day she died.” Having seen “how critical” memorization of poetry could be, “how liberating it is to be able to remember, ” Sojourner dedicated her project to her grandmother, “who tried her hardest to never forget her history, her family, and her poems.”

For one activity at the nursing home, Sojourner created a collaborative exercise in which she asked participants specific questions about their first homes and then wrote down on a white board the sensory details they could recall.  From the responses came “a powerful ‘Where I’m From’ poem.” Sojourner considers herself “so lucky to have witnessed this magic in action, ” recalling how the patients “consciously engaged in the act of memory.” Not only were they “forced to come to terms with the limits of memory” but they also “engaged [with] language.” After, during a conversation about the workshop and the role of memory, one resident told Sojourner that “she realized she didn’t want to forget.” It was because of art, and specifically poetry, that “the residents were able to consider their own realities and then have an honest discourse.”

Asked why we should value poetry, Sojourner remarks that poetry lets us look at the world with “a critical and questioning eye. Poetry is our chance to come face to face with truth, with language, with hunger, with confusion, and with beauty.” She adds,

Sojourner, currently “in the very tedious and stressful process of preparing” for college, is not sure how poetry may figure in her future professionally but “I do know, ” she says, “that I’ll continue to write for the rest of my life, and I think that’s enough for now.”

* The other National Student Poets are Michaela Coplen, Nathan Cummings, Aline Dolink, and Louis Lafair. Read Maureen’s interview with Michaela,  Part 1 and Part 2, and Part 1 of her interview with Sojourner.

Watch a video with Sojourner Ahebee and read her poems. Read Sojourner’s poem,  valentine for Sally Hemings,  recently featured by the Academy of American Poets. 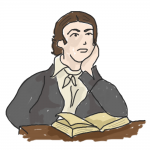 Browse our growing Poets and Poems collection and find work from your favorite and beloved poets—or discover new poets to love.