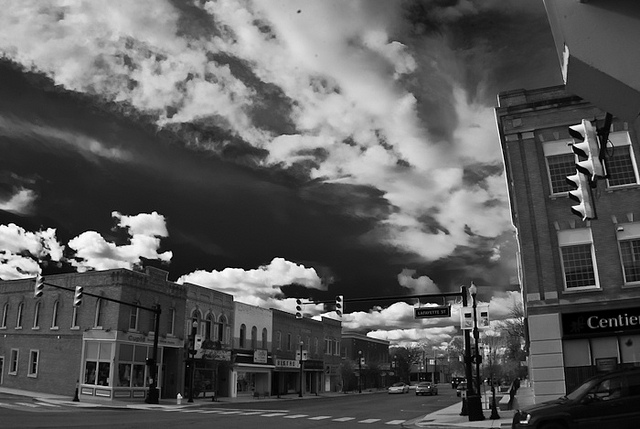 By way of our Memoir Notebook,  we want you to meander, get caught up, find yourself taken to places you hadn’t intended to go (but are so glad, in the end, that you went). You’ll get thoughts on aesthetics, craft, latest issues, tips and books to read. But it will feel like poetic narrative. And sometimes it will simply be poetic narrative. Today,  Wm. Anthony Connolly talks about ghosts and Olympia Café.

I will remember you…

It had been almost two weeks since returning from a late December trip that I finally realized I was back. My body arrived—sick with food poisoning no less—much sooner than my mind. The suitcase was long ago emptied and returned to the garage while apparently I continued to unpack moments and experiences. I hear a song while driving and that’s enough.

I compose a moment: In the dimly-lit basement hallway of my sister’s home, weak with nausea, I stand in a fissure of nightlight briefly listening to the furnace spark and rage against winter; and, I glanced back at my messy benighted and borrowed bed and turned, hugging myself through a shiver, to scan ahead the dark stairs.

The ghost has been to visit me, again. Which way did it go?

And I compose another: It was mid-morning and nearly bitterly cold, but not so unpleasant to keep me indoors. Plus I needed to get out. The introvert in me (pardon the pun) gets claustrophobic from time to time, especially with family no matter how much they are loved. The ten-minute walk took me from my sister’s house, on the eastern outskirts of this small prairie city to the core of downtown. Like I said it wasn’t too cold so I smoked my pipe and ambled along through the frost of memories arising from the sight of various landmarks on my route. One such landmark was a shuttered business—The Olympia Café. It struck me so that I stopped walking, reached into my winter coat and retrieved my iPhone to take a picture. None of this is in any kind of order. The past keeps invading the present and the writer in me keeps an eye upon the future. Which way did it go? Narrative is always being composed in my head as matters unfold. I took notes—as I do with any trip—as best I could, but their significance and bright orders are still being sorted out since they were not dictated in lockstep with my experiences. I take quite some time to process and arrange, but such are the hazards of the memoirist to write things down only to understand the ciphers much, much later. Sifting through my notes after a trip back home is much like fanning out an array of puzzle pieces and slowly working the odd bits into something recognizable.

My small, leather-enclosed, journal has pages and pages of purple-ink code. I write these notes in bed before going to sleep at night as a way of meting out the day. I tend to write and ask questions later. Nothing is too obtuse or bizarre. In these furrowed pages, I have lines about airplanes and delays; about winter and going home; about the delicacy of family. When I returned to the States, while driving I heard a song that triggered something inside me. I stopped at the nearest Starbucks and wrote in yet another journal some kind of narrative. But I was still puzzled.

The Olympia Café has a huge influence on my life. As a young writer, working at the newspaper across the street, I would often go to the café for lunch, which usually consisted of French fries and a grilled cheese sandwich at the counter. And I frequently found myself talking with Connie, one of the two Greek-born brothers who jointly owned The Olympia. I included the café and Connie in one of my first short stories “Kym’s Moment, ” which I later revised and used in my debut novel The Jenny Muck, serving as the novel’s central locale. The Olympia is always open in my work, never closed or shuttered and it remains so in my upcoming novel The Smallest Universe. And now, here, it was utterly closed.

In late December being in my sister’s home where my father lives now, means seeing a house filled with Christmas. It was my mom’s season. No one loved Christmas more. Gone now almost five years, Christmas’ glitz is joyous but tinged with sadness. Mum died two months after Christmas 2008. She died while I was sleeping. It was two in the morning when my father called to say, “She’s gone.” She died at the Portage General Hospital in our hometown, at the age of 77. It was a long way from where she grew up, and it was a long way from where I awoke, rolled over and picked up the receiver. The immediate cause was lung cancer, but also emphysema.

Her last words to me over the phone weeks before her passing in 2009 were “I love you too son.” I was weeping then, heaving, alone in my office. Dumb. “I always loved you, ” I had said inexplicably, like it had been in doubt. It had been for me only a few weeks since I had surgery on my spine to correct some degenerated discs. I was still recovering and could not fly home to be with her before she died. Our phone call was mostly one-sided—me talking, Mum groaning. Through her moaning, she was able to say goodbye to me. I told her about my favorite memory as she listened. One winter night we sat in one of those café booths watching a parade of people go by, fat snowflakes in the dark nightscape, she had leaned forward and told me something important, but it was a mystery because although I would never forget the moment, I could not remember the words she said.

I don’t remember the moment of her death. It was a telephone, after all. I simply placed it back in its cradle and rolled back over onto the bed. Dyan, my wife, undoubtedly held me. The dogs probably licked at my face. I can only guess. I don’t even remember if I fell back asleep. I might have.

The café booth of my memory with Mum was not in The Olympia Café —this a memoirist must admit. That particular booth was in a hotel lobby further downtown, which had long ago been razed by fire and time. The task for the memoirist is simply to say it as best they can, from what they’ve got: A shiver in the night; the dusty windows of a closed café and some bright orders in the mix of purple ink all pieces of a puzzle.

I wonder about the strength of my heart. It’s taken long to process this—will take longer still, if, finally, ever. I’d written in an unpublished memoir that with every one we meet we leave a piece of ourselves with them, and that only when we take in our lives within the circle and power of others are we complete. Which way did it go? Until then, we find ourselves driving and suddenly remembering how much has been already forgotten. How in the aimless ramble of agitated winter malaise we suddenly find ourselves returning from a journey.

… will you remember me?

Anthony Connolly
A former teacher, Wm. Anthony Connolly is a writer living in Millsboro, Delaware. He's a fan of writing, reading, philosophy, arts, and music—and is also interested in education and coffee.

A former teacher, Wm. Anthony Connolly is a writer living in Millsboro, Delaware. He's a fan of writing, reading, philosophy, arts, and music—and is also interested in education and coffee.