If there has been a day in my life that I haven’t had a book in my hand since I was first able to sound out c-a-t, I don’t remember it. I used to bring them home from the library in my yellow paper route bag—thirty or forty big, fat tomes from the grown-up section—and my mother would scream, “For God’s sake, go out and play with the other kids! People are gonna think you’re crazy!” But if you’ve got to be crazy, then I say book-crazy is the way to be.

Although I was fascinated by the written word and surrounded myself with it at every opportunity, something in me was convinced that the actual becoming of a writer was a thing so sacred, so unattainable, it was an honor to which I could never aspire. So instead of writing, I majored in English at Barnard, and then I owned an antiquarian bookstore at Amsterdam and 118th, and then I took classes on bookbinding and restoration, all the while amassing a huge personal library of rare and wonderful books, like a first printing of The Nursery Alice and a Shakespeare & Co. sixth printing of Ulysses.

When my little indie bookstore went the way of many indie bookstores, I had a plan. I was going to go up the street to CCNY and get an M.A. in Literature. I hadn’t been in school for many years, so I was feeling nervous and thought I’d start with something easy—children’s literature. After all, I’d read a lot of it.

Professor Pam Laskin came in and seemed so nice, I relaxed a little. Then she started explaining the syllabus. It seemed we were not only going to read children’s literature—we were also going to write it. I almost ran out the door.

But as she spoke, something inside me said, “All right—here it is. You’ve been ducking it for years, and now it’s caught up with you. You’re going to stay in this class, and you’re going to write. Yes—even the poetry.”

It was sheer joy, every minute of it. By the end of the semester I was hooked, and I begged Pam to tell me whose class I should take next. She suggested Marilyn Hacker’s, since she knew I enjoyed writing form poetry and thought I should learn about poetic structure from this brilliant writer. Although Marilyn was the least condescending person I’ve ever met, every time she opened her mouth I felt gloriously stupid—there was so much I didn’t know! But, like Harriet the Spy, I’d think, “So what? I can always learn.”

At the end of my second semester, Marilyn Hacker took me by the elbow, marched me down the hall to the English office, and announced to the secretary, “Please change her major to Creative Writing M.F.A. She needs to be in the writing program.”

And that, as they say, was that. Pretty soon I was giving poetry readings, contributing to literary journals, and teaching in the Poetry Outreach Program. Though I was afraid at first to take these risks, they got easier every time.

I’ve built up a considerable oeuvre over the years, including some rather saucy verse renditions of Andersen’s Fairy Tales, a series of children’s poems, a novel called The F.U. Diet that is nearing completion, and a screenplay entitled All I Want for Christmas (co-authored with Margarette Gulinello) that is presently making the rounds.

And, of course, poems. Lots and lots of poems. Each poem is my favorite while I’m writing it. I like form, and playing with form. Usually, the least visible form I’ll use is blank verse, and I’ve even been known to venture giddily into sestinas and ghazals. My thesis was called “The English Major’s Guide to Eating a Hot Fudge Sundae, ” and Marilyn Hacker and Pamela Laskin, my personal fairy godmothers, were the readers. My favorite piece in my thesis? A 479- line completion of Chaucer’s unfinished “The Cook’s Tale.” I wrote it in Middle English, and then did my own modern English translation. Bliss!

Image by Ozyman. Sourced via Flickr. Post by Karen Clark, the Poet in Residence at Library Hotel.

Read a poem a day, become a better poet. In January, we’re exploring the theme Doors and Passageways. 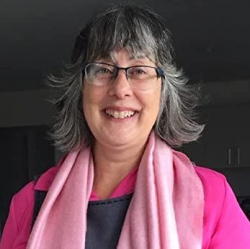 Karen Clarke
Karen Clarke has championed the importance of libraries and literacy throughout her long career in libraries. Her Poetry Notebooks are a collection of poetry and photography to help people meditate on their lives.

Karen Clarke has championed the importance of libraries and literacy throughout her long career in libraries. Her Poetry Notebooks are a collection of poetry and photography to help people meditate on their lives.