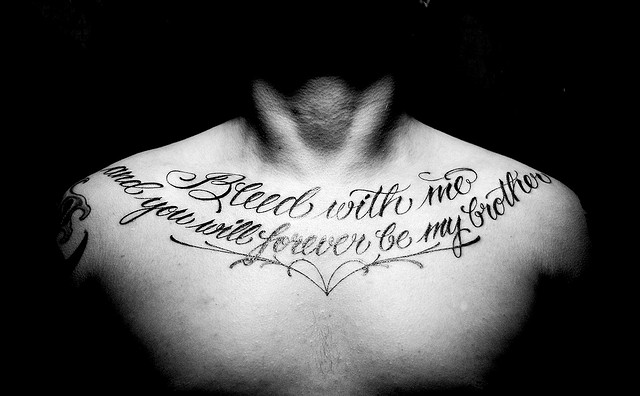 When I finished Kafka’s “The Penal Colony” I had the same queasiness in my belly as in fifth grade when Mr. Peterson read Poe’s “The Pit and the Pendulum” aloud to the class. Heat started around my neck and made the top of the head tingle a little bit; I felt sickened, yet somehow unable to look away. It’s like drinking a toxic cocktail of morbid curiosity and fear. Kafka and Poe both, they have this way.

I only skimmed his tale of the Harrow, a gruesome implement of execution whereby the convicted man’s flesh is inscribed over and over with his “sentence” in an excruciating process I don’t think I care to describe any further. What I did read was sufficient. In a reflection on the short story, Joy Williams says…

Enlightenment is presumed to come in the twelfth hour of the great Harrow’s work when, just at life’s end, the doomed one begins to comprehend the transfiguring justice of his dilemma.

Of course, this reading colored all the others as we wrap up our discussion of Dorothy Parker’s Elbow: Tattoos on Writers, Writers on Tattoos,  making every tale and every poem seem just as dark. And then, some of them were shadows of the tattoo’s dark side plain and simple. Susi Richardson wrote of her brother, remembered after his suicide “the tattoo stamped on Mark’s chest: encircled in red, with a diagonal slash to say no, the four black letters, E-X-I-T.” Or Paul Steinberg’s account of being tattooed in the camps on orders of the SS:

The tattooing took place the following day, in fact, at the hands of the approved expert. We lined up for the last time in alphabetical order. Our series began with 156, 900 and something. Philippe was baptized 157, 090 and I became 157, 239. It was all done with the same needle, a succession of rather deep shots, painful but bearable. (I’ve never experienced unbearable pain. Unless it was last year–and morphine took care of it.) Just my bad luck, my family name started with S, which came right after the Rs. And someone who had a last name beginning with that letter had a hepatitis virus. I was infected along with thirty or forty others who had no antibodies. The epidemic broke out after only a few weeks’ incubation, and I’m probably the only one who survived it.

The tattoo’s dark side having fairly well clouded my mind, I was glad to come Tony Hoagland’s poem, “The News.” Beginning in the third to last stanza, a young man contemplates a tattoo on his shoulder, a tattoo of a rose and a fist. The contrast of the two seemed to lighten the room for me–the strength of the fist (with the necessary force to crush a rose) and the rose’s delicate beauty, “without which / you have no reason to live.”

The big country beat the little country up
like a schoolyard bully,
so an even bigger country stepped in
and knocked it on its ass to make it nice,
which reminds me of my Uncle Bob’s
philosophy of parenting.It’s August, I’m sitting on the porch swing,
touching the sores inside my mouth
with the tip of my tongue, watching the sun
go down in the west like a sinking ship,
from which a flood of stick orange bleeds out.It’s the hour of meatloaf perfume emanating from the houses.
It’s the season of Little League practice
and atonal high school band rehearsals.
You can’t buy a beach umbrella in the stores till next year.
The summer beauty pageants are all over,
and no one I know won the swimsuit competition.

This year illness just flirted with me,
picking me up and putting me down
like a cat with a ball of yarn,
so I walked among the living like a tourist,
and I wore my health uneasily, like a borrowed shirt,
knowing I would probably have to give it back.

And the girl on the radio sings,
You know what I’m talking about. Bawhoop, awhoop.

This year it seems like everyone is getting tattoos—
Great White sharks and Chinese characters,
hummingbirds and musical notes—
but the only tattoo I would want to get
is of a fist and a rose.

But I can’t tell how they will fit together on my shoulder.
If the rose is inside the fist, it will be crushed or hidden;
if the fist is closed, as a fist by definition is,
it cannot reach out to the rose.

Yet the only tattoo I want this year
is of a fist and rose, together.
Fist, that helps you survive.
Rose, without which
you have no reason to live.

— Tony Hoagland,  author of What Narcissism Means to Me

We’re reading Dorothy Parker’s Elbow: Tattoos on Writers, Writers on Tattoos,  a collection of essays, short stories and poems about tattoos this month as part of our September Tattoo theme. This week we wrap up our conversation, considering the tattoo’s dark side. Perhaps you’d share your thoughts, or a poem, with us in the comments.