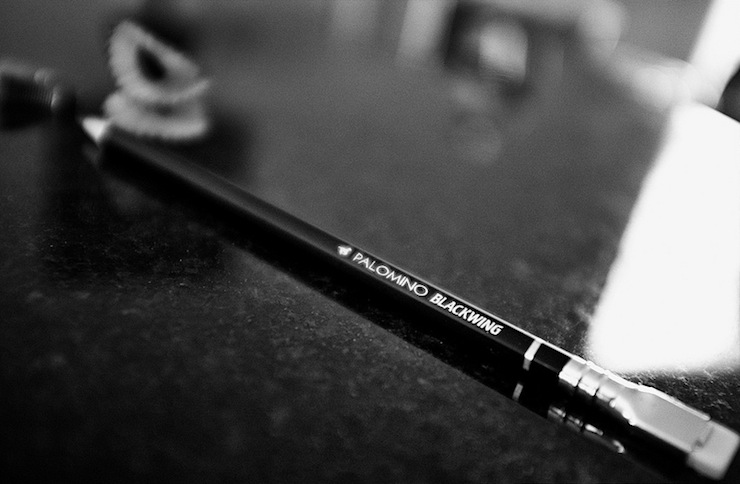 Can Your Pencil Tell You How to Become a Better Writer?

The writing instrument you choose becomes the one to which you whisper secrets. An extension of the muse. The magician’s wand. For some writers, a great deal of thought goes into which pen, or in some cases, which pencil becomes an intimate.

Do you have one? I do. I named it THE, as in, “Hey kid, back off. That’s my THE pencil. You’re gonna ruin the mojo if you keep touching it.” I have a THE pen, too. But perhaps more important than the name of your trusty writing stick is the brand. The brand is the instrument’s pedigree. It has to have that certain something. Alchemy, I guess.

Most of us have our favorites. Some even buy them in great batches for fear of becoming obsolete and disappearing.

Pens are Full of Ink, but the Blackwing is Full of Ideas

Since the 1930’s, the pencil of choice for illustrators, poets, novelists, and musicians would be the highly-fabled, Eberhard Faber Blackwing 602. John Steinbeck reportedly used around 300 of them to complete East of Eden,  asserting the Blackwing was the “best I ever had.” Vladimir Nabokov used note cards and Blackwings to write Lolita. Illustrator Chuck Jones told Larry King that pens were full of ink, but the Blackwing was full of ideas. Now, that’s romance.

Poet Archibald MacLeish was a self-described “pencil man, ” and his pencil of choice was the Blackwing. In Collected Poems he is quoted as writing in a letter to an editor,

Will this do as a manuscript? It doesn’t show corrections, but it shows me as a pencil man and, worse still, a slave to the eraser. (Black Wing pencils have erasers which eradicate as clean as time. As for the lines themselves–they went into a notebook and never came out again because Dylan’s death was too great a loss and George Barker’s piece was too deeply felt to fool with it in a tone like this one. But that’s all in the past now. People die too absolutely these days–disappear like pencil marks to an eraser–black wing.

Then, in 1998, without so much as a tolling of bells, the faithful Blackwing was discontinued. People panicked in the streets and the obsessed began hoarding the coveted pencil. Others would snarl at anyone wishing to borrow one, or worse, have one. Any given day on ebay, one can bid on a single Eberhard-Faber Blackwing 602 original and pay upwards of $50. A box can sell for over a thousand dollars. This is THE pencil, apparently.

Half the Pressure, Twice the Speed

Aficionados claim that it writes like Beyonce sings. The eraser is more elegant and cooler than any ordinary pencil eraser. The layered paint has a shimmery, charcoal finish. It sparkles. Like a bass boat.

Emblazoned on the side: “Half the pressure, twice the speed.”

I don’t even know what that means, but it sounds like my kind of voodoo. Yeah. Twice the speed. Like a bass boat. And I want to be the bass master, or the Bass-O-Matic of writerdom. Something like that.

Recently, dandy pencil manufacturer Palomino recreated the Blackwing, and with it, the return to joy and the stuff of creativity. Need convincing? Watch Ode to Blackwing.

Is Your Pencil Holding You Back from Being a Better Writer?

If so many brilliant writers and artists used this pencil, swore to this pencil, pledged their lives to a pencil… then it has to be THE pencil, right? Sadly, I’ve never tried one. This could be the answer to the nagging question, “Why am I not a famous writer and poet, yet?!”

The Blackwing 602 could get us there.

However, maybe the Blackwing 602 isn’t for you. Perhaps for you, THE writing instrument is the gourmet-scented Smencil, the bendy pen, or the gigantic Dixon-Ticonderoga Junior pencil. It’s cool. No judgement here. I like them, too.

Perhaps all good writing is created by the effort to keep on with pen or pencil in hand, scribbling away, or by the click-click-click of the keyboard. But maybe, just maybe, a little word magic and poetic sorcery lies within the smooth, steely graphite of a legendary pencil.

Read a poem a day, become a better poet. In September, we’re exploring the theme Tattoos.