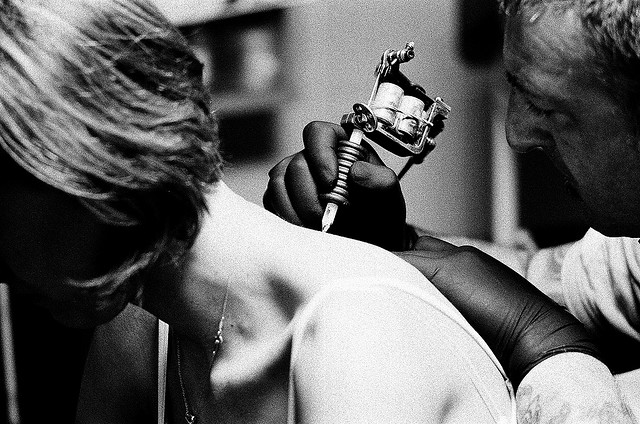 When your kid takes an interest in tattoos

A couple of weeks ago, my son sat cross-legged on the spare bed in my office. We were talking about the sort of things we might be expected to talk about in the days leading up to his departure for college. Dorm life, saying goodbye to friends, finances, funny memories, class schedules.

Without warning, he said, “You’ve got to see this!”

He turned his iPhone toward me and showed me a picture of his friend Tyler’s new tattoo: an exquisite design of a wolf, from just above his pec and over the top of his shoulder. Maybe it was a hawk. Or even a blackbird for all I know. I don’t remember now. I do remember being impressed with the tattoo, telling him it was quite stunning, despite flinching at the red marks that suggested more than a little pain. He assured me that Tyler said it was just a little tender.

He’d never really had much interest in tattoos until he saw Tyler’s, but he felt a tattoo was something he could do. An employer wouldn’t see it under a dress shirt, he told me, and it was positioned where his basketball jersey would cover it during a game. I nodded, looking at his broad shoulders, and agreed. He could pull it off, if he ever wanted to.

Later, I mulled over my lack of even mild concern when my son took an interest in a chest tattoo the very day before he moved out on his own for the first time, and then wondered just when it was that I took an interest in the artistic merits of tattoos at all.

Tell Him How Tattoos are Made

If I were really concerned, I suppose, I could tell my son how tattoos are made. It might slow him down a little, if he were really in a hurry to get his chest inked. (I don’t think he is.)

In Dorothy Parker’s Elbow: Tattoos on Writers, Writers on Tattoos, I read Karol Griffin’s account of learning to tattoo by practicing on grapefruit and bananas.

A tattoo is created by embedding pigment in living skin. The pigment is poked through the epidermis and adheres to cells in the underlying pad of tissue. Tattoo needles are not hollow. They do not inject pigment. Instead, the the needles poke holes in the skin and leave pigment behind. Epidermal tissue heals over the pigment, and the tattoo is visible through a thin layer of scar tissue. Once healed, the tattooed skin feels just like the surrounding skin. It is just as ticklish, just as warm.

And Tell Him Tattoos Last Forever

It’s not exactly like drawing on the back of your hand with a Sharpie pen during math class. I have to admit, I know little about the tattoo process, nor about the tattoo culture. I’m bound to misspeak at some point during our book club discussion on this collection of poems, essays, and short stories on the mystical tattoo. But this much I know: tattoos mean something. Tattoos say something, and tattoos are permanent in ways that transcend the fact that they don’t wash off. Mark Doty writes of permanence in his poem “My Tattoo”

What noun
would you want

spoken on your skin
your whole life through?
I tried to picture what
I’d never want erased

Later in the poem, he writes

It’s too late to be unwritten,
and I’m much too scrawled
to ever be erased.

Go ahead: prick and stipple
and ink me in:
I’ll never be naked again.

As soon as I touched the needles to Rick’s skin, I was tying myself to tattooing for the rest of my life.

And Then Tell Him the Tattoo Better Mean Something

Dot by imperceptible dot, inch by inch, plain skin became permanently marked. Layer after layer, latex like the connecting wall of a dividing cell. On either side, skin–his and mine–and beneath that, muscle and bone, nerve endings and blood. The heat that rose from Rick’s body was markedly more pronounced on the freshly tattooed part, cooler outside the lines. His blood rushing white blood cells to the area of invasion, fighting against what his mind had decided to do; his blood busily transporting excess ink to the nearest lymph node for storage. All this for a picture on the skin. It wouldn’t be worth it if it didn’t mean something more, somewhere else.

This, of course, is the big question. What does the tattoo mean, besides “a picture on the skin”?

We’re reading Dorothy Parker’s Elbow together this month, a collection of poems, essays and short stories reflecting on the subject of tattoos. We read the first several selections this week, including Doty’s poem and Griffin’s story, as well as an excerpt from Ray Bradbury’s “The Illustrated Man” and Alejandro Murguía’s “A Toda Máquina.” For next week, we’ll read from “The Tattoo Hunter” (p. 78) to “It Only Hurts a Little” (p. 140).

Let’s look at Doty’s poem, “My Tattoo.” The complete poem seems to suggest that when he says It’s too late to be unwritten, / and I’m much too scrawled / to ever be erased, he’s speaking before getting the tattoo, suggesting that we can be tattooed without ink. What might that look like?

I thought I wanted to wear
the Sacred Heart, to represent
education through suffering,

how we’re pierced to flame.
But when I cruised
the inkshop’s dragons,

cobalt tigers and eagles
in billowy smokes,
my allegiance wavered.

tempting, but none
of them me. What noun
would you want

spoken on your skin
your whole life through?
I tried to picture what

I made my mind up.
I sat in the waiting room chair.
then something (my nerve?

faith in the guy
with biker boots
and indigo hands?)

wavered. It wasn’t fear;
nothing hurts like grief,
and I’m used to that.

His dreaming needle
was beside the point;
don’t I already bear

the etched and flaring marks
of an inky trade?
What once was skin

has turned to something
made; written and revised
beneath these sleeves:

hearts and banners,
daggers and flowers and names.
I fled. Then I came back again;

isn’t there always
a little more room
on the skin? It’s too late

to be unwritten,
and I’m much too scrawled
to ever be erased.

Go ahead: prick and stipple
and ink me in:
I’ll never be naked again.

From here on out,
I wear the sun,
albeit blue.

If you’re reading along, perhaps you’d share in the comments your thoughts on this poem or any of the other readings. And even if you’re not, you might weigh in on your thoughts about the permanence and meaning of the tattoo.