Step up to the Visitor’s Center’s information counter at Coast Guard Beach and ask  the small, uniformed woman where you might find Henry Beston’s house, and she will reply, “It’s gone, ” and stare back at you with the faintest hint of a smirk, as if to say, “Next question?” Of course you know it’s gone, you tell her. But could she kindly point you in the direction that it once was? She could. And she would. But she might also neglect to mention that it will feel like a day’s walk down the beach and you would be wise not to carry everything you own in the tote bag on your shoulder. She was right, of course. All that is left of writer/naturalist Henry Beston’s beach cottage (the “Fo’castle” as he called it) is, well, nothing. A 1978 hurricane washed the house–the setting for his well known book The Outermost House–out to sea, along with a large portion of the shoreline. A person without a tote bag full of books and shoes and iPads could conceivably walk the day’s journey along the duned coastline to the narrow spit reaching out into the Atlantic and look out into the waters where it once was.

(Those with heavy tote bags might be content to get within sight of the spit where his house once stood.) We don’t find it surprising that Gorey’s cats would be fascinated by cemeteries. They meowed and put up quite a fuss when we drove past the Cove Burying Grounds in Eastham, insisting we turn the car around and go back. Fortunately, we found a small parking area off the highway which saved the more uptight among us the sleepless night that might have followed parking illegally along a private drive. The Cove Burying Grounds holds graves dating back to 1706 and memorials in honor of three Mayflower passengers, including Town Clerk Constance Hopkins Snow, who died in 1677. Several stones were worn down to misshapen stubs, while others, since engraving was likely sold by the letter, held only the letters “M F” or “Baby.” 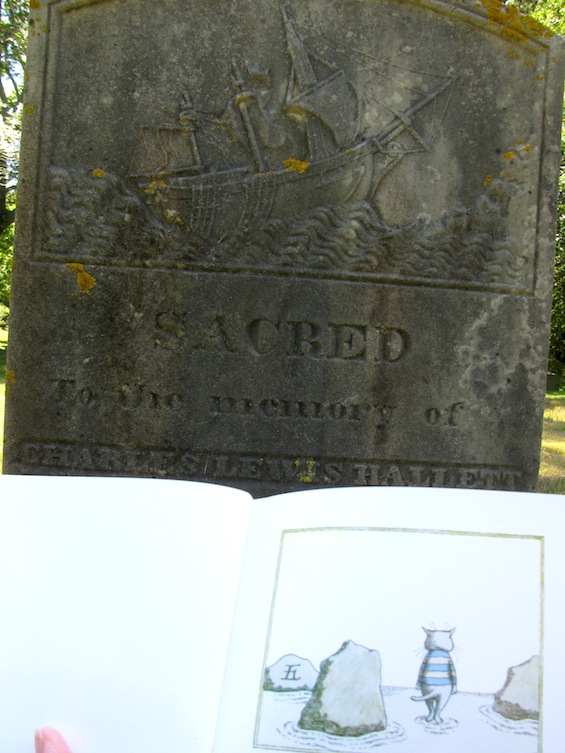 At the Yarmouth Port Woodside Cemetery the cat quietly paid his respects to Charles Lewis Hallett, first officer of the Bark Zamora, killed in a shipwreck while trying to save the others on board the ship. And of course, the cats insisted on a visit to the John F. Kennedy memorial. 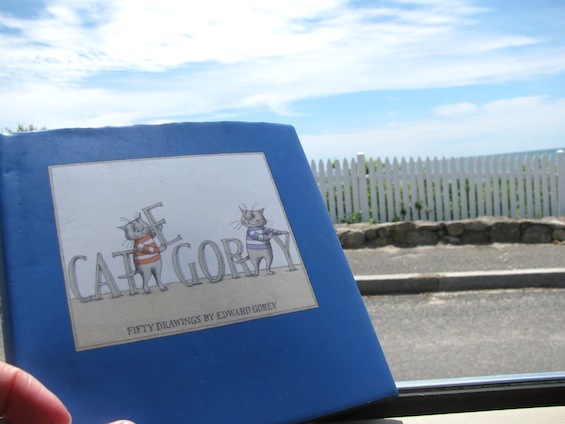 And nosy as cats can be, they also tried to get over the fence for a closer look at the Kennedy compound, even though all the guidebooks were clear that Kennedy-sightings are quite rare. 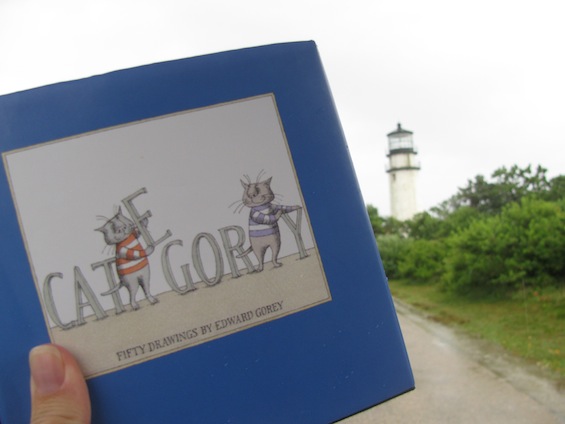 Of the area now known as Cape Cod National Seashore, Henry David Thoreau wrote, “A storm in the fall or winter is the time to visit it; a lighthouse or a fisherman’s hut the true hotel. A man may stand there and put all America behind him.” At the time he said it, it is believed he was standing in a spot which is now about 150 feet or so offshore of the Highland Light. Thoreau also wrote in Cape Cod that he cobbled together some tools to estimate how long the lighthouse could remain before erosion took it too. It’s really too bad Henry Beston didn’t know of Thoreau’s surveying skills or he could have brought him on as a consultant when he had his cottage built, and set it a tad further back. It was not lost on us that our visit to the Highland Light was during a downpour. While we didn’t face the type of storm Thoreau encountered on his Outer Cape walks that led him to take shelter at the light house, it should be noted that a certain person’s red sneakers did get wet walking in a large water puddle. Some might find such a reference to be superfluous, while others would agree it is important to note distinctions between ordinary puddles and those which are large and filled with water. The Gorey cats were delighted to find friends in the animal books section of Parnassus Books. And it doesn’t take a bunch of cats in striped shirts to know that a book store that features an outdoor book service encouraging readers to drop their $1.00 per paperback book through the mail slot on the front door after hours could be a great place to fritter away a lazy afternoon. I don’t know if the Pilgrims brought cats on the ship. And I’m not going to say it was worse than 66 days at sea in the Mayflower. But let’s just say that any cat I know would have turned around and gone home a quarter of the way up the 252-foot tall Pilgrim Monument in Provincetown, with its “leisurely” arrangement of 116 steps and 60 ramps. 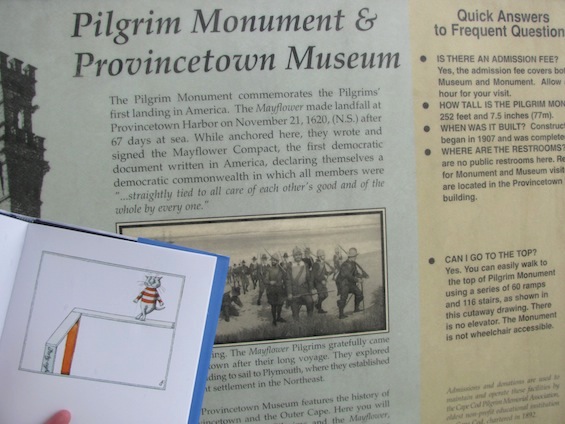 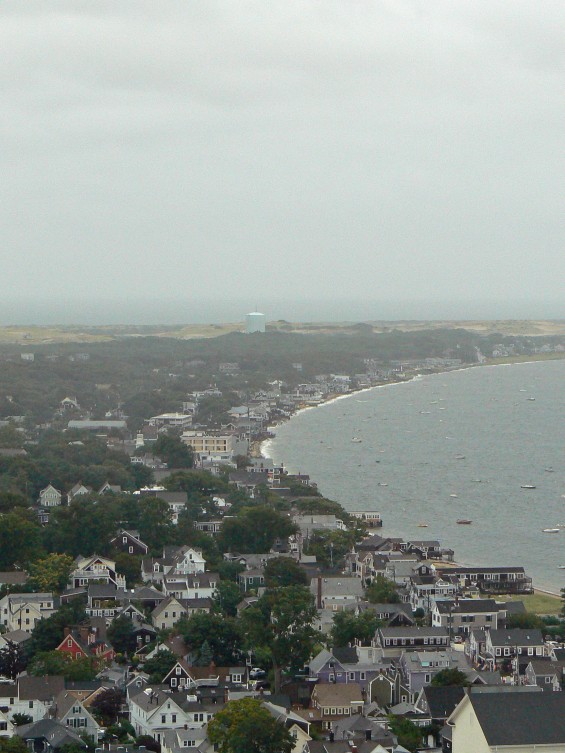 While the weather dampened things a bit, the view from the top of the Pilgrim Monument is spectacular, even through cat eyes. 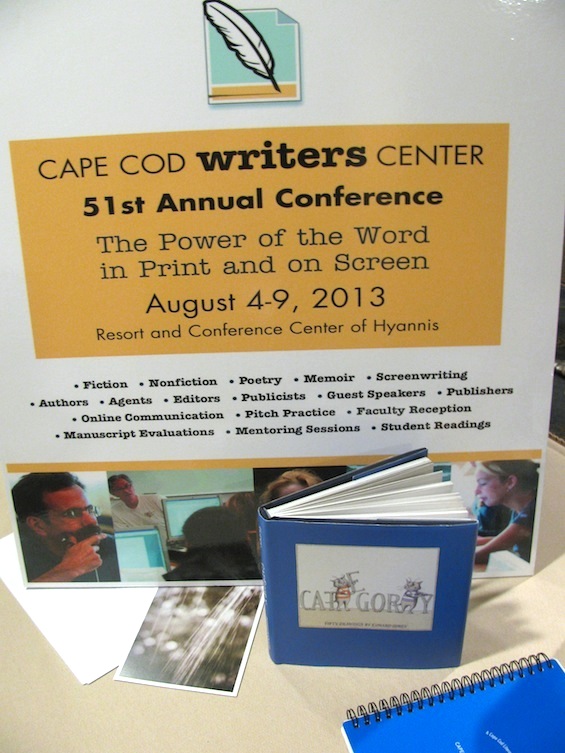 Edward Gorey’s cats made a stop at the Cape Cod Writers Center Conference,  where they received the latest news in publishing and even picked up a few tips on memoir and humor writing. And maybe they also offered a few tips. Cats can be that way. The Gorey cats made a sobering stop at First Encounter Beach in Eastham, the site of the first encounter between the Native Americans and the Pilgrims before they went on to Plymouth. If you stop at the Susan Baker Memorial Museum (and you should), it might not be open. But don’t be deterred. Rumors of her demise sparked by the existence of a “memorial” museum are greatly exaggerated and she is in fact open by appointment. If you ring the bell, she might even answer the door herself and make an appointment for you. We got lucky and stumbled into someone else’s appointment. Baker’s delightful and irreverent artwork is worth the stop. Even if you can only look in the windows. Cats don’t often follow a straight line. In fact, the only time I’ve seen a cat go in a straight line is from the floor to the middle of the dinner table, right smack into the bowl of mashed potatoes. But maybe you prefer to visit the major sites of Cape Cod in some kind of straight (ish) line. You might try this loose suggestion for geographical order of visitation…

Photos by L.L. Barkat, author of The Novelist: A Novella. Additional photos and post by LW Lindquist.