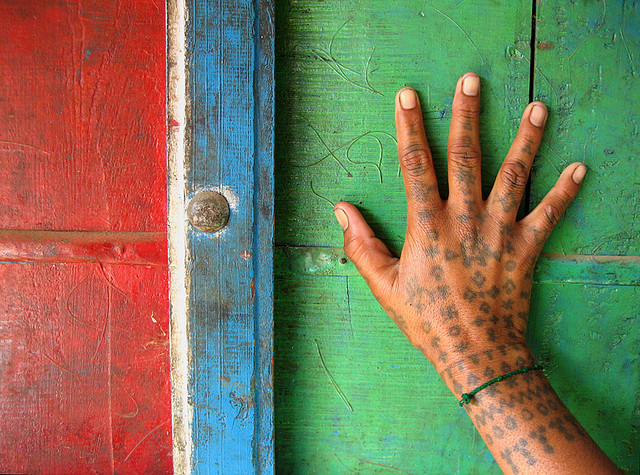 Once the terrain of drunken sailors and circus freaks, in the past twenty years the American tattoo parlor has attracted individuals as diverse as our nation’s population. Whatever the motivation or background, no matter how large or small the design, baring your flesh to the tattooist’s needle initiates you into the tribe–a tribe that has grown enormously in recent years. (Dorothy Parker’s Elbow, Addonizio and Dumesnil)

Whether one is inked from head to toe or repelled by the very notion of a tattoo, there’s no escaping that tattoos fascinate. In Dorothy Parker’s Elbow, editors Kim Addonizio and Cheryl Dumesnil suggest that “Behind every tattoo stands a story that people want to hear.” They’ve collected those stories in this collection, “Tattoos on Writers, Writers on Tattoos.”

Well-known writers from Flannery O’Connor and Ray Bradbury to Sylvia Plath and Franz Kafka weigh in alongside Mark Doty, Madame Chinchilla and Karol Griffin in essays, short stories and poems about the tattoo.  From the intricacy of the design to the intimacy of its placement on the skin, the tattoo is highly a personal act, often tapping into “existential questions: Who are you? Where do you belong?” While tattoos can be the result of a drink too many, they can also be profound statement of identity, as in Deena Metzger’s tattoo surrounding her mastectomy scar.

Join us in September for a new book club exploring this collection of tattoo literature, starting September 4. For the first week, we’ll consider the selections beginning with Bradbury’s “The Illustrated Man” through Elizabeth McCracken’s “It’s Bad Luck to Die.”

Buy a year of Every Day Poems, just $5.99 — Read a poem a day, become a better poet. In August we’re exploring the theme Bottled and Canned.