It’s one of the things you can count on at Tweetspeak Poetry. In fact, our site first started as a result of joking between friends. We operate under a banner of Self-Fulfilling Comedy. So much so that when in the midst of a virtual staff meeting on a Monday morning, an editor cracks a joke about celebrating Take Your Poet to Work Day, mental notes are made and ideas are revisited, until one day we’re publishing poet cut-outs for happy (or soon to be happy) workers to put on sticks.

Because here’s something we hold true: a moment of play in the midst of our very serious lives can be simply that, a moment of play. But sometimes, it can be a link in a chain of events that ultimately enables us to discover and become who we really are.

Just this week, in fact, I overheard the managing editor say we aim “To take seriously our whimsy. To live in our laughter.”

On Wednesday, July 17, we celebrated the very first Take Your Poet to Work Day, and folks carried their poets on a stick into workplaces (and play places) around the world. Here’s just a sampling of the fun we saw on Twitter, Facebook, and Instagram:

We understand that extreme introvert Emily Dickinson had major reservations about the day. In fact, from her covert Twitter account, she informed us beforehand that she would likely be unwilling to participate:

@tspoetry chances are more than likely that I would rather not go to most people’s places of employment. Of course, Dickinson lovers were not to be deterred. Chances are that there were more sightings of the reclusive poet than any other yesterday. She was brightly colored, taped, and carried off despite her protests. Well, but there was Laura Brown, who discovered after searching for the poet all day long that she had thrown herself face down onto the living room floor while Neruda and Eliot went happily out the door. We also saw Dickinson eating sandwiches and ice cream, hiding out in various pencil cups, enjoying the fair, and reportedly breaking office equipment.

It’s not that Emily was prickly, exactly.

My #poettowork, Emily Dickinson, an I had a great day at work today. Except she broke my clock. Ok, I did it….. pic.twitter.com/yiKfsju9EB

Emily was last seen retreating behind the security of her door:

Some of the Other Guys 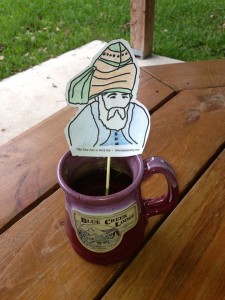 We saw the other poets scattered all over the internet, though we heard rumors that perhaps Rumi and the Haiku Masters felt left out. Megan Willome was sure to remedy this by inviting Rumi in for tea on the morning after, saying on Facebook, “Rumi felt left out yesterday during Take Your Poet to Work Day, so I invited him over for some silver needles jasmine tea. He said it’s all good, all love. Something got lost in translation.”

Other poets were seen in the office, the popular pencil cup resting place, shopping, attached in various ways to their hosts, and even the pool.

Ann Kroeker reported that Poe was “troubled by the greeting card poetry.”

A couple of fellas made time for a panel at the Tin House seminar:

Tip for next year’s Take Your Poet to Work Day: Zip-Loc your poet if you take him to the pool.

Perhaps there’s a reason Rumi didn’t get the love:

And Poe and Eliot go salon:

If we learned anything, it’s that poets seem to love coffee.

Office Eliot measures out his life in coffee spoons and post-its. #poettowork pic.twitter.com/4pZnllTUfA

The Poet-on-a-Stick Seen ‘Round the World

We were delighted to have participation from around the world. We started the day bright and early with this montage from Adelaide Festival in Australia: 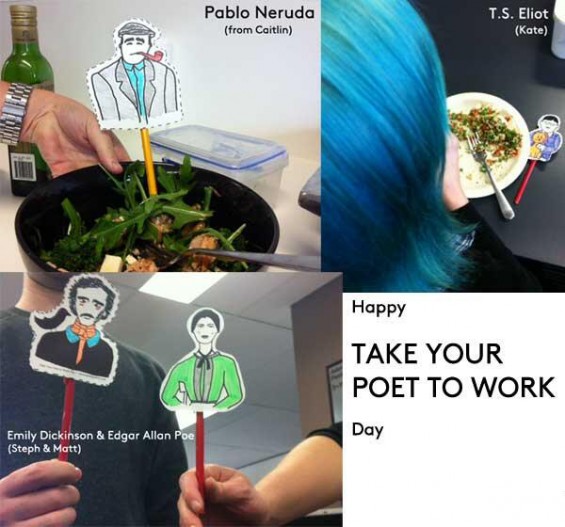 Folks also celebrated in Ireland, the UK and Israel. We saw tweets in Spanish, Dutch, French, Czech, Hebrew, and Turkish. Poetry International and the Poetry Trust got in on the act, as well as Poetry Foundation, the New York Observer,  The Atlantic and the Paris Review.

So Many Poets, So Little Time

We offered a handful of dressed-for-work poets. Many creative folks, not finding their very favorite, made their own.

The famous Alexander Pushkin is with me today for Take Your Poet to Work Day! #poettowork @PushkinPress pic.twitter.com/CMQv9yzdxO

And some things just made us laugh.

The Raven had an albino cousin?

@PoetryFound @tspoetry I take my poet to work every day. He mostly cries near the coffee machine. — CJ Evans (@snavejc) July 17, 2013

Mathew Block planned a full day for John Donne, including a trip to the airport. Click through to see the rest of Donne’s adventures for the day. Adam Webb made an astute observation in the comments at Tweetspeak:

This brilliant initiative has unintentionally raised awareness of an important problem in modern workplaces: lack of sticks.

So, yes. Serious play. All over the world on Wednesday, grownups took the time to cut out and color a poet. They took their poet on a stick to work, and at various times during the day, played. This is something we all need. Play is, as I was reminded yesterday, “permission to love.” You might not see that any better illustrated than with the way Heather Eure put T.S. Eliot to bed after a long day of #takeyourpoettoworkdayproblems. Cover photo by Sonia Joie. Post by Will Willingham.

Buy a year of Every Day Poems, just $5.99 — Read a poem a day, become a better poet. In July we’re exploring the theme Rock and Roll.