We’ve started putting poems on the outsides of buildings in Uptown Charlotte. (Uptown = downtown, its own story.)

There are a few reasons for The Wall Poems of Charlotte. Poetry is, among other things, a visual art form. There are a lot of bare walls here. But, in the main, this project exists because people deserve to encounter poetry.

“The necessity for poetry is one of the most fundamental traits of the human race…
Without poetry the soul and heart of man starves and dies.”
–Amy Lowell

Poetry in Motion in New York City puts poems or excerpts on subway and bus posters. Violent crime rates rose through the 1980s and early 1990s, but they began to decline in 1992, the year Poetry in Motion hung its first posters, and continued to do so through 2008, when the project went on hiatus.

Coincidence? (Don’t bring up Giuliani; this is a beloved theory that defies argument.)

A poem has blood and guts; it can whisper and it can yell. But its limited and too-rarefied quarters hinder its ability to fully do what it can. People deserve access to poetry, which belongs to them. So why not paint poems onto buildings?

We finished the first one here in April. It’s not a new idea. The Leiden Walls in Holland feature 101 poem murals in their original languages, and they’re gorgeous and mesmerizing and absolutely right. We may not make it to 101, but we’re working on our next four now, with the aim of creating a walking tour.

The Wall Poems of Charlotte are by North Carolina writers: folks who were born, lived, worked, or taught here. The Black Mountain College legacy includes the work of Charles Olson, Robert Creeley, and Ed Dorn and could cover blocks of any city; we claim Randall Jarrell, Carl Sandburg, and A.R. Ammons, the project’s first poet; and we have a long list of writers making important poems today.

What is new is that the designs are by graphic design students from Central Piedmont Community College, where I teach English. Student Jennifer Raudales created the first mural. Mural artist Scott Nurkin, a wizard, then painted it on the wall given to us by Kevin Devin of Dandelion Market. We were sponsored for the first mural by a law firm and a construction company who became passionate about the project (Johnston, Allison & Hord, PA, and Rodgers Builders, Inc.). The result is, happily, better than we ever imagined.

“Put to no new use, the art rots.”
–Robert Pinsky

I build assemblages around my poems. My partner and art director, Graham Carew, incorporates text into his paintings. The Wall Poems of Charlotte are a natural extension of our impulse toward new uses, and we hope they will help a bit to deliver poetry to the people—to whom, of course, it has always belonged.

Post by Amy Bagwell, director of the Wall Poems of Charlotte. Cover photo by Taryn Rubin; inside photo by James Bazan. Used with permission. 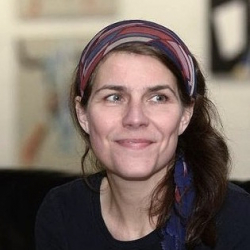 Amy Bagwell
Amy writes first. Her poems are the basis for her artwork. Each piece is a narrative in found images that crosses time and is a poem’s environment, backstory, freezeframe. Most of the time, the finished work includes the poem’s text, but not always. Amy has co-founded Wall Poems & Goodyear Arts.

Amy writes first. Her poems are the basis for her artwork. Each piece is a narrative in found images that crosses time and is a poem’s environment, backstory, freezeframe. Most of the time, the finished work includes the poem’s text, but not always. Amy has co-founded Wall Poems & Goodyear Arts.