I fantasize taking in hand Claes Oldenburg’s stainless steel and cement Typewriter Eraser, Scale X (1999) and, just like that, rubbing out all the negatives: “Do not touch the artworks.” “Do not ride bicycles or use in-line skates and skateboards.” “Only service animals are allowed.” “Alcoholic beverages are prohibited.”

But rules can make the poetry possible in Washington, D.C., where even in these days of sequestration, entry to the National Gallery of Art Sculpture Garden remains free. Usually, I find my way to the gates via Constitution Avenue and 9th Street, N.W., one of six public entrances. Once inside, I let the noise of commuter traffic fall away and the art call me to response.

Unlike the vast Storm King Art Center in New York, occupying some 500 acres, the NGA’s Sculpture Garden, surrounded by decorative metal fencing, is enclosed within a 6.1-acre block, near the gallery’s West Building, designed by John Russell Pope and itself a kind of classical poem in pale pink Tennessee marble.  Also unlike Storm King, the Garden is open daily; in winter, its central fountain serves as locals’ own public ice rink and, in summer, jazz concerts liven up the surroundings in a way that prohibited alcohol never does.

Those who go to the Garden for the art are as richly rewarded as those who stroll about looking for Chocolate cosmos, Japanese anemone, or even resident ducks (see plantings). The sculptures all come from the NGA’s collection, and their makers’ names tend to be familiar: Louise Bourgeois,  Alexander Calder,  Mark di Suvero,  Ellsworth Kelly,  Roy Lichtenstein,  Joan Miro,  David Smith,  among others.

I have my favorites. Magdalena Abakanowicz’s 30 small bronze Puellae (Girls) (1992) are astonishing to come upon, like a suddenly sparked memory, never again to be lost. The “Girls” are the artist’s haunting response to an account she heard in her youth about children who froze to death while being transported from Poland in cattle cars to Hitler’s Germany. No matter how many times I see them, I am moved to tears by these silent, headless figures that Abakanowicz invests with such forceful presence. They appear to be of the earth itself, once laid down but again and again rising from it, triumphant.

Scott Burton’s polished red granite Six-Part Seating (1985/1998) just makes you want to take a break and kick back, especially if you’re in the Garden in D.C.’s summer heat. Like Abakanowicz’s figures, Burton’s chairs can be rearranged, in a circle (think pow-wow) or side by side (think ballet barre). Whatever their configuration, they’re always inviting.

If, as I am, you’re a Rodin fan, you’ll walk away cheered after seeing Barry Flanagan’s Thinker on a Rock (1997). The witty artist’s cast bronze hare — don’t dare call it a rabbit — does its best conceptualizing perched high above the crowd.

I always want to play house with Roy Lichtenstein’s House I (1996/1998) of fabricated and painted aluminum. An oversize cartoon cutout, its heavy black outlines, red shutters, blue roof, and yellow and white siding recall learning to how to color inside the lines in elementary school… and hating it. What gets me every time is the 3-D effect Lichtenstein achieves with House. It’s just an illusion, the way House seems both to move toward and recede from, and it’s magical.

And then there’s Calder’s huge and muscular Cheval Rouge (Red Horse) (1974), realized in painted sheet metal. Its strength-derived-from-size roots it in place, the elegant legs spread wide and the neck drawing the eyes skyward, where possibility always opens up.

There’s respite to be found in the Sculpture Garden. Its beauty refreshes, and its sculptures surprise, stimulate, and fill this viewer with joy. 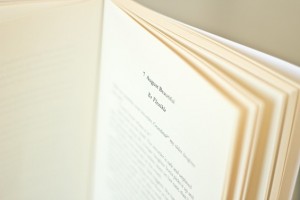 Ready to get serious about your writing?

Sign up now for one of our three new Creative Writing workshops this summer, starting June 17.