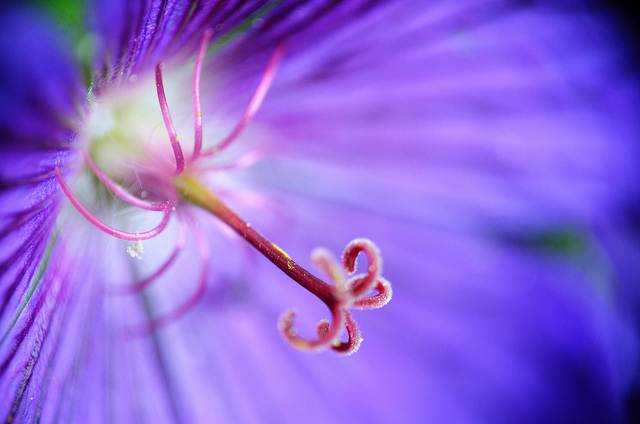 I must have been twelve, in the limbo between bra and Barbie, when a children’s nature magazine came in my name with photos I had hoped would inspire something new out of my quiet country life. For me it was all dogs in the yard, catfish in the pond, and honeysuckles choking the life out of pines. I remember the magazine was boring, but there was a centerfold, and who doesn’t get excited with a centerfold? It wasn’t a grand map as with National Geographic, no, but it was a large poster of a purple flower. I unfolded it and tacked it to the back of my bedroom door.

The lens had zoomed in close, and you could see the petals soft like skin, balancing drops of dew in morning light. It seemed to go with the girlish theme of my room, the flowering wallpaper border on the walls. Beneath the purple flower was printed this:

She went as quiet as the dew
From a familiar flower.
Not like the dew did she return
At the accustomed hour!

I repeated it to myself aloud. Again and again I would say it under my breath, and it became mine. I felt strange inside, as I suspected Dickinson had. I learned about her as I looked for other words. Death in the rhyme, the loneliness, the dew, and the snake—all of it became that thing inside me I couldn’t put my finger on.

That’s how it was for me with poetry. There were things that haunted: what was in our attic or in the bottom of the well? Why God and sex and death? Why not rock-n-roll? It was poetry that acknowledged invisible things, the things that haunt us.

I knew then, because of Emily Dickinson and my Hello Kitty journal, that I would grow to be a writer. I never changed my mind about it. I would flunk math but walk in on my English teacher and see tears floating in her eyes. Words move people.

In college, my professors were poets. Give me a poet over the president, over any star in Hollywood. I entered workshops, and we sliced and diced each other. I learned quickly that it’s not all for me. I enjoyed the parameters and the arduous pursuit of sound and sense, but most of the time it felt devoid of meaning, as in – I didn’t understand a word of it. The non-academic truth about poetry is that much of it doesn’t speak to me because sound alone isn’t enough to trump life.

Two years into an MFA in poetry, the love of it had disappeared. Three years after leaving the Program, I had birthed three boys, and in that time had turned my back on the words, until life did what it does and I had a miscarriage. Poetry was the only way I managed to navigate it.

It’s been years since then, and even now it hits me just right. “She went as quiet as the dew.” Poetry helps me remember. Amber Haines
Amber boasts an accent thick with Alabama and Tennessee sorghum—and peppered with pine. She is a writer and the author of the memoir Wild in the Hollow.

Amber boasts an accent thick with Alabama and Tennessee sorghum—and peppered with pine. She is a writer and the author of the memoir Wild in the Hollow.